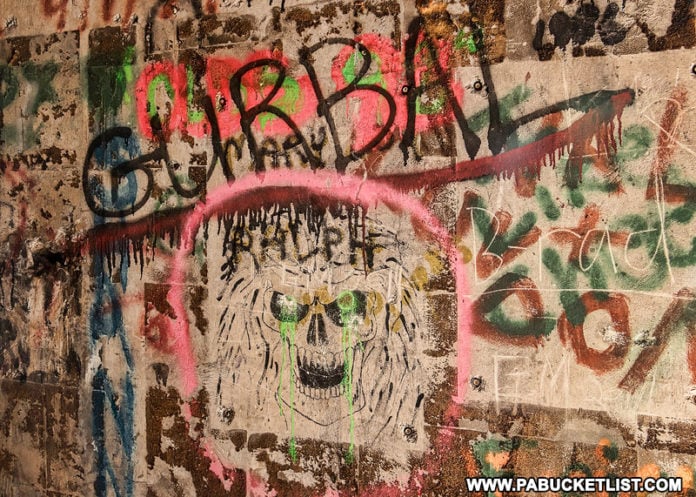 Forget about fake haunted houses and characters in Halloween costumes.

Here are 8 REAL spooky-sounding hikes you can take in Pennsylvania!

Legal Disclaimer: By voluntarily exploring these locations, YOU assume the risk of any personal injury or damage to personal property, and shall not hold the author liable for any injuries, loss, or damages that may occur while visiting these locations.

Do you dare step foot into one of the two ominous-looking, unlit tunnels along the Abandoned Pennsylvania Turnpike?!

This 13 mile-long hiking and biking trail in Bedford and Fulton counties gives off a serous post-apocalyptic vibe, and certainly deserves a spot on any list of Pennsylvania’s spookiest hikes.

From the foreboding tunnels to the long stretches of eerily-silent highway in between, the Abandoned Pennsylvania Turnpike is something everyone should experience at least once in their lives.

The abandoned Alvira bunkers in Union County are literally built on top of a ghost town – how’s that for spooky?!

In 1942 the US government used the courts and eminent domain to force the residents of Alvira to sell their land and homes, so that the town could be leveled and converted into a TNT factory and munitions storage facility for the war effort.

But less than a year after the Pennsylvania Ordnance Works opened, it was shut down and eventually abandoned.

All that remains of the town now are the cemeteries, the remnants of roads, and 149 concrete bunkers that were built to store TNT.

Wandering the abandoned, overgrown roads of Alvira gives you a disquieting feeling that you’re not alone.

And of course the cemeteries are a reminder that some of the original residents really are still here, if only in spirit.

The abandoned Alvira bunkers on State Game Lands 252 are another deserving member of the spookiest hikes in PA club!

In something right out of a James Bond flick, the secretive nuclear jet engine testing bunkers in Cameron County were originally built with intentions to develop a Cold War super-weapon – jet-powered fighter planes and bombers that never needed to land for refueling!

By 1960, the project had been scrapped and the testing area abandoned.

Now all that remains where scientists once worked are stark concrete walls, creaky steel doors, and 60 years worth of graffiti.

Time and the Earth are slowly swallowing up the abandoned nuclear jest engine testing bunkers in the Quehanna Wild Area, only adding to the grim and oddly-bizarre vibe this short hike gives off.

Despite the spooky-sounding name, the Hell’s Hollow Trail at McConnells Mill State Park is short, mostly flat, and leads to a very heavenly scene.

The name Hell’s Hollow refers to the limestone kiln that once operated in the hollow near the falls, giving off a foul odor, belching smoke, and producing an ominous red glow as limestone was burned in the kiln to produce lime.

Today the only thing scary about the Hell’s Hollow Trail is the name itself – the hike itself is quite pleasant!

One of the scariest-sounding hikes in all of Pennsylvania, the Shades of Death Trail is actually a peaceful stream-side hike with several idyllic scenes along the way.

The highlight of the Shades of Death Trail at Hickory Run State Park is Stametz Dam, a man-made spillway that looks more like a graceful waterfall.

The most frightening thing about the Shades of Death trail is trying to find a parking spot on a summer weekend – the hike itself is a sheer pleasure!

6. The Ghost Town of Scotia

On the outskirts of State College in Centre County lies the remains of the ghost town of Scotia.

This iron-mining boomtown prospered for nearly 30 years, then disappeared as the quantity and quality of iron ore dried up, leaving the ruins to be reabsorbed by what is now State Game Lands 176.

Scotia and the area around it is supposedly haunted by the ghost of confessed murderer Bert Delige, the last person publicly hanged in Centre County and buried in an unmarked grave nearby.

The so-called “Black Ghost of Scotia” is rumored to be most active around the anniversary of his hanging, which occured on April 25th, 1911.

The massive, decommissioned Cresson State Prison complex in Cambria County is one of the spookiest places I’ve ever personally explored!

With dozens of buildings to see, spread out over acres of land, a visit to the abandoned Cresson State Prison makes for a fantastic adventure.

When the Austin Dam in Potter County burst on September 30, 1911, it lead to massive devastation downstream and the deaths of at least 78 people.

Today, 110 years later, the ruins of Austin Dam still stand in a park dedicated to the memory of those victims.

Austin Dam Memorial Park is a beautiful but sobering destination to explore, with trails through the towering ruins of the dam providing an up-close look at what caused the second-deadliest flood disaster in Pennsylvania history.

The now-abandoned paper mill was rebuilt after the flood in 1911, but ultimately succumbed to fire in 1944.