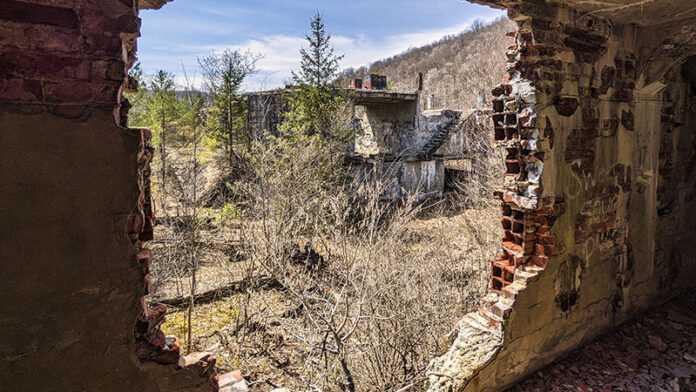 The abandoned Bayless Paper Mill in Potter County is part of a planned 329 acre park and interpretive center dedicated to telling the story of the paper mill, the dam built to sustain in, and the disastrous 1911 flood that resulted when that dame broke, killing at least 78 people and devastating both the mill and the surrounding town of Austin.

As of 2021, much remains to be done to bring the full vision for this park to fruition, but the Austin Dam Memorial Park around the ruins of the failed dam itself is already a popular tourist attraction in Potter County.

The proposed south entrance to the park that encompasses the abandoned Bayless Paper Mill is still very much a work in progress, but in recent years a white-blazed hiking trail connecting the dam ruins to the north to the paper mill ruins has been completed.

What I’ll share with you here is a brief history of the Bayless Paper Mill and the associated flood of 1911, as well as my observations from a recent visit to the ruins of both the dam and the paper mill.

By voluntarily exploring this location, YOU assume the risk of any personal injury or damage to personal property, and shall not hold the author liable for any injuries, losses, or damages that may occur while visiting this location.

History of the Bayless Paper Mill

By the year 1900 the tiny town of Austin in Potter County had experienced floods, fires, and a declining local economy as the hemlock forests that fueled the area timber mills had been clear-cut in the years before.

The smaller “pulp wood” trees that grew up where the clear-cut hemlocks once thrived were attractive, however, to industrialist George Bayless, who saw the area as a prime spot for a pulp and paper mill.

Construction of the Bayless Paper Mill began in 1900, and many in the area welcomed the mill and the jobs it created.

Because the paper mill required a reliable, year round source of water to operate, Mr. Bayless had a large concrete dam built in 1909 a half-mile upstream from the paper mill, to replace an earthen dam on Freeman Run that had proven to be inadequate.

George Bayless ignored several key safety recommendations to save money during construction of this 50 foot-tall, 530 foot-wide dam, and the result was catastrophic.

On September 30, 1911 the dam broke, unleashing 400 million gallons of water in a torrent that tore through the narrow valley, destroying the paper mill before reaching and destroying most of Austin as well.

The Bayless Paper Mill was rebuilt after the flood, and remained operational until a massive fire in 1944 caused it to close forever.

Today, only the charred and deteriorating remains of this once-mighty operation remain, standing in silent tribute to those who worked and those who died on that site over the years.

There are several ways to see the ruins of the abandoned Bayless Paper Mill in Potter County.

The easiest by far is simply to stop at the roadside pull-off along Route 872, just north of Austin, where you are separated from the ruins by Freeman Run and some rather thick vegetation.

If you’re looking for just a quick glimpse of the Bayless Paper Mill Ruins before continuing on to the Austin Dam ruins, then this is your spot.

The Bayless Paper Mill Trail is a 0.8 mile, white blazed trail that begins at the campground near the Austin Dam ruins, and follows the right side of Freeman Run downstream to the paper mill ruins.

A trail map on display at the pavillion near the Austin Dam ruins lays out the trail, as well as describes the buildings you’ll see at the end of the trail.

The trail is essentially flat, reasonably easy to follow, and along the way you’ll encounter some remains of the pipes that carried water from the dam to the paper mill.

The second half of the Bayless Paper Mill Trail follows a dirt road, which brings you out on a hillside next to the “Papermill Tower”.

By far the tallest structure still standing on the site, the abandoned Bayless Paper Mill Tower is an impressive spectacle.

Composed of three “legs”, the tower conjures up images of a decaying Middle-Ages castle.

A smaller but still impressive structure next to the tower is empty, except for some old tires and a few rusty bicycles.

No interpretive signage exists in this portion of the park, so I’m not sure what the function of the tower and adjacent building was (if you know, feel free to email me).

Just down the hill from the tower, along an obvious and well-worn trail, lie the main buildings that comprise the Bayless Paper Mill ruins.

Although these ruins are incorporated into the master park plans for the area, there are currently no trail improvements or safety measures of any kind in place in and around these buildings that made-up the Bayless Paper Mill.

For that reason, I would encourage you to simply view the ruins from a distance, and if you do choose to explore them up-close, know that you do so at your own risk!

Having said that, on the early spring morning I visited to take these photos, a large group of local kids were hanging out in the buildings, and from the amount of graffiti on the walls it seems the ruins are a popular spot for teens to congregate.

Stalactites have formed on the ceilings of the buildings as water leaches through the concrete.

Basements are a dark, flooded labyrinth.

Rooftops are now open to the sky.

Some stairways lead to nowhere.

Others seem to lead to an abyss.

Again, without any sort of interpretive signage, I’m simply not sure what the function of each building was at the Bayless Paper Mill.

Hopefully if/when the park is completed, that sort of historical information will be displayed.

Until then, we can still appreciate the workmanship that went into these structures that have withstood flood, fire, and the ravages of time.

Remarkably, more than 100 years after that disaster, the Austin Dam, as it has come to be know, is still standing.

So to are the remains of the Bayless Paper Mill, the enterprise for which the dam was built to serve.

Hopefully the Austin Dam Memorial Park will continue to evolve, and all of these incredible structures and their stories can be preserved and interpreted for a new generation of Pennsylvanians.

If you’d like to camp at the Austin Dam Memorial Park, you can, and you’ll find all the details HERE.

The Austin Dam Memorial Park is dedicated to those that lost their lives in the 1911 flood resulting from the failure of the Bayless Paper Mill Dam, to this day the second-deadliest flood in Pennsylvania history.

The Fred Woods Trail in neighboring Cameron County takes you on a loop hike past an ancient “rock city” as well as two fantastic mountain vistas.

The 20 Best Scenic Overlooks in PA Elk Country introduces you to some of the finest vistas in the PA Wilds region of Pennsylvania.

If it’s elk you seek, The 15 Best Elk Viewing Destinations in Pennsylvania is the roadmap you’ll want to follow!

Exploring the Ridge Road Vistas in the Elk State Forest will introduce you to Pennsylvania’s most scenic State Forest road, featuring 6 world-class ROADSIDE vistas along a 3 mile stretch of road.

Want to make your trip to the Abandoned Bayless Paper Mill even MORE epic?

Browse HUNDREDS of awesome cabins, lodges, and chalets near the Abandoned Bayless Paper Mill at the Vrbo link below.