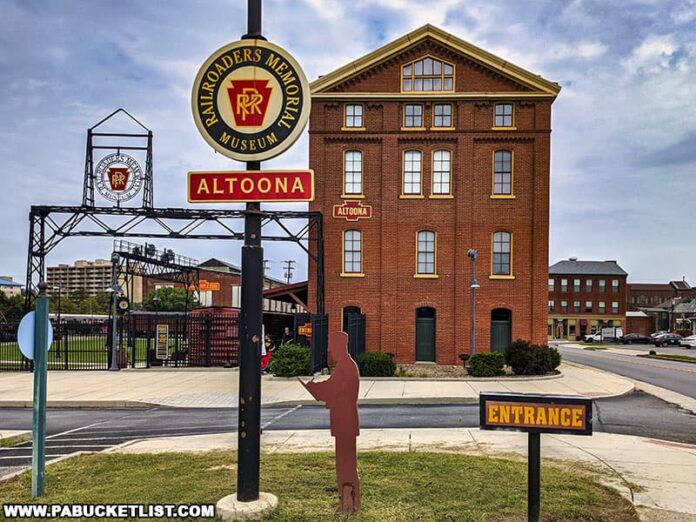 The Altoona Railroaders Memorial Museum uses artifacts, film clips, and life-size dioramas to tell the story of how Altoona became known as “Railroad City” in the 1800s.

Spread out across three floors of the former Master Mechanics Building of the Pennsylvania Railroad, this historic brick structure is the last remnant of what was once the largest railroad shop complex in the world.

The first floor of the museum deals with the history of Altoona itself, it’s role as a “company town”, and why geographically it was important for the Pennsylvania Railroad to have repair shops based in the center of the state, at the foot of the Allegheny Mountains.

The first floor is also home to an extensive gift shop (naturally!).

The second floor of the museum is my favorite, as it deals with the everyday life of the railroad workers and their families.

You’ll see life-size dioramas of how they worked.

And how they prayed.

All sorts of railroad-themed memorabilia can be found on the second floor as well.

The third floor of the museum is dedicated to the Pennsylvania Railroad itself.

Here you’ll find artifacts of all sorts related to the Pennsylvania Railroad, as well as a model train exhibit.

On the grounds surrounding the main Railroaders Memorial Museum building, you’ll find a number of engines and cars (“rolling stock”, in railroading terms) on display.

The “roundhouse” next to the museum is where repairs and restoration are performed on the museum’s rolling stock.

The Altoona Railroaders Memorial Museum is generally open Wed-Sun from 10am-5 pm, but in the age of COVID, it would be wise to check the museum’s OFFICIAL WEBSITE for the latest hours and admissions rules BEFORE visiting.

Considered one of the “engineering wonders of the world” at the time of its completion in 1854, the Horseshoe Curve continues to offer railfans an up-close opportunity to experience the thrill of trains passing by along this 2,375 foot-long curved stretch of tracks.

The Gallitzin Tunnels are a favorite of railfans and “trainspotters” in neighboring Cambria County.

The 5 Best Railroad Overlooks Near Altoona is your guide to some great “trainspotting” destinations near Altoona.

The East Broad Top Railroad in Huntingdon County is once again offering passenger excursions, shop tours, and visits to the “roundhouse”, after a decade-long hiatus.

The Lehigh Gorge Scenic Railway in Jim Thorpe, PA is consistently ranked as one of the best sightseeing trains in the northeastern United States.

12 Must-See Attractions in Blair County is your guide to some of the most amazing natural and man-made attractions in the area.