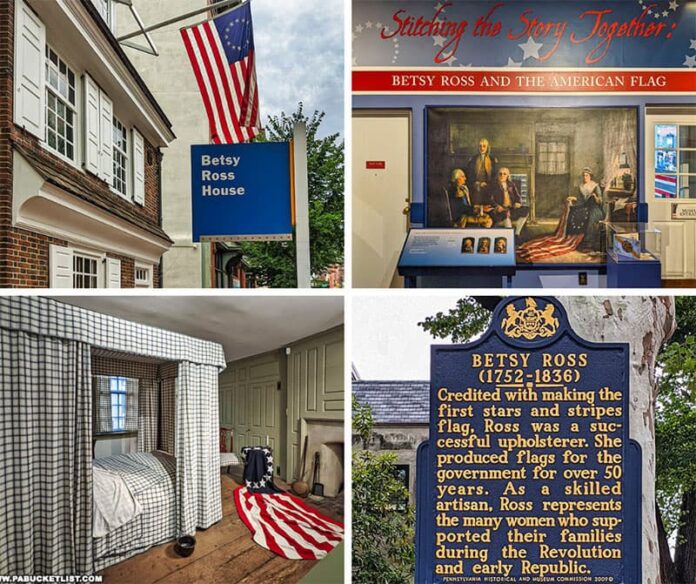 If you’re looking for information about visiting the Betsy Ross House in Philadelphia, you’re in the right place!

The Betsy Ross House is one of Philadelphia’s most popular tourist attractions, said to be the site where Betsy Ross sewed the first American flag in late May, 1776.

While some historians consider the “first flag” story more mythology than fact (citing a lack of corroborating evidence), the Pennsylvania Historical and Museum Commission acknowledged her contribution to American history in 2009 with the installation of this official marker in front of the Betsy Ross House.

The Betsy Ross House is located at 239 Arch Street in Philadelphia’s Old City, just a few steps away from Christ Church, where Betsy Ross worshipped, and also where she married her third husband, John Claypoole.

Admission prices for the Betsy Ross House are $8.00 for adults and $6.00 for children/seniors/military/students.

What You’ll See at the Betsy Ross House

The Betsy Ross House was first opened as a museum in 1898, renovated in the 1930s, and has been restored to how it would have appeared in the late 1770s, with period-correct artifacts and modern interpretative signage.

On the first floor you’ll find Betsy’s upholstery shop, which is where she is said to have met with George Washington, Robert Morris, and George Ross to discuss sewing the first American flag.

At the time she was approached to make the flag, Betsy was a young widow running her own upholstery business.

On the second floor of the house you’ll see a reproduction of Betsy’s bedroom, where she would have sewn the flag in secrecy.

Creating the flag would have been considered an act of treason against the British Crown, and there were still many Philadelphians loyal to King George III, even after the Revolutionary War started.

In fact, during the winter of 1777, Betsy’s home was forcibly shared with British soldiers occupying Philadelphia, a possible reason why no “paper trail” of her creating the flag exists.

She and her third husband, John Claypoole, are buried in a garden next to the courtyard outside the house.

The Betsy Ross Legend and Legacy

The story of Betsy Ross and the first American flag was not well known outside of her family until around the time of the U.S. Centennial in the 1870s.

However, by the time of the Bicentennial in 1976, her name was so well-known that it was being used to sell all sorts of products, cashing in on the patriotic fever of the times.

To this day it’s hard to walk around a flea market or antique store and not see at least one Betsy Ross-themed knick-knack.

The legacy of Betsy Ross is one of perseverance in the face of a tragedy, and although her role in creating the first American flag may never be “definitively” proven, the story has endured all the same.

It is entirely plausible that in the face of the impending British occupation of Philadelphia in late 1777, if any paper trail did exist linking her to the “rebel flag”, it was destroyed in the name of self-preservation.

Of course you can tour the home, enjoy the exhibits, and come to your own conclusions when you visit the Betsy Ross House in Philadelphia, a shrine of American liberty!

Christ Church in Philadelphia is famous for its ties to the American Revolution, with many of the Founding Fathers including George Washington, John Adams, and Benjamin Franklin attending services there, in addition to Betsy Ross.

The Museum of the American Revolution in Philadelphia uses historic artifacts, dioramas, short films, paintings, and other exhibits to tell the story of the Revolutionary War in America.

Eastern State Penitentiary in Philadelphia is America’s most-historic (and some say most-haunted) prison!

Visiting the Rocky Statue and Steps at the Philadelphia Art Museum is your guide to paying homage to Philly’s favorite fictional son!