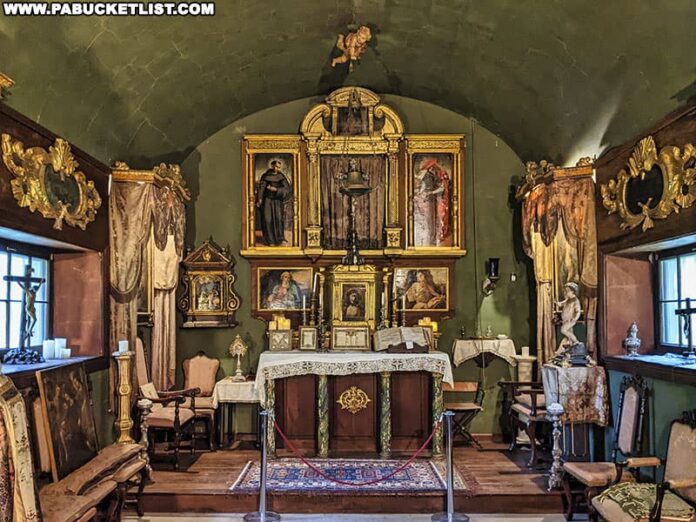 The Columbus Chapel in Centre County contains the largest and most important collection of Christopher Columbus artifacts and memorabilia on the North American continent!

The Boal family has graciously opened both the Columbus Chapel and Boal Mansion up to visitors, so that you can experience first-hand this treasure-trove of priceless artwork and artifacts dating back centuries!

The Visitor Center at the Columbus Chapel and Boal Mansion

Tours of the Columbus Chapel and Boal Mansion begin at the Visitor Center, a carriage house originally built in 1898.

Tours are currently being offered by reservation only – call 814-466-6210 to schedule a visit.

Admission is $10 for adults, $6 for children 6-17 years old, and FREE for children under 6 or active duty military members.

The admission price includes tours of both the Columbus Chapel and the Boal Mansion, and the tour takes approximately 90 minutes.

Touring the Columbus Chapel in Boalsburg

The Columbus Chapel was part of the Columbus family castle in Asturias, Spain.

The castle was inherited in 1908 by Mathilde de Lagarde Boal from her aunt, Victoria Columbus.

Mathilde’s husband, Colonel Theodore Davis Boal, built an exact replica of the Columbus castle’s chapel on the grounds of the Boal Mansion and had the entire contents boxed up and shipped to Pennsylvania in 1909.

Among the contents of the chapel are oil paintings and statues from the 14th through 17th centuries.

Perhaps the most fascinating artifact on display at the Columbus Chapel is the one pictured below, containing two pieces of the True Cross of Jesus.

This priceless religious object was given to the Columbus family in 1817 by the Bishop of Leon in Spain.

To have relics of this magnitude and beauty on display at a small chapel in central Pennsylvania is truly remarkable, and worth the price of admission on its own!

The Columbus Vault is adjacent to the Columbus Chapel, and contains among other memorabilia, a sea chest used by Christopher Columbus on one of his trans-Atlantic voyages.

The vault also contains a scale model of the Santa Maria, the largest of the three Spanish ships used by Christopher Columbus in his first voyage across the Atlantic Ocean in 1492.

Touring the Boal Mansion in Boalsburg

The Boal Mansion has been in the Boal family for over 200 years, although it started out as a simple stone cabin in 1809.

David Boal, who built that original stone cabin, was a Scottish-Irish pioneer who founded the village of Boalsburg around a tavern he built in 1804.

Succeeding generations of the Boal family added onto the original house, and in 1978 it was added to the National Register of Historic Places.

The Boal Mansion contains the original furnishings, papers, portraits, and memorabilia from nine generations of the Boal family.

One of the more interesting items on display is a piano that resided in the White House for more that 90 years.

You’ll also find the first telephone ever used in Boalsburg.

An opulent ballroom is still used for piano recitals and special events.

Seemingly every square inch of the Boal Mansion contains an artifact or memento related to the Boal family’s history and travels.

Directions to the Columbus Chapel and Boal Mansion

The Columbus Chapel and Boal Mansion are located at 163A Boal Estate Drive, Boalsburg, PA 16827.

And as a reminder – tours are available by appointment only; you must call 814-466-6210 to schedule your visit ahead of time.

The village of Boalsburg in Centre County is recognized as the birthplace of Memorial Day in the United States.

A monument and plaques commemorating the birth of this national tradition stands just off of Route 322 in Boalsburg.

The Pennsylvania Military Museum in Centre County (located directly across the road from the Columbus Chapel) honors the service of Pennsylvanians in all branches of the military, from colonial times to the present day.

Centre Furnace Mansion in State College served as the home for a series of “iron masters” in the late 1700s through the mid 1800s, and is also the birthplace of Penn State University.