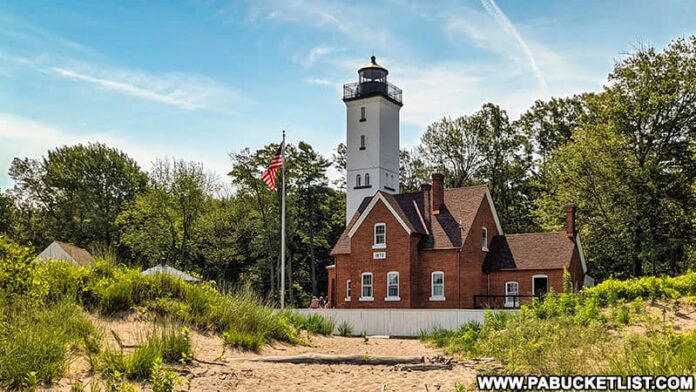 Erie, Pennsylvania is home to three historic lighthouses, all of which helped mariners navigate their way along the shores of Lake Erie and into or out of the Erie harbors and Presque Isle Bay.

And while GPS satellites have made the Erie lighthouses less important for navigational purposes in modern times, they are no less beautiful now than they were when constructed more than a hundred years ago.

So what I’d like to share with you here are brief histories of each Erie lighthouse, photos of what you can expect to see if you visit them in person, and directions to each one.

The Presque Isle Lighthouse is the most famous and most photogenic of the three Erie lighthouses.

Initially, the square brick tower was only 40 feet high, but an additional 17 feet-4 inches were added to the tower in 1896, to allow light from the lighthouse to project out further over Lake Erie.

The top of the lighthouse is accessed via 78 steps with 6 landings on a spiral staircase.

The view of Lake Erie from the top of the Presque Isle Lighthouse is outstanding!

The old oil lamp has been replaced by a modern LED light.

Before roads were installed on Presque Isle, the lighthouse was resupplied by periodic visits from supply ships that docked at a nearby pier, the remnants of which you can still see jutting out into Lake Erie.

The attached nine room dwelling served as home to the lighthouse keepers and their families until 1944, and it now serves as a lighthouse museum.

A Fresnel Lens (a device that magnified the power of an oil lamp) is one of the many interesting artifacts on display in the Presque Isle Lighthouse museum.

The Presque Isle Lighthouse is open 7 days a week from 10 a.m. to 5 p.m. between Memorial Day and Labor Day.

The Presque Isle Lighthouse parking lot is located at GPS coordinates 42.165888, -80.113684, alongside Peninsula Drive on the north shore of Presque Isle State Park.

The North Pier Lighthouse is located at the eastern end of Presque Isle State Park, and it marks the entrance to Presque Isle Bay.

The North Pier Lighthouse went into service in 1858, and it replaced a wooden lighthouse destroyed by a collision with a ship the prior year.

At 34 feet tall, the North Pier Lighthouse is the shortest of the three Erie lighthouses.

To reach the North Pier Lighthouse, park in the lot at GPS coordinates 42.154999, -80.073590, at the end of East Fisher Drive at Presque Isle State Park, then walk approximately 1,000 feet out the concrete pier to the lighthouse.

The Erie Land Lighthouse, as the name implies, is located on the Erie waterfront, rather than on Presque Isle as the other two Erie lighthouses are.

The Erie Land Lighthouse is now open to the public for tours every Saturday, Sunday, and first Tuesday of the month from 11 a.m until 3 p.m.. The grounds are accessible for visits daily.

Exploring Presque Isle State Park in Erie will show you 10 of the best things to do at the most-visited state park in PA!

Taking the Lady Kate Boat Tour at Presque Isle State Park is yet another way you can see all three lighthouses in Erie, but this time from a mariner’s perspective!

While it serves no navigational purposes, the Sherman Memorial Lighthouse in Forest County is the tallest functional lighthouse in Pennsylvania.

Standing 75 feet tall along the banks of the Allegheny River in Tionesta, the Sherman Memorial Lighthouse (and surrounding Peace Park) is one of the best roadside attractions in northwestern Pennsylvania!