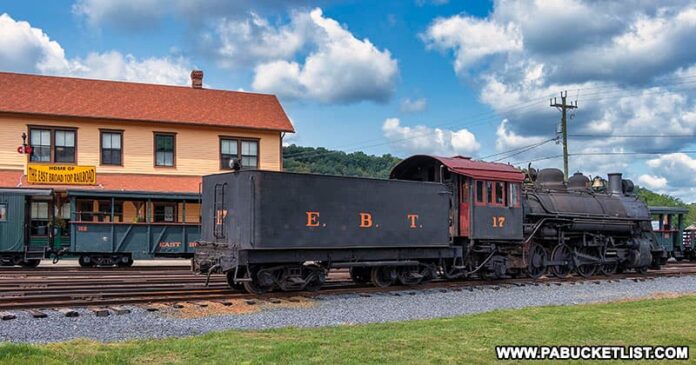 The East Broad Top Railroad is back!

After a decade-long hiatus, the East Broad Top Railroad is once again offering passenger excursions, shop tours, and visits to the “roundhouse” where their fleet of six steam engines live.

And now that the wheels are turning once again, here’s what you can expect to see and experience in this sprawling “living history museum” in Huntingdon County.

We’ll start with what you’re probably most excited about – the chance to ride the rails again!

In 2021, the East Broad Top Railroad is using one of their diesel engines to pull passenger cars on sightseeing excursions, with plans to have at least one of their steam locomotives ready to go for the 2022 season.

The sightseeing trip I took in September of 2021 utilized open-air passenger cars, which allow for beautiful, unobstructed views of the Huntingdon County countryside.

The train travelled north out of Orbisonia on a 6 mile out-and-back trip, lasting approximately 45 minutes.

The attendants were dressed in period garb, which adds to the late-1800s vibe.

Of course that vibe will be further enhanced when the first steam engine is up and running again!

But in the meantime, the diesel-powered trip was great, and I’m sure no railfan will be disappointed by the experience.

You can buy tickets in-person at the train station in Rockhill Furnace, or book online at the East Broad Top Railroad’s official website.

Maintaining and repairing the locomotives and train cars was the task of the machine shops at the East Broad Top Railroad.

Guided tours of those shops are now offered, giving you the chance to see them in much the same state that they were in more than 100 years ago.

Machine Shop tours start in the old freight office, which is itself a repository of many historical artifacts related to the railroad.

As you make your way across the tracks from the freight office to the machine shops, note the difference between the narrow gauge and standard gauge tracks.

Like the locomotives, the tools in the machine shop were steam powered, via an elaborate system of belts and shafts.

The machinists who worked here did everything from small repairs to fabricating entire freight cars.

Pieces and parts of railcars can be found stored all around the machine shops; some of these parts may not have moved in more than half a century.

Included in the machine shop tour is a tour of the roundhouse, parts of which date back to 1874.

The roundhouse is where the locomotives were prepared for use, and stored when not in use.

The roundhouse is also where minor repairs and inspections were performed on the locomotives.

Currently, the roundhouse is where the steam locomotives are being prepared for service once again.

As with the train excursions, you can book machine shop tours online, or buy them in person at the train station, which conveniently also houses the gift shop!

In other words, 13 miles north of the Fort Littleton exit of the PA Turnpike, or 11 miles south of Mount Union, just off Route 522.

Be sure to check the East Broad Top Railroad official website for the latest tours, special events, hours, and admission prices; when I visited recently an antique machinery show was taking place, and several more special events are planned throughout the year.

The Rockhill Trolley Museum is literally right next to the East Broad Top Railroad, and gives visitors a chance to ride antique electric streetcars through the Huntingdon County countryside.

The 1000 Steps in Huntingdon County is one of the most famous (and challenging) hikes in central Pennsylvania!

The Allegheny Tunnel (known originally as the Summit Tunnel) in Gallitzin (Cambria County) was the longest railroad tunnel in the world at the time of its completion, at 3,612 feet.

Completed in 1854, the Allegheny Tunnel is still in use to this day, and the Gallitzin Tunnels Park next to it is a popular spot for railfans to congregate and watch trains enter and exit this historic tunnel.

In conjunction with the Allegheny Tunnel mentioned above, the Horseshoe Curve allowed trains to cross back and forth over the steep Allegheny Mountains, something that had been impossible before 1854.

Riding the Lehigh Gorge Scenic Railway in Jim Thorpe is another fabulous Pennsylvania sightseeing train excursion you can take.