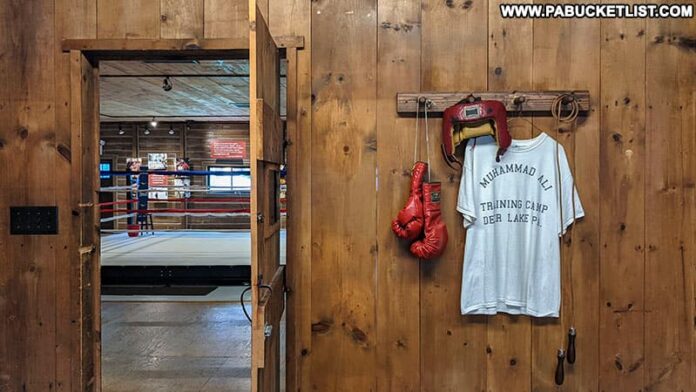 Would it surprise you to learn that Muhammad Ali, perhaps the greatest boxer of all time, prepared for some of his biggest fights at a training camp he built in rural Pennsylvania?

Muhammad Ali was introduced to Pennsylvania coal country by Gene Kilroy, a member of his entourage, former PR executive with the Philadelphia Eagles, and Schuylkill County native.

Ali initially trained at an outdoor boxing ring on a mink farm in Deer Lake, owned by furrier and boxing enthusiast Bernie Pollack.

Not content to have his training sessions interrupted by inclement weather, Ali purchased a nearby six-acre wooded plot of land from Pollack in the spring of 1972, in order to build an indoor training camp.

Muhammad Ali personally laid out the design of what he nicknamed “Fighter’s Heaven”, and the training camp he built eventually grew into a small village of 18 buildings, including a gym, a kitchen/dining hall, a mosque, and cabins for himself, his sparring partners, and his staff and guests.

Muhammad Ali trained at Fighter’s Heaven until his last fight in 1981, after which Fighter’s Heaven eventually changed hands, fell into disrepair, and went back up for sale around the time of Ali’s death in 2016.

It was immediately after Ali’s death that Mike Madden – boxing fan, real estate developer, and son of NFL Hall of Famer John Madden – learned that the property was on the market and proceeded to purchase it.

Mike has put an enormous amount of time, money, and sweat equity into restoring Fighter’s Heaven to its former glory, working with one-time Ali associates to try and authentically recreate the camp in a manner similar to how it was in Muhammad Ali’s heyday.

Where exactly is Fighter’s Heaven located? 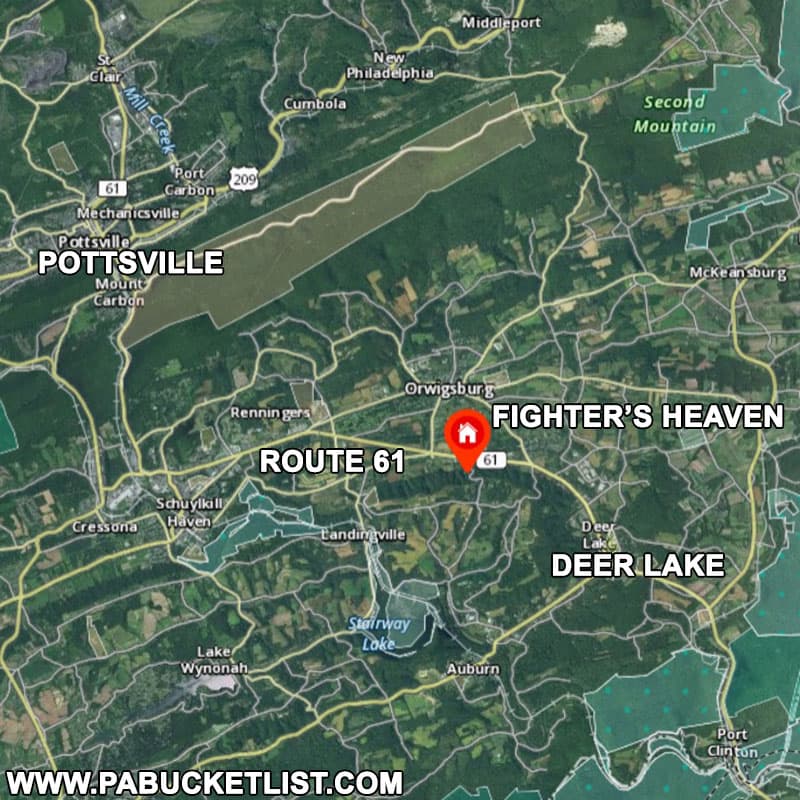 When is Fighter’s Heaven open to visitors?

Monday-Friday by appointment year-round
Saturday & Sunday 10:00am-5:00pm from May through October 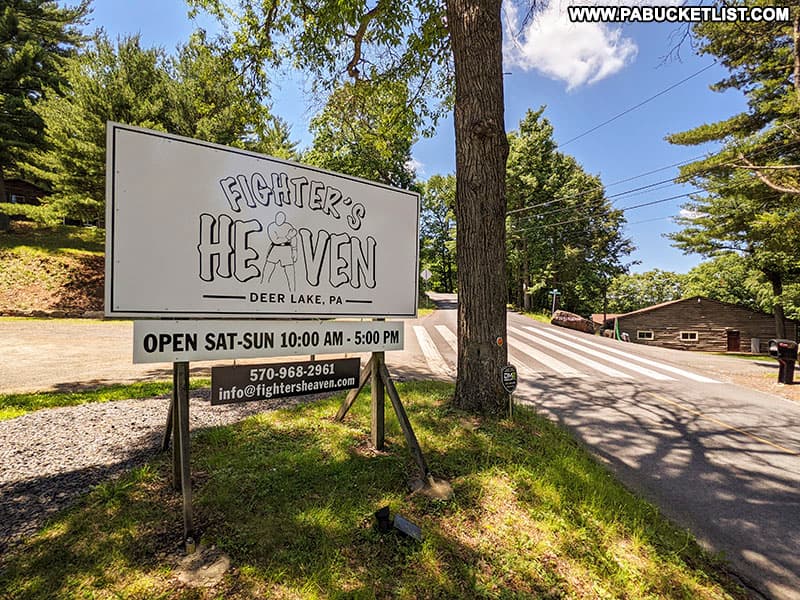 What is the admission price at Fighter’s Heaven?

Admission is free, but donations are appreciated, all of which go to several partner charities including The Michael J. Fox Foundation for Parkinson’s Research,The Muhammad Ali Center, and Avenues. 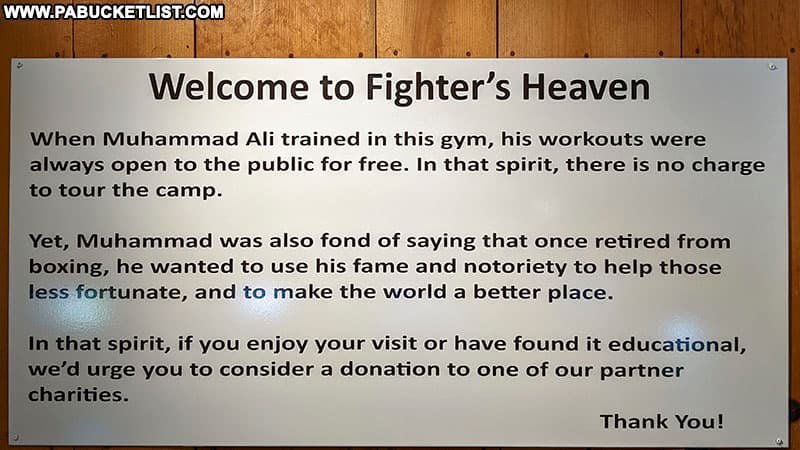 Why did Muhammad Ali want to train for his fights in rural Pennsylvania?

To escape the distractions of big-city gyms. He found the fresh air and wide-open spaces reinvigorating and loved spending time at Fighter’s Heaven. 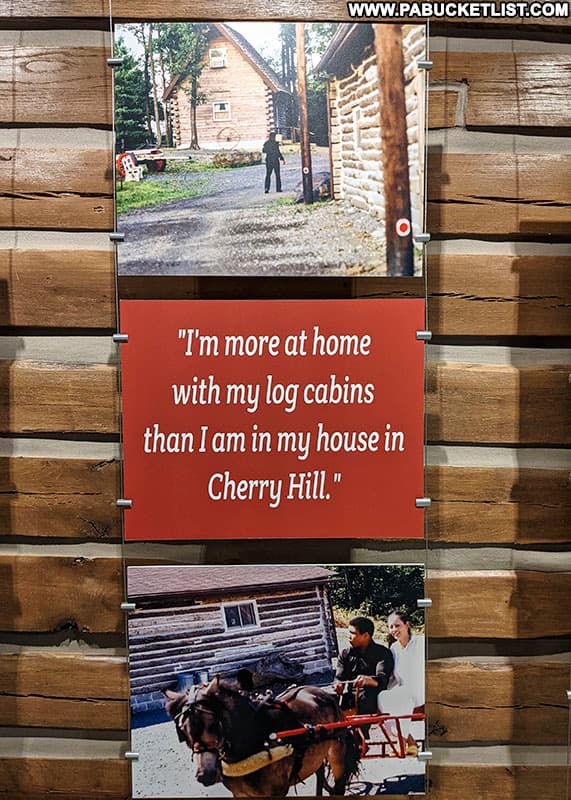 Where did Muhammad Ali sleep at Fighter’s Heaven?

Ali slept in a spartan, one-room cabin with no electricity and a hand-pump for running water.
His wife and children stayed in a separate chalet at Fighter’s Heaven. 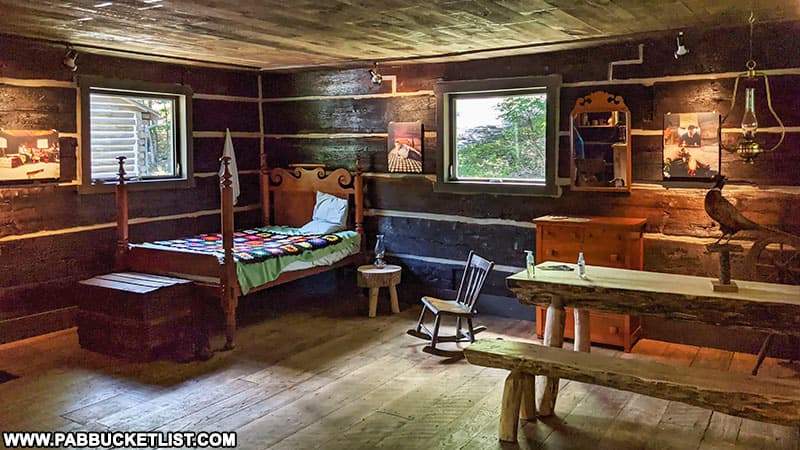 Where did Muhammad Ali eat at Fighter’s Heaven?

Ali built a large kitchen/dining hall where he and his entourage ate. 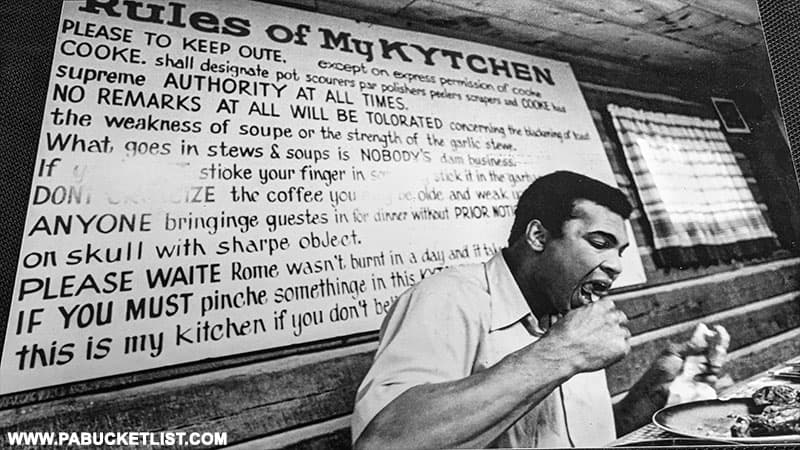 Where did Muhammad Ali train at Fighter’s Heaven?

Ali built a gym with a boxing ring next to the dining hall. He also did his “road work” / endurance runs along local roads and chopped down trees with an axe to build strength and stamina. 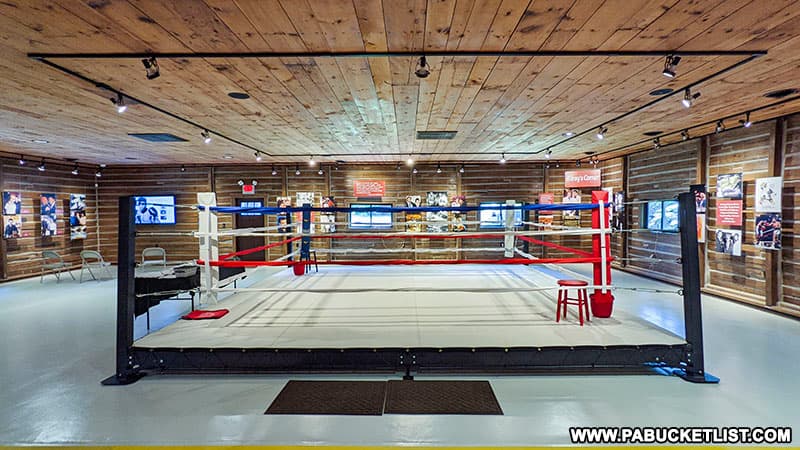 Where did Muhammad Ali pray at Fighter’s Heaven?

Ali, who joined the Nation of Islam in 1964, prayed at a mosque he had built on-site at Fighter’s Heaven. 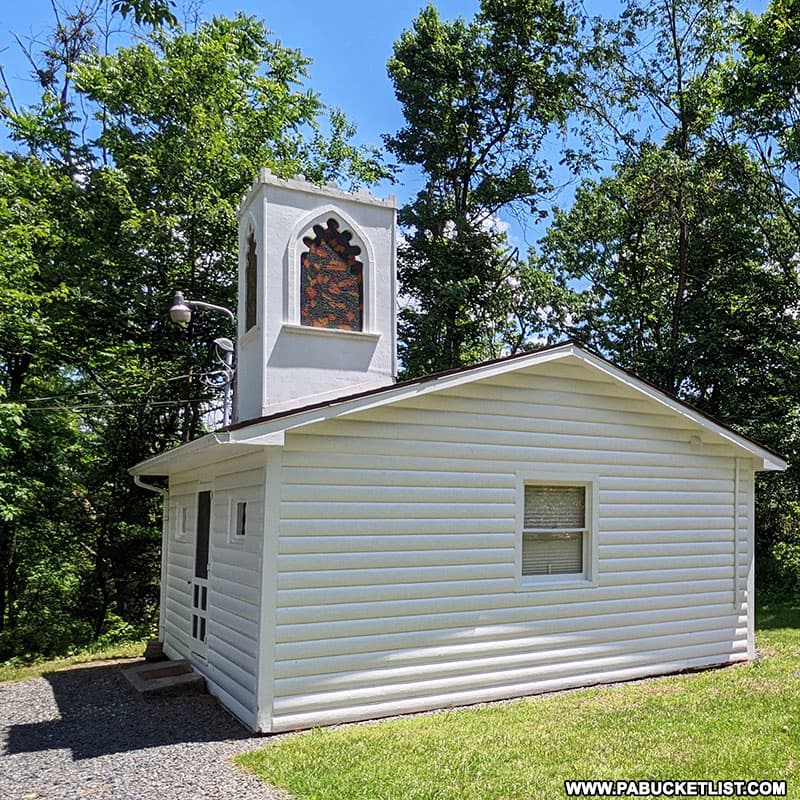 Of all the structures at Fighter’s Heaven that have been rehabilitated under Mike Madden’s ownership, perhaps none is more interesting that Muhammad Ali’s personal cabin.

While this rustic, one-room cabin would seem right at home on the frontier of 18th century Pennsylvania, it seems almost implausible that the most famous person in the world at that time chose to live in this humble abode while training for the biggest fights of his illustrious career.

With oil lamps and a fireplace for light, and a coal stove for heat, Muhammad Ali found physical and mental focus living in this manner.

Today, visitors to Fighter’s Heaven can channel some of the Ali magic by recreating scenes captured during the Champ’s time here in Deer Lake.

Many of the furnishings of Ali’s cabin have been faithfully reproduced from photos and videos taken over the years he trained at Fighter’s Heaven.

Even small details such as the heavy boots Ali wore while doing his endurance runs are present near the foot of his bed.

Photos on the walls and a video of a tour Muhammad Ali gave to TV host Dick Cavett add to your sense of connection to the past as you explore the cabin.

The Gym at Fighter’s Heaven

The gym at Fighter’s Heaven is another highlight of the grounds. At the heart of gym, appropriately enough, is the boxing ring.

The walls of the gym surrounding the ring are decorated with photos and posters highlighting Ali’s career.

There are also displays of Muhammad Ali’s quotes – some famous, others more subtle but no-less insightful.

An attached rubdown room is where Ali would go post-workout.

The couch and telephone in the rubdown room offers yet another amazing chance to recreate history!

The Kitchen at Fighter’s Heaven

No heavyweight fighter becomes a three-time world champion without a good kitchen staff, and Muhammad Ali had both his Aunt Coretta and Lana Shabazz to thank for preparing meals for him, his staff, and guests at Fighter’s Heaven.

The original kitchen stove and dining table are still there, as well as some of Lana Shabazz’s handwritten recipes.

The opportunity to sit at Muhammad Ali’s original kitchen table at Fighter’s Heaven is simply too good of a photo op to pass up!

Other Buildings at Fighter’s Heaven

The chalet was where his wife and children stayed, and the stable was for the horses at Fighter’s Heaven.

As mentioned previously, Ali built a mosque to pray in.

Next to the mosque were several cabins for staff and visitors.

Muhammad Ali maintained an open-door policy at his training camp, so anyone from local fans to international celebrities were liable to show up at Fighter’s Heaven.

Something that grabs your attention immediately as you arrive at Fighter’s Heaven are a number of large boulders emblazoned with the names of famous boxing personalities.

Muhammad Ali had a number of large boulders brought in to Fighter’s Heaven, which his father (a sign painter by trade) then painted with the names of some of Ali’s former opponents, boxing idols, and trainers.

Since Fighter’s Heaven has reopened to the public as a museum of sorts, images of the persons named on the boulders have been added to the mix, to put faces to the names, as it were.

Here Ali, along with camp staff and visitors, would gather around a roaring fire under the starry Pennsylvania night skies to enjoy one another’s company.

In a state not unfamiliar with Revolutionaries, Muhammad Ali was and still is one of the most famous “revolutionaries” in American history.

And while the Revolutionaries of the 1770’s were fighting for independence from England, Muhammad Ali put his career, his reputation, and his personal freedom on the line 200 years later to fight for his ideals regarding racial justice and America’s involvement in Vietnam.

The fact that he chose rural Schuylkill County as the place where he would refine not just his body, but his mind and ideas about life as well, should be a source of pride for all Pennsylvanians.

Muhammad Ali’s list of accomplishments as a fighter, a philanthropist, and a humanitarian has filled volumes of books, and the chance to literally walk in the footsteps of such a legendary figure and experience the environment that helped shape his life is a fortuitous opportunity not to be missed!

To arrange for your own visit to Fighter’s Heaven, or to inquire about holding a corporate retreat or private event there, use this contact form on their official website.

The Yuengling Brewery is located 6 miles north of Fighter’s Heaven, in Pottsville.

Yuengling is America’s oldest brewery, and offers free tours with free beer samples (to those 21 and older) at the end of the tour!

Jerry’s Classic Cars and Collectibles Museum is a two-story, floor-to-ceiling display of vintage cars and pop culture memorabilia, housed in a historic garage.

With over 20,000 collectibles on display, as well as dozens of rare automobiles, Jerry’s Museum is well worth a few hours of your time when visiting the Pottsville area.