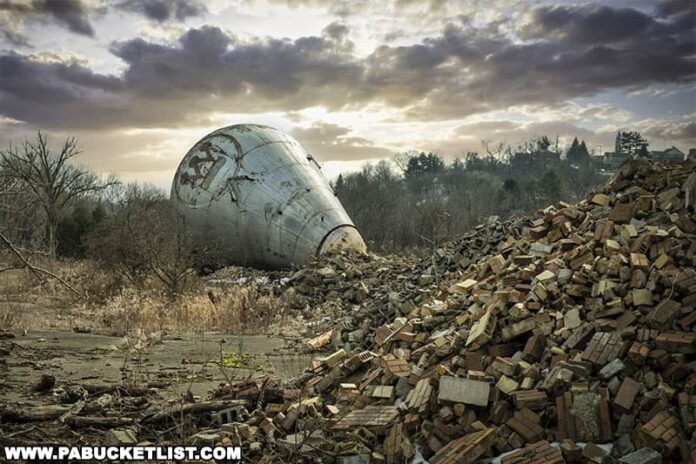 The abandoned Westinghouse Atom Smasher is an iconic relic from the dawn of the atomic age in the United States.

For almost 80 years, the Westinghouse Atom Smasher was a landmark in Forest Hills, a suburb of Pittsburgh roughly 10 miles east of downtown.

It was on this very site that many of the technologies we take for granted today were first developed, and certainly knowing a bit of the backstory makes visiting the abandoned atom smasher all the more interesting.

History of the Westinghouse Atom Smasher

The Westinghouse Research Laboratories, started in 1916, initially developed materials and technology related to the generation and transmission of electricity.

In 1937, Westinghouse physicists designed a 5-million volt Van de Graaff generator, then the largest of its type in the world, to create nuclear reactions by bombarding target atoms with a beam of high-energy particles.

According to the Institute of Electrical and Electronics Engineers, the Westinghouse Atom Smasher “made possible precise measurements of nuclear reactions and provided valuable research experience for the company’s pioneering work in nuclear power.“

The atom smasher remained in operation until 1958, and in 1987 Westinghouse shut down the Forest Hills Labs completely.

Now all that remains of the Westinghouse Research Labs are piles of rubble and the enduring “giant light bulb” resting on its side.

Despite periodic talks about preserving the Westinghouse Atom Smasher in a park or museum, as of this writing (February 2022), it remains on its side, exposed to the elements, a fallen symbol of a bygone era.

How to Find the Abandoned Westinghouse Atom Smasher

The front gates of the former Westinghouse Research Labs are located at GPS coordinates 40.410462, -79.842302, approximately 10 miles east of downtown Pittsburgh.

The street address for the front gate of the former Westinghouse Research Lab is 105 West St, East Pittsburgh, PA 15112 (directly across the street from Tugboat’s restaurant).

Please note that the atom smasher sits on private property – do not trespass!

You can easily get excellent photos of it from outside the fence which surrounds the property.

The street closest to the atom smasher, Service Road Number 1, is a one-way street and you CANNOT park along it, but there is plenty of free street parking on nearby streets.

That such an iconic historic engineering landmark should be rusting away on a concrete slab seems to be a sign of the “disposable” times we live in.

I’d like to think with so many museums in Pittsburgh, like the Carnegie Science Center or the Heinz History Center, some sort of deal could be worked out to preserve the Westinghouse Atom Smasher.

But in case that doesn’t happen, you may want to visit the abandoned Westinghouse Atom Smasher near Pittsburgh sooner rather than later!

28 Abandoned Places in PA You Can Legally Explore is your guide to the best old, abandoned, and obsolete attractions in Pennsylvania!

Whether it was due to natural disasters, technological shifts, or just structural obsolescence, you’ll find the stories behind these abandoned destinations as interesting as they are haunting!

Fall Run Falls in Allegheny County has the distinction of being the largest waterfall near downtown Pittsburgh!

Playthings Etc. is a stealth bomber-shaped toy store along Route 8 in Butler County, billed by the owners as “The World’s Coolest Toy Store”!