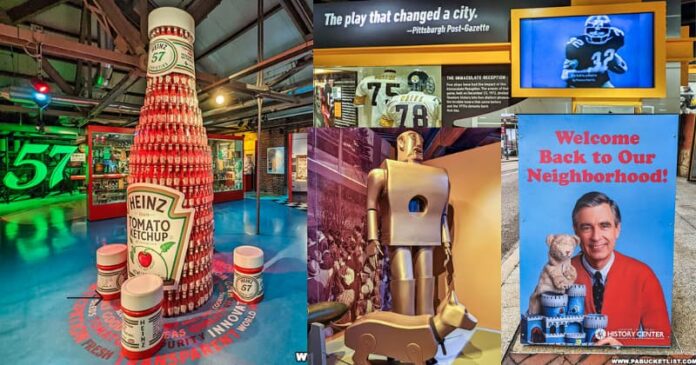 The museum is named after the late U.S. Senator H. John Heinz III, great-grandson of the founder of the H. J. Heinz Company.

Exhibits at the Heinz History Center

With six floors and 275,000-square-feet of exhibit space, there is SO much to see at the Heinz History Center, it’s almost overwhelming.

I’m sure you’ve heard the old cliche “you need a whole day to see it all”, and that certainly is the case at the Heinz History Center.

So I’m going to share with you some of my favorite exhibits from my most recent visit to the Heinz History Center, but keep in mind there are MANY more things to see and do there.

While it was officially taken out of service in 1988, visitors can still board and explore Pittsburgh streetcar #1724 in the Great Hall.

Pittsburgh: A Tradition of Innovation

This exhibit on the second floor celebrate 250 years of Pittsburgh innovations.

For example, Elektro and Sparko were built by Pittsburgh’s Westinghouse Electric Company for the 1939 World’s Fair.

More eclectic Pittsburgh cultural contributions like “Night of the Living Dead” are featured here as well.

The Heinz exhibit on the fourth floor is the largest collection of Heinz company artifacts in the world.

The Heinz exhibit explores the important history behind Henry John Heinz’s entrepreneurial spirit and how he shaped the global corporation that continues to bear his name today.

One of the highlights of the Heinz exhibit is an 11-foot tall ketchup bottle, comprised of more than 400 individual bottles.

The Mister Rogers’ Neighborhood exhibit features artifacts from the popular children’s show that was filmed at WQED in Pittsburgh.

In fact, this is the largest collection of original items from the “Mister Rogers’ Neighborhood” television set on public view anywhere in the world.

From Slavery to Freedom

The From Slavery to Freedom exhibit on the fourth floor explores more than 250 years of African American history in Pittsburgh and western PA.

Pittsburgh’s role in the Underground Railroad and the modern quest for civil rights are among some of the subjects covered in this exhibit.

Naturally, there are exhibits featuring the Steelers…

Other sports with western PA ties like Indy car racing are represented as well.

Like any great museum, the Heinz History Center has an excellent gift shop, featuring many of the iconic brands you’d associate with Pittsburgh.

From Iron City to Mister Rogers, you’re sure to find a memorable souvenir in the Heinz History Center gift shop.

As I mentioned earlier, you could literally spend an entire day at the Heinz History Center and still not be able to take it all in.

Celebrating everything from the diverse ethnic neighborhoods of Pittsburgh…

to the diehard sports fans of western PA.

There’s an amazing array of things to see, do, and learn at the Heinz History Museum in Pittsburgh!

The abandoned Westinghouse Atom Smasher near Pittsburgh is an iconic relic from the dawn of the atomic age in the United States.

While I’d like to think that an artifact like this would find its way to the Heinz History Center or somewhere similar, right now the Westinghouse Atom Smasher sits on a vacant lot 10 miles east of downtown Pittsburgh.

The State Museum of Pennsylvania in Harrisburg preserves the natural and man-made history of the Keystone State, from prehistoric times to the present day.