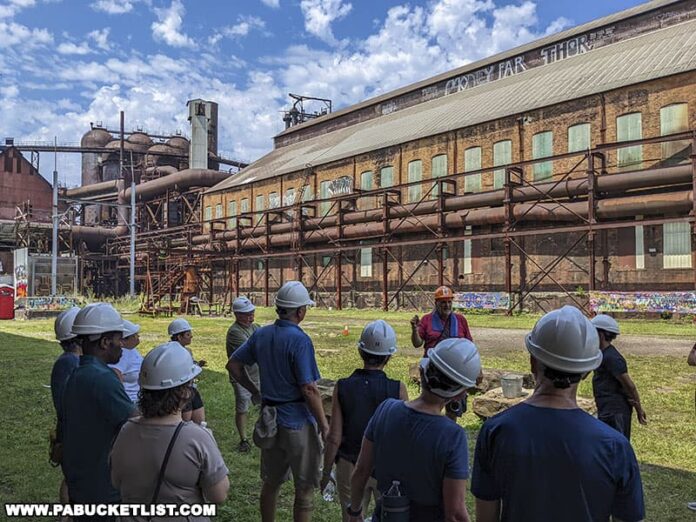 When the furnaces were closed in 1982, large swaths of the site met the wrecking ball.

In 1988, a coalition of local citizens got together to try and preserve not only the remaining furnaces, but the local culture they represented.

As a result, in 1996 the Rivers of Steel National Heritage Area was created by an act of Congress and the Commonwealth of Pennsylvania.

Today the Rivers of Steel nonprofit group puts on tours, workshops, exhibitions, and festivals at the Carrie Blast Furnaces, to promote tourism and economic development in the region, as well as preserving the site itself.

History of the Carrie Blast Furnaces

In the simplest of terms, the Carrie Blast Furnaces turned raw iron ore into purified, molten iron which could then be used in the steel-making process at the Homestead steel mills on the opposite side of the Monongahela River.

When I recently took the 2 hour “industrial tour” of the site, tour guide Adam did a superb job of explaining the processes that went on here.

Many of the raw materials used in these processes arrived by rail, and the remnants of this rail infrastructure are included on the tour.

The two remaining blast furnaces (there were once seven of them) are MASSIVE, and standing at the base of them gives you a great sense of perspective.

It was in these furnaces that iron ore was superheated into its molten state.

The molten iron was then poured into special rail cars known as “torpedo cars”, owing to their unique shape.

The torpedo cars were lined with refractory bricks (bricks that can withstand high temperatures) that would keep the iron in its molten state while it was transported across the nearby “hot metal bridge” to the steel mills on the opposite side of the Monongahela River.

This was hot, dangerous, back-breaking work, and these historic furnaces played a critical role in Pittsburgh’s rise to dominance in 20th century steel production.

One thing you’ll notice when touring the grounds of the Carrie Blast Furnaces is a myriad of colorful murals.

Taking a “if you can’t beat ’em, join ’em” approach, the Rivers of Steel has partnered with local and international graffiti artists and muralists to create some truly incredible artwork around the site.

An entire wall towards the back of the property is devoted to murals, and these works of art are a far cry from the amateurish graffiti you find at many abandoned or formerly-abandoned sites.

One piece of “guerilla art” at the Carrie Blast Furnaces that has achieved international fame is the Carrie Deer.

The Carrie Deer was built in 1997 by several local artists who would sneak onto the abandoned property on Sundays, when no demolition/salvage workers were around.

A number of tours and workshops are offered at the Carrie Blast Furnaces, and you can learn more about them and schedule a visit at the Rivers of Steel OFFICIAL WEBSITE.

There’s even a gift shop for the all-important Carrie Furnace swag.

I can’t say enough good things about this tour – every person I dealt with at Rivers of Steel was very friendly, extremely knowledgeable, and obviously passionate about the mission of preserving and promoting both the legacy of the site and the heritage of the “Steel City”.

Whether you’re a history buff, urbex fan, or photographer – exploring the Carrie Blast Furnaces in Pittsburgh is a wonderful experience, verging on sensory overload!

The abandoned Westinghouse Atom Smasher is an iconic relic from the dawn of the atomic age in the United States.

For almost 80 years, the Westinghouse Atom Smasher was a landmark in Forest Hills, a suburb of Pittsburgh roughly 10 miles east of downtown.

Fall Run Falls in Allegheny County has the distinction of being the largest waterfall near downtown Pittsburgh!

The 1000 Steps in Huntingdon County were the daily commute for men working the ganister quarry at the top of Jacks Mountain.

The ganister, technically called Tuscarora quartzite (a type of sandstone), was used to manufacture heat-resistant refractory bricks in nearby Mount Union, the same bricks used to line the furnaces and “torpedo cars” at the Carrie Blast Furnaces.

The abandoned lime kilns at Canoe Creek State Park are remnants of a thriving limestone-processing facility that once operated around the clock in this now-tranquil corner of Blair County.

The steel mills of Pittsburgh had an immense need for lime, used to remove impurities from molten iron at blast furnaces like the Carrie Furnaces, so lime from these kilns was shipped by rail to Pittsburgh for that purpose.

In the early days of the steel industry in Pennsylvania, raw iron ore was shipped by rail to the blast furnaces in Pittsburgh from mining boomtowns like the now-abandoned ghost town of Scotia near State College.

Today, just scattered remains (and a reported ghost!) dot the landscape of this once-thriving iron mining operation, founded by Andrew Carnegie in the late 1800s.