The 1000 Steps along the Standing Stone Trail is one of the most famous hikes in Huntingdon County!

The reasons for its fame are many – the challenging nature of the hike, the ease with which you can get to the trail head, and the incredible views from the top of the steps.

Follow along as I share with you all the info you’ll need to find and explore the 1000 Steps in Huntingdon County!

The 1000 Steps are located along the Standing Stone Trail in Huntingdon County, between Mapleton and Mount Union. 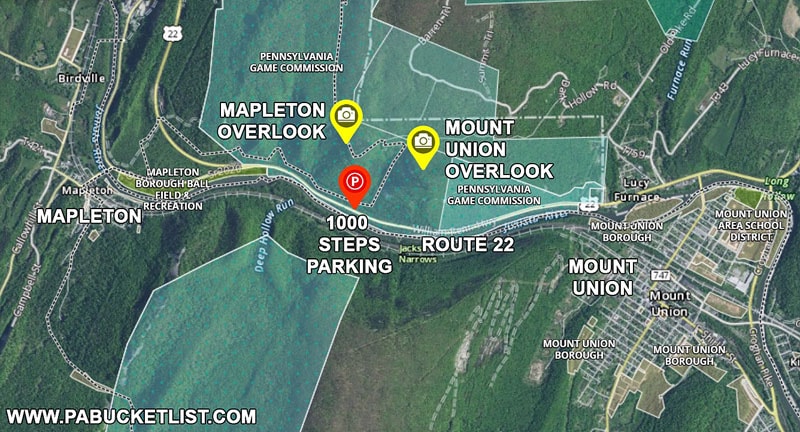 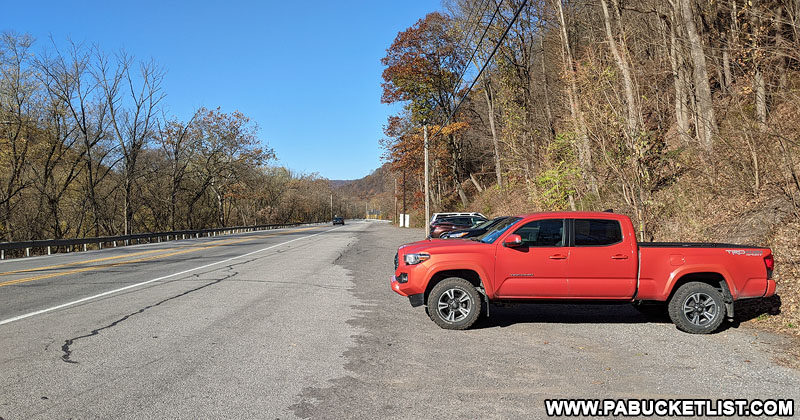 The hike covers approximately 850 feet of elevation change over the course of 0.5 miles. 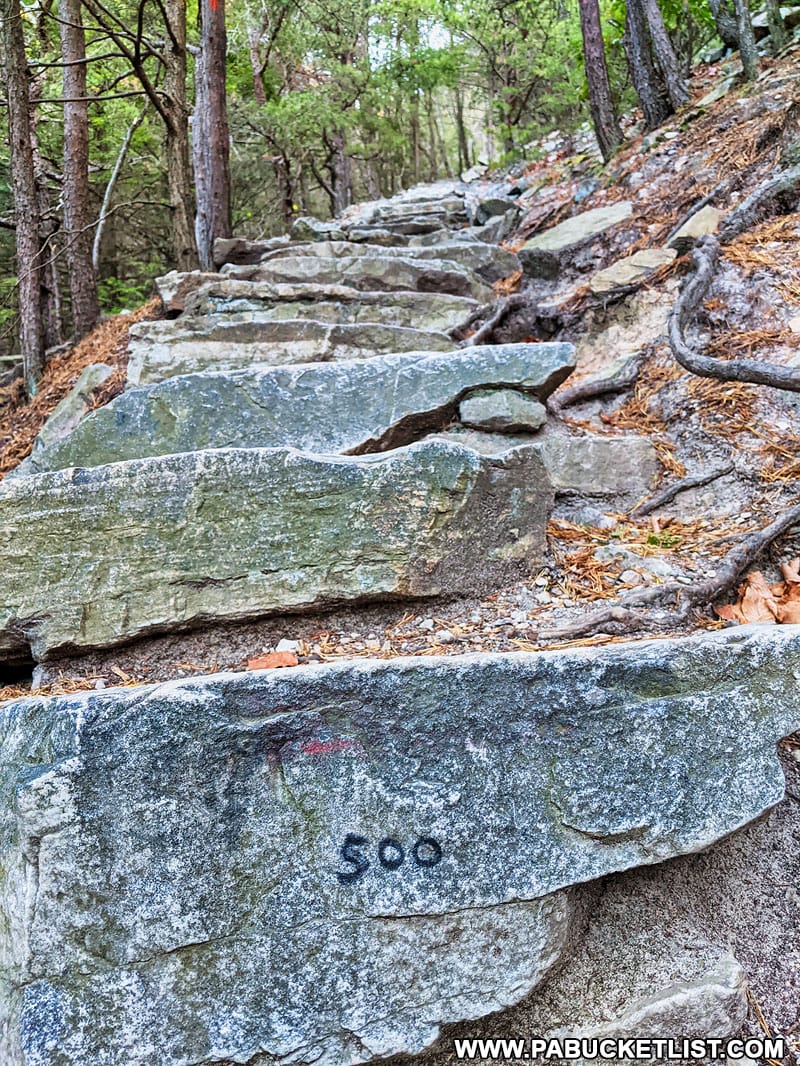 Technically there are 1,037 steps – so all that and then some! 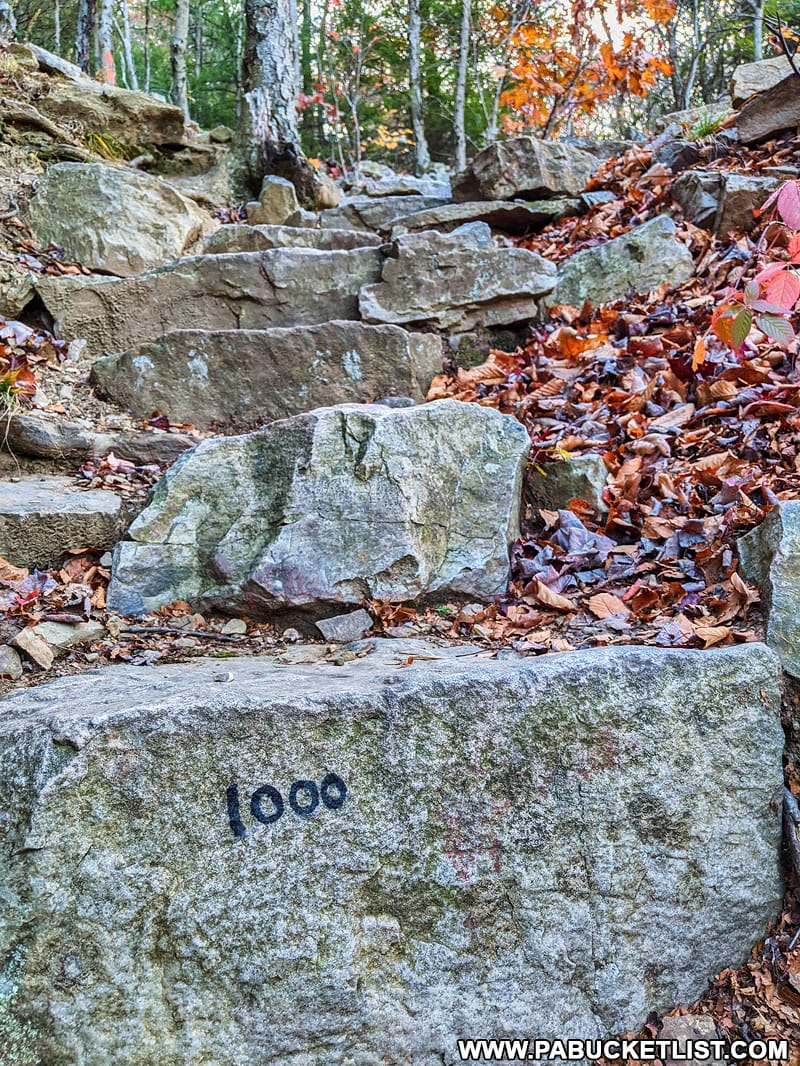 An old stone quarry, the ruins of a train shed, and some fantastic scenic overlooks. 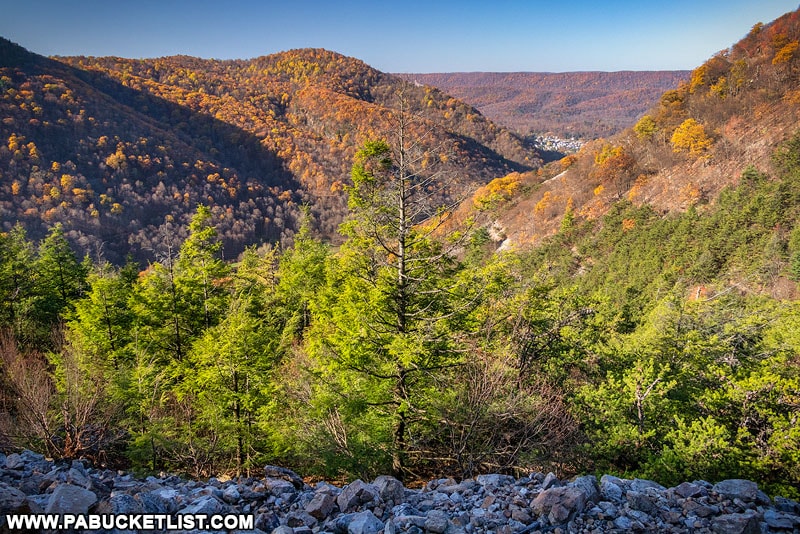 So that men who worked in the Ledge Quarry at the top of the mountain could get to and from their jobsite every day. 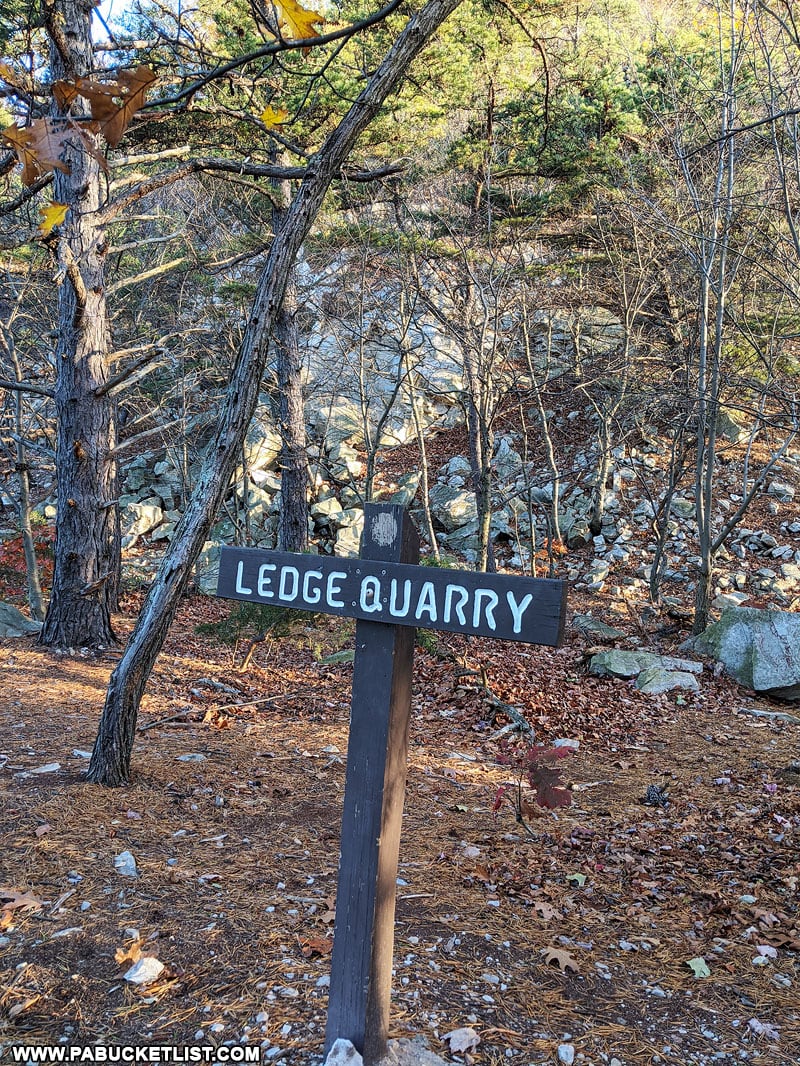 You can, but it is certainly more challenging and should be attempted with an abundance of caution. 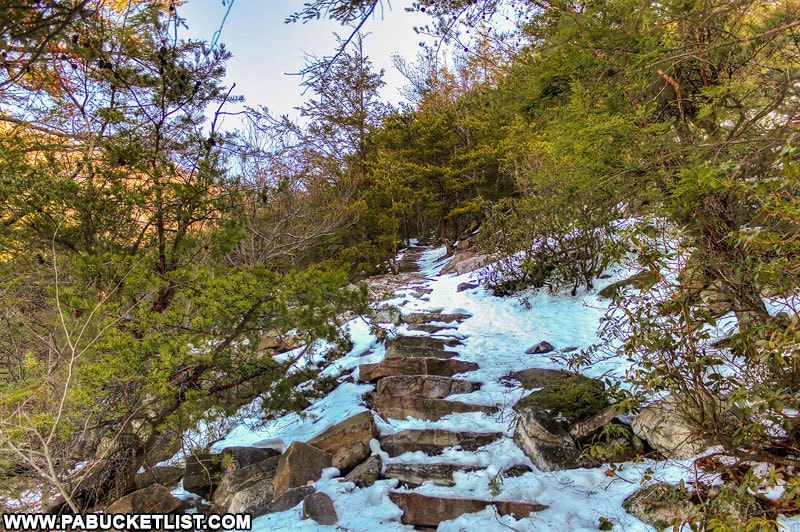 Who owns the land on which the 1000 Steps are located? 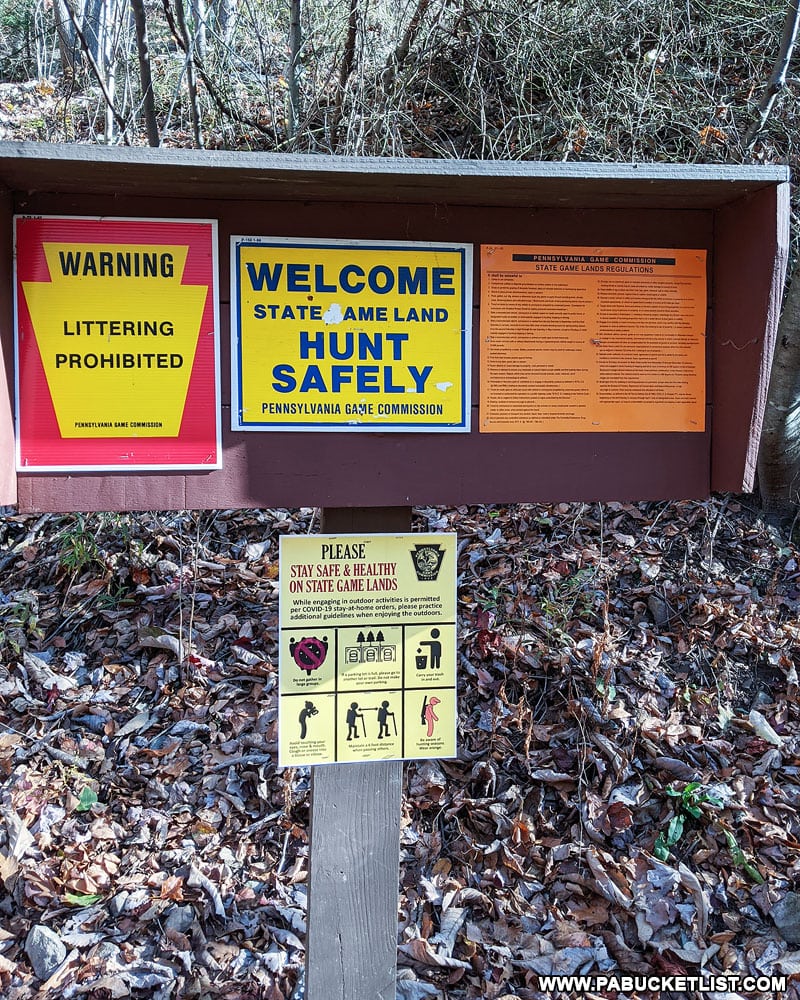 Brief History of the 1000 Steps

Now part of state game lands and used as a recreational site, the 1000 Steps were the daily commute for men working the ganister quarry at the top of Jacks Mountain.

The ganister, technically called Tuscarora quartzite (a type of sandstone), was used to manufacture silica bricks in nearby Mount Union.

The silica bricks were highly heat-resistant and an important part of factory construction for manufacturers of steel, iron, and glass.

The ganister was transported from the quarry to brick factories via a network of narrow-gauge trains (referred to as “dinkey trains”) and cable-operated inclined planes.

When the Great Flood of 1936 (sometimes called the St. Patrick’s Day Flood) wiped out the “dinkey bridge” over the Juniata River between Jacks Mountain and Mount Union, output at the brick factory and quarry slowed while the bridge was being repaired.

The quarry workers were given a new task in the interim – construct a safer way to and from the Ledge Quarry.

Due to safety rules, miners were not allowed to ride the dinkey train or rail cars to and from the quarry.

Instead, workers hiked up rail grades or worn footpaths to the top of the mountain each day.

The 1000 Steps was the new and improved path they constructed, and thanks to their laborious effort, we have this unique and wonderful section of the Standing Stone Trail to enjoy today.

As mentioned at the outset, the 1000 Steps portion of the Standing Stone Trail is roughly a half-mile long, with approximately 850 feet of elevation gain covered in that half-mile.

How long it takes you to cover that distance is entirely up to you, and there are spots along the way up/down where the steps meet up with old railroad/inclined plane grades, which make ideal resting places.

Once you reach the top of the 1000 Steps, you can either continue to follow the orange-blazed Standing Stone Trail to the west (S.S.T. North), or follow a blue-blazed trail to the east (leads to a view of Mount Union in 0.3 miles).

For the purposes of this write-up, I’m going to describe the hike to the left first, but it really makes no difference in what order you do them.

Located a mere 0.2 miles to the west of the 1000 Steps, the Dinkey Shed was built in 1938 as a maintenance facility for the dinkey trains that pulled rail cars of ganister from the Ledge Quarry.

The dinkey shed had a mechanic’s pit (now filled in) where the trains could be serviced from underneath.

The dinkey shed was in use until the Ledge Quarry closed in 1952, at which time the equipment was removed, leaving only the shell of the building.

The Standing Stone Trail continues up around the back of the dinkey shed, and a signpost at the back right corner directs you to the Mapleton Overlook 0.5 miles further northwest.

The Mapleton Overlook offers an expansive view out over Mapleton, the Juniata River, and Routes 22 and 655.

Many workers at the brick factories and quarries lived in Mapleton, and even today trains pass through, although they are no longer carrying ganister.

A rail from the old train tracks marks the front edge of the Mapleton Overlook, a nod to its past.

Behind the Mapleton Overlook are the remains of the Ledge Quarry.

The Standing Stone Trail continues north past Mapleton Overlook, but for the purposes of this article I’ll assume this is an out-and-back day hike for you.

If that’s the case, turn around and back-track 0.7 miles along the SST, past the Dinkey Shed, to the top of the 1000 Steps, following the orange blazes as you go.

From the top of the 1000 Steps, follow a blue-blazed trail east 0.3 miles to the Mount Union Overlook.

Along the way to the Mount Union Overlook, you’ll pass many excellent views.

When you reach the Mount Union Overlook, you’ll be standing at the top of what was called Little Incline, one of the inclined planes used to transport rail cars full of ganister down the mountain and empty rail cars back up.

From here you can simply backtrack to the top of the 1000 Steps and then descend the trail to Route 22 where you parked, covering roughly 3 miles of total distance if you hiked to the sites described here in the manner I suggested.

Hiking the 1000 Steps in the Winter

A few words about hiking the 1000 Steps in the winter.

Can it be done? Sure.

But I’d recommend, at a minimum, you use a hiking stick and some form of microspikes to aid you in your quest.

If you aren’t experienced in this type of winter hiking, I WOULD NOT recommend that you try this at all, regardless of equipment.

That said, if you are an experienced winter hiker, the views from the top of the 1000 Steps are outstanding with a fresh blanket of snow!

To the west, Mapleton takes on the look of an Alpine village.

To the east, Little Incline and Mount Union stand out even more with snow highlighting the contours in the terrain.

Final Thoughts on the 1000 Steps

There is really no bad time of year to hike the 1000 Steps in Huntingdon County.

The spectacular views and the historical nature of the trail and area around it make it an incredibly popular hike, more than 80 years after the steps were first constructed.

And there is certainly a sense of accomplishment in completing such a physically demanding hike.

Just remember as you huff and puff your way to the top – the workers in the quarry did this every morning on their way to a long day of busting rocks and loading them onto railcars!

“The 12 Best Scenic Overlooks in Huntingdon County” will introduce you to even more excellent scenic vistas in the area.

The Stone Mountain Hawk Watch is a scenic overlook in the Rothrock State Forest used to monitor the fall hawk migration.

Exploring Rainbow Falls at Trough Creek State Park will show you how to find what is arguably the prettiest waterfall in Huntingdon County.

The 17 Best Things to Do in Huntingdon County PA will introduce you to even more recreational opportunities in the area.