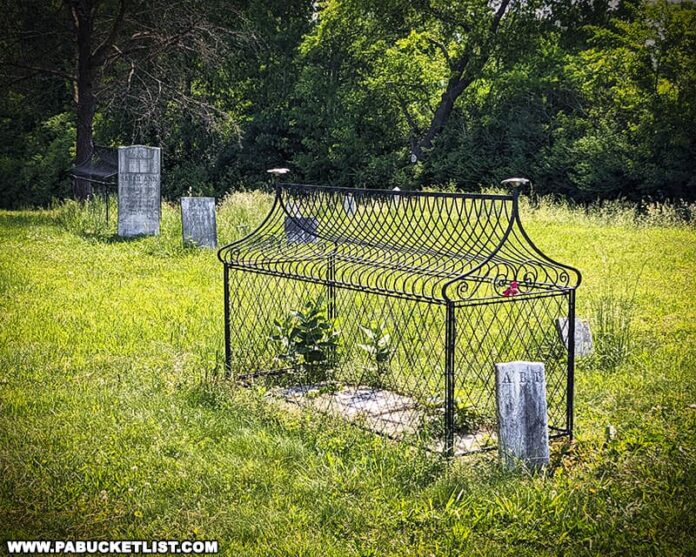 The Hooded Grave Cemetery in Columbia County is home to what may be the only two hooded graves that exist in the United States.

Sarah Ann (Thomas) Boone and Asenath Campbell Thomas died within six days of each other in June 1852, due to complications from child birthing.

The two were sisters-in-law, and both were in their early twenties when they passed away.

And while deaths due to complications from child birth were not uncommon in the 1850s, the reason why the graves of these two young women were “hooded” may surprise you.

Reason for The Hooded Graves

Hooded graves, also known as “mortsafes”, were prevalent in England and Scotland in the 18th and 19th centuries as a means of preventing body snatchers from stealing the corpses of the newly-deceased, which they would then sell to medical schools, doctors, and anatomy instructors.

Philadelphia was the center of medical education in the Unites States in the 1850s, yet these schools had no legal means of obtaining cadavers for use in their studies until after the passage of the Pennsylvania Anatomy Act in 1867.

Rural Pennsylvania cemeteries were prime targets of these “resurrectionists”, as their remoteness meant the body snatchers were less likely to be detected while “working”.

Young female cadavers in particular were in great demand, and that’s very likely the reason why these two graves were “hooded” while others in the same cemetery were not.

Despite urban legends, the hooded graves WERE NOT constructed because the young women were believed to be vampires!

Today the hooded graves stand as a silent, decorative memorials to these two young women who met untimely deaths more than 170 years ago.

Directions to the Hooded Grave Cemetery

You can also use 277 Longwoods Rd, Catawissa, PA 17820 to find the cemetery; parking is at a roadside pull-off along this lightly-traveled rural route.

Knoebels Amusement Park near Elysburg is consistently ranked as one of the best amusement parks in the United States.

And a big part of why this park is so popular is that so much of it is FREE to experience, including free parking and free admission!

The Haunted Quaker Church in Fayette County isn’t known as much for its graves as it is for what supposedly happened in a Quaker meeting house in the cemetery.

Local legend has it that an area witch had been secretly tried and executed in the former meeting house, and that (predictably) the ghost of the witch now haunts the current chapel, which was built upon the ruins of the meeting house!

This story reached a fever pitch during the “Satanic Panic” in the 1980s, and the Quaker Church is still a favorite among taphophiles (individuals with a passion for visiting cemeteries).