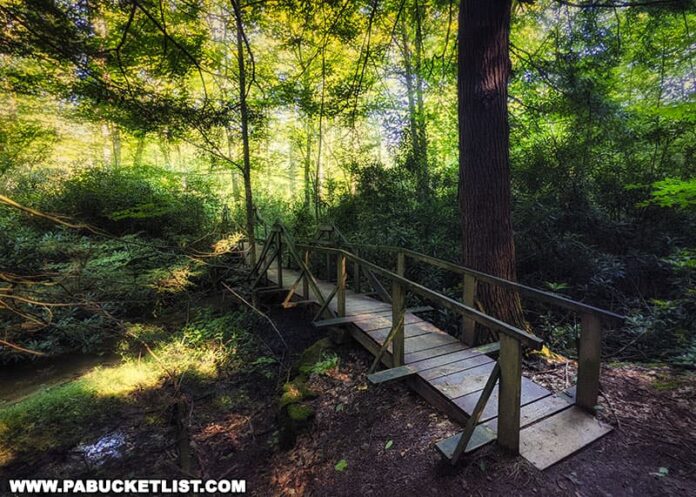 The Alan Seeger Natural Area was named by folklorist and conservationist Colonel Henry Shoemaker in 1921, in honor of American war poet Alan Seeger.

Seeger, a 28 year-old Harvard graduate and uncle of folk singer Pete Seeger, was killed while fighting for the French Foreign Legion against the German army during WWI.

How to Find the Alan Seeger Trail

There is a large parking area next to the Old Seeger Picnic Area.

The Alan Seeger Trail is a 0.8 mile loop hike, with less than 30 feet of elevation change over the course of the trail.

Features of the Alan Seeger Trail

The Alan Seeger Natural Area is famous for its old-growth hemlock, white pine, and yellow birch.

Huge colonies of rhododendron inhabit the riparian areas along the banks of Standing Stone Creek, and there are several places along the Alan Seeger Trail where you’ll pass through virtual tunnels of it.

There are several bridges over Standing Stone Creek along the Alan Seeger Trail.

A variety of mushrooms and mosses can be found along the forest floor.

And don’t forget to look up – the towering canopy above is as impressive as the trail below.

The Alan Seeger Trail is a perfect hike for children, beginners, or just about anyone who enjoys spending time in Nature.

Greenwood Furnace State Park is a 423 acre recreational paradise in the mountains of central Pennsylvania, just a few miles south of the Alan Seeger Trail.

Indian Lookout in the Rothrock State Forest is one of three scenic overlooks within minutes of one another.

Indian Wells Overlook is an exceptional scenic vista located right along the Mid State Trail near the Centre-Huntingdon county line.

14 Must-See Attractions in Huntingdon County is your guide to even more great things to see and do near the Alan Seeger Trail. 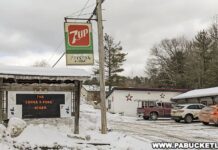 Enjoying the Choke and Puke Diner in Clinton County 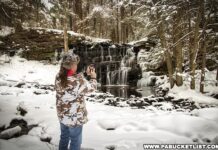 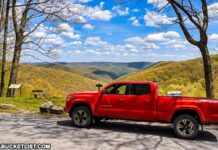 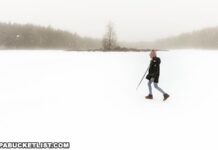