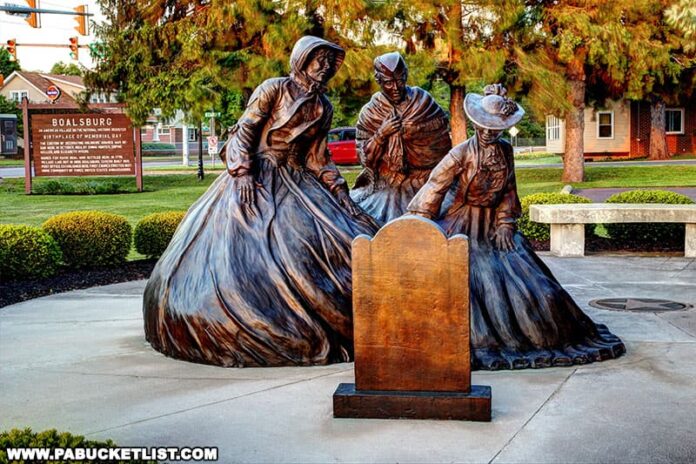 The village of Boalsburg in Centre County is recognized as the birthplace of Memorial Day in the United States.

And while this national holiday shines the spotlight on Boalsburg one day a year, ANY time is a good time to visit Boalsburg, with the entire village being considered a National Historic Site.

The Birthplace of Memorial Day

In October 1864, three Boalsburg women decorated the graves of two local men who had died serving the Union army in the Civil War.

A monument and plaques commemorating the birth of this national tradition stands just off of Route 322 in Boalsburg.

The actual graves they decorated are near the monument as well, behind the Zion Lutheran Church in Boalsburg.

Emma Hunt was one of those three women, and a likeness of her father’s tombstone is incorporated into the Memorial Day monument.

So know that when you are standing at the rear of the Zion Lutheran Church in Boalsburg, you are literally standing in the footsteps of history.

Not surprisingly, Memorial Day weekend is one of the busiest of the year in Boalsburg, with thousands of people descending upon the town to carry on the tradition of remembering those who gave their lives in service to our country.

Memorial Day weekend is also the unofficial start of summer, and as such numerous other “summery” events happen this weekend in Boalsburg as well.

A Day in Towne

A Day in Towne is a large craft show held throughout historic Boalsburg on Memorial Day.

Since Memorial Day was born out of the Civil War, it’s not surprising that Civil War reenactors take part in the activities in Boalsburg this weekend.

The Boalsburg Memorial Day military reenactment event includes canons that are used and fired by the Battery B Third
Pennsylvania Volunteers.

The grounds of the Pennsylvania Military Museum in Boalsburg are host to this annual Memorial Day car show for vehicles 25 years old and older.

The Pennsylvania Military Museum in Boalsburg honors the service of Pennsylvanians in all branches of the military, from colonial times to the present day.

The 18,000 square-foot museum houses an impressive collection of weapons, uniforms, vehicles, and photographs of Pennsylvania’s citizen-soldiers answering the call of duty in all of America’s major armed conflicts.

The museum is complemented by a 67-acre park that is home to additional vehicles, artillery pieces, and more than 30 monuments and memorials.

The Columbus Chapel and Boal Mansion

The Columbus Chapel in Boalsburg contains the largest and most important collection of Christopher Columbus artifacts and memorabilia on the North American continent!

The Boal Mansion has been in the Boal family for over 200 years, although it started out as a simple stone cabin in 1809.

David Boal, who built that original stone cabin, was a Scottish-Irish pioneer who founded the village of Boalsburg around a tavern and trading post he built here as well.

The grounds of the Boal Mansion typically play host to medieval reenactors over Memorial Day weekend.

There are also craft and food vendors, as well as activities such as face painting for the kids.

Historic Boalsburg is a beautiful place to visit any time of year, but even more so on Memorial Day weekend, in the birthplace of Memorial Day itself.

Decoration Day, as it was originally known, offers a chance for the remembrance of those who served our country and paid the ultimate price for our freedoms.

That history and those memories are alive and well in Boalsburg.

And sites like the Columbus Chapel and Boal Mansion, as well as the Pennsylvania Military Museum, make Boalsburg an inviting place for history lovers to visit any time of year!

Centre Furnace Mansion in State College served as the home for a series of “iron masters” in the late 1700s through the mid 1800s, and is also the birthplace of Penn State University.