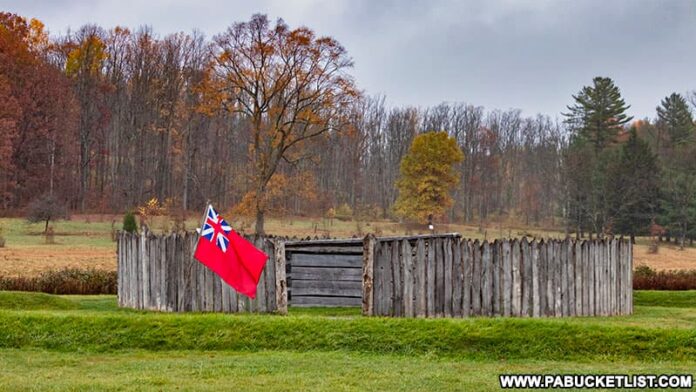 Fort Necessity in Fayette County is the site of the first battle in what would become known in North America as the French and Indian War (and known elsewhere as the Seven Years War), a global struggle for empire between the two superpowers of that time, France and England.

The Fort Necessity National Battlefield and three related, nearby properties managed by the National Park Service each tell an important part of the story of the French and Indian War and the years that followed, and I’ll describe these properties in their order of chronological importance to the story.

In 1754, both the French and the English realized the importance of controlling “the Ohio Country”, part of which is now western Pennsylvania.

The French saw the Ohio River and its tributaries as an important link between their colonies in Canada and Louisiana; the English saw the economic potential of expanding their eastern seaboard network of colonies further inland.

Governor Robert Dinwiddie of Virginia tasked 22 year-old George Washington with building an 80 mile-long wagon road from Wills Creek (modern day Cumberland, MD) to Redstone Creek on the banks of the Monongahela River, to aid in establishing new English settlements and as a route by which English troops and supplies could be moved into the area to expel the French from the region.

On May 24, 1754 Washington arrived at the Great Meadows (as the area where Fort Necessity was built was known at the time) and set up camp there.

Three days later, Washington’s Native American allies informed him that a group of French soldiers was headed his way.

On May 28, Washington, along with his colonial troops and Native American allies, ambushed the French troops at dawn in a wooded ravine now known as Jumonville Glen.

The lone French survivor made his way back to the French stronghold at Fort Duquesne (modern day Pittsburgh), where he informed the commander there (who happened to be Jumonville’s brother) what had occured.

Today you can walk among the boulders where this firefight took place and where very little has changed since 1754.

Although there are no great monuments or fortifications to see at Jumonville Glen (there are, however, some small interpretive signs along the trail from the parking lot to the glen), it is literally where the first shots in what would become the the first true “world war” were fired.

Following the skirmish at Jumonville Glen, Washington and his troops returned to the encampment at the Great Meadows.

Knowing a French reprisal was likely, he order the construction of a small circular fort which he called Fort Necessity (as it was built hastily out of necessity).

The fort was built in 5 days, was 53 feet in diameter, and had a 14-foot square log storehouse in the center of it.

Earthen mounds built around the perimeter of the fort were defended in part by “swivel guns”.

The reprisal attack Washington feared came on July 3, 1754, when 700 French and Native American troops surrounded Washington and his 400 troops.

Washington had made the tactical error of placing his fort too close to the surrounding woods, allowing the French and their Native American allies to fire on the fort at will from behind cover.

At 8 pm the French requested a truce to allow Washington the option of discussing a surrender.

Just after midnight, Washington agreed to surrender terms that allowed him and his troops to withdraw with honors (meaning they could keep their sidearms).

In exchange, Washington released the French prisoners taken at Jumonville Glen and signed what turned out to be a confession to assassinating de Jumonville (Washington later claimed the interpreter did not accurately explain to him what he was signing).

Today in addition to the replica of the fort (the original was burned to the ground by the French following Washington’s departure), there is an exceptional Visitor Center with many artifacts, interpretive displays, and a theatre that shows a brief film about the events that unfolded at and around Fort Necessity.

Fragments of the original stockade posts of Fort Necessity that were underground and escaped the fire set by the French are one of the more unique displays.

The replica of Fort Necessity, built on the site of the original, is located just a few hundred yards from the Visitor Center and accessible via a relatively flat walking trail.

In the summer months, you may be fortunate enough to catch historical reenactors onsite on the weekends, explaining the roles of the various parties (French, Native Americans, and British) at the Battle of Fort Necessity.

After Washington’s surrender at Fort Necessity, England decided to send a professional fighting force to try and remove the French from the Ohio Country. General Edward Braddock, with 45 years of military service, was sent to lead the effort in 1755.

Unfortunately for General Braddock, all of his experience was in fighting European-style in open fields, not in a dense wilderness.

On July 9, 1755, Braddock’s army (which included George Washington) was routed by a much smaller but more wilderness-savvy French and Native American force, with nearly 2/3 of the English army killed or wounded.

General Braddock himself was mortally wounded and was buried in a secret grave in the middle of the road so that his body would not be discovered and desecrated by pursuing enemy forces.

Today both his original, “secret” gravesite and the spot to where he was reinterred in 1804 are part of Braddock’s Park along modern day U.S. Route 40, just a few miles west of Fort Necessity.

The Mount Washington Tavern was a stagecoach stop along what was to become the National Road, the first federally-funded highway in America.

Situated on the hill above the Fort Necessity Battlefield, the tavern was built between 1827-1828.

From its inception in 1811 until the 1850s, the National Road was the main road from the east coast to the western frontier of the United States.

Today, much of U.S. Route 40 follows the path of the National Road.

Inside, you’ll find the first and second floors of the tavern recreated to look as they would have looked in the 1830’s.

The bar room at the Mount Washington Tavern no doubt saw many colorful characters pass through it’s door!

While on the second floor, you’ll find the bedrooms, complete with chamber pots under the beds.

Signage describing what you are looking at is placed throughout the Mount Washington Tavern.

In the age of COVID, I would be remiss if I didn’t tell you to check the Fort Necessity National Battlefield official website for the latest information on hours, admission prices and practices, and any potential closures.

For those with a keen interest in both US and world history, these sites at and around the Fort Necessity National Battlefield are where monumental events occured, and the what-ifs are profound as well.

What if George Washington had been killed at Fort Necessity, or alongside General Braddock the following year?

What if the English had decided the war against the French was too costly and ceded control of the “New World” to them?

You can ponder these questions and others as you explore the historic Fort Necessity National Battlefield in the PA Laurel Highlands!

Looking for a place to call home when visiting Fort Necessity?

If you’re looking for an Ohiopyle lodging experience like no other, look no further than Discover Ohiopyle.

Three years after General Braddock’s failed attempt to remove the French from Fort Duquesne and the “Ohio Country”, British General John Forbes arrived in Pennsylvania with a different strategy to get the job done.

His plan was to build a road and supply chain from Philadelphia in the east to within striking distance of Fort Duquesne in the west, constructing forts approximately every 50 miles along the road to reinforce and defend his supply lines.

Fort Ligonier in Westmoreland County was the last in that series of forts, and it was from here that in November of 1758 he launched his successful campaign to capture the French Fort Duquesne, where present-day Pittsburgh now stands.

Fort Ligonier is a full-scale reproduction of the original fort on its original location, and also has a wonderful Visitor Center and museum attached to it.

The Fort Bedford Museum in Bedford County pays tribute to the original Fort Bedford, built the same year as Fort Ligonier during the same military campaign by General Forbes and Colonel Bouquet.

Like Fort Ligonier, the Fort Bedford Museum contains exhibits and artifacts related to the French and Indian War as well as colonial life in general.

10 of the Best Hiking Trails at Ohiopyle State Park will introduce you to some of the best hiking in Fayette County.

10 Must-See Waterfalls at Ohiopyle State Park will show you how to find some of the best waterfalls falls in Fayette County.

Fallingwater, one of the most famous homes in the world, is located close to Fort Necessity and Ohiopyle State Park.

Exploring Fallingwater in Fayette County will show you the best things to see and do when touring this iconic Frank Lloyd Wright-designed home.

Kentuck Knob in Fayette County is a yet another Frank Lloyd Wright-designed home, built in 1954 for Isaac and Bernardine Hagan, founders of the Hagan Ice Cream company in nearby Uniontown, PA.

The Hagan House at Kentuck Knob is an example of what Wright called a Usonian home, his concept of what an affordable American home for the masses should look like.

Not only is the Jumonville Cross in Fayette County the tallest cross in Pennsylvania, it’s also a spectacular scenic overlook!

Nearby Laurel Caverns is billed as “Pennsylvania’s Largest Cave”, and is a great way to spend an hour or two BENEATH Fayette County!

Exploring the Haunted Quaker Church in Fayette County will take you to a rural hilltop church where history and urban legend combine for one incredible supernatural tale!

16 Must-See Attractions in Fayette County is your guide to even more great destinations close to Fort Necessity.