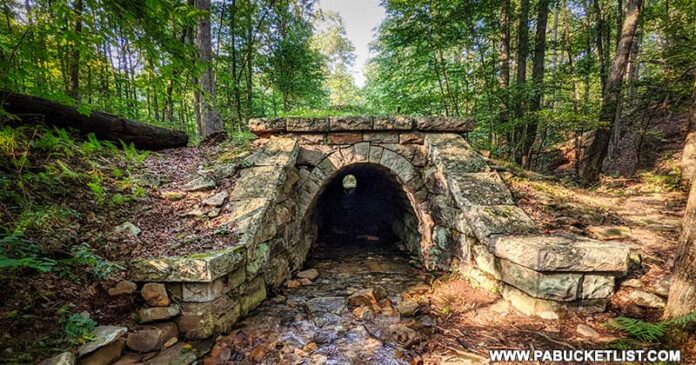 The abandoned South Penn Railroad Aqueduct in Fulton County is a perfectly-preserved remnant of a railroad that never was.

Built by skilled Sicilian stone masons without any mortar, this aqueduct looks as good now as it did when it was first built nearly 140 years ago!

In the late 1800s, William Vanderbilt was one of the richest railroad barons in the world.

He, along with fellow titan of industry Andrew Carnegie, set out to build a railroad that would compete directly with the Pennsylvania Railroad.

They chose a route across southern Pennsylvania (thus the name) that would require nine tunnels to be dug, along with numerous bridges and aqueducts to be constructed, to carry their rail line across rivers and streams.

One of those aqueducts was to be built near the Sideling Hill Tunnel, to carry the rail line over a small tributary of Oregon Creek.

To build these tunnels, bridge abutments, and aqueducts, Vanderbilt and Carnegie brought in Sicilian stone masons, some of the most skilled stone workers in the world at the time.

Cutting and fitting the stones onsite, these stone masons created structures as beautiful as they were functional.

Ultimately, the South Penn Railroad was never completed, as Vanderbilt and Carnegie struck a deal with the Pennsylvania Railroad in 1885, and the project was abandoned.

Hiking the Railroad Arch Trail in the Buchanan State Forest

The abandoned South Penn Railroad Aqueduct can be reached via the red-blazed Railroad Arch Trail in the Buchanan State Forest.

There is a large parking area between the trailhead and the Abandoned PA Turnpike bridge over Oregon Road.

Approximately 200 yards from the trailhead you’ll pass the ruins of a dynamite shed.

The trail eventually crosses over the small stream you’ve been hiking next to, via the footbridge pictured below.

You’ll reach the aqueduct 0.3 miles from the trailhead on Oregon Road.

Enjoy, but do not disturb the aqueduct – it’s a beautifully preserved part of Pennsylvania’s railroading history!

As mentioned previously, the abandoned Sideling Hill POW Camp is less than half a mile east of the Railroad Arch Trail.

This former CCC camp housed German prisoners of war from the end of the war in 1945 until the spring of 1946.

The Abandoned PA Turnpike is a 13 mile stretch of abandoned superhighway that loosely follows the original proposed route of the South Penn Railroad.

The highlights of the Abandoned PA Turnpike are two tunnels, both originally started in 1883 then abandoned when the South Penn Railroad project was halted.

Big Mountain Overlook in Fulton County is one of the best roadside scenic vistas in all of Pennsylvania!

The 7 Best Scenic Overlooks in the Buchanan State Forest will introduce you to more excellent views near the South Penn Railroad Aqueduct.