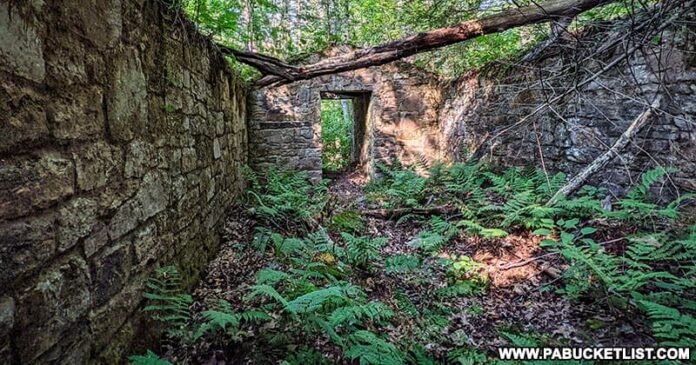 The forests of Pennsylvania were no strangers to POW camps during WWII, as the secret Pine Grove Furnace POW Camp operated just to the east in the Michaux State Forest (Cumberland County) as well.

The Sideling Hill POW Camp was originally constructed as a Civilian Conservation Corps camp in the 1930s (as was the Pine Grove Furnace POW Camp).

It also served as housing for workers building the nearby PA Turnpike(1939-40), as well as a camp for American “conscientious objectors” during WWII (1941-44).

Today the ruins of the abandoned Sideling Hill POW Camp can be found along Oregon Road in the Buchanan State Forest, where you’ll also find an informational kiosk describing the numbered ruins.

How to Find the Abandoned Sideling Hill POW Camp

The most prominent remains of the former POW Camp are the former officers quarters, which are now a privately owned cabin.

Across the road from the officers quarters you’ll see a large gravel parking lot and the kiosk mapping out the numbered ruins of the abandoned Sideling Hill POW Camp before you.

Exploring the Ruins of the Abandoned Sideling Hill POW Camp

Today many of the ruins at the former Sideling Hill POW Camp are simply foundations.

An exception to this is the former General’s quarters, where the front entrance and walls and are still fairly intact.

The stacked-stone walls of the General’s quarters have stood up to time and the elements well, nearly 100 years after they were first constructed.

Another landmark that has stood up well is a fireplace near the former camp mess hall.

The base of the camp flag pole is also in relatively good condition.

The Sideling Hill POW camp operated until March of 1946, when the prisoners were sent to Fort Indiantown Gap for processing and then returned to Germany.

Other Points of Interest Near the Sideling Hill POW Camp

Immediately to the left of the former officers quarters (the modern-day private cabin), you’ll find a marker for the Tunnel Trail.

This 0.4 mile trail leads to the western portal of the Sideling Hill Tunnel along the Abandoned PA Turnpike.

Workers lived in the barracks at the Sideling Hill camp during the construction of the turnpike in 1939-40, and would have walked or driven to work via this road (now trail) every day.

Today, the 13 mile-long Abandoned PA Turnpike is one of the most popular bike trails in Pennsylvania.

The Pennsylvania Turnpike was constructed, in large part, over the route of an earlier, proposed rail line known as the South Pennsylvania Railroad, abandoned remnants of which can be found nearby in the Buchanan State Forest.

The South Pennsylvania Railroad was backed by William Vanderbilt, one of the world’s richest men in the 1880s, and between 1883-85 he brought skilled stonemasons from Sicily into Pennsylvania to construct tunnels, bridge abutments, and aqueducts to accomodate what he hoped would be a rail line to compete directly with the Pennsylvania Railroad.

Although the South Pennsylvania Railroad project was ultimately abandoned before the rail line could be completed, one of the skillfully constructed aqueducts can still be found near the Sideling Hill POW Camp, in remarkably good condition.

Big Mountain Overlook in Fulton County is one of the finest roadside scenic vistas in all of Pennsylvania!

The 7 Best Scenic Overlooks in the Buchanan State Forest will introduce you to even more excellent vistas within easy driving distance of the Sideling Hill POW Camp.

As mentioned previously, the Pine Grove Furnace POW Camp was another secret WWII POW camp that housed German prisoners in a former CCC camp, the ruins of which you can still visit in the Michaux State Forest.