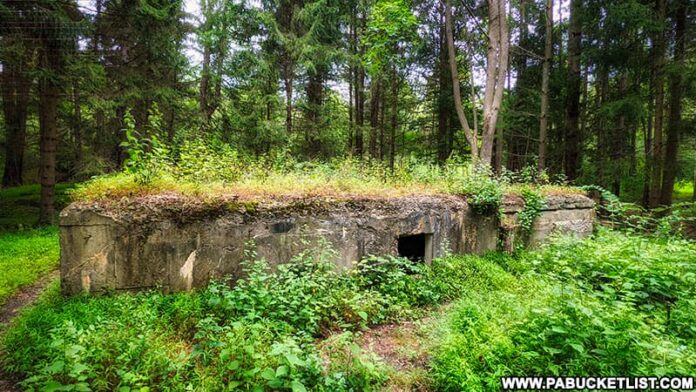 Did you know that during World War Two, German and Japanese prisoners of war were housed and interrogated at a secret POW camp in what is now the Michaux State Forest in Cumberland County?!

The Pine Grove Furnace POW Camp, as it was known at the time, was classified as “secret” and no civilians worked there or were allowed to have knowledge of the camp.

The purpose of the Pine Grove Furnace POW Camp was to interrogate German prisoners (and later Japanese prisoners as well) to glean strategic intelligence to further the American war effort in Europe and the Pacific.

Before the war, the area was used for farming and then a Civilian Conservation Corps Camp.

After the war, the area was used as a church camp (Camp Michaux), until 1972.

Today, it is a jumble of abandoned ruins from all of these different time periods, just waiting to be explored!

If navigating by GPS, use coordinates 40.03717, -77.33851 to guide you to the gravel parking area at the intersection of Michaux Road and Bunker Hill Road.

As mentioned previously, this area has been used during multiple eras for multiple purposes, so knowing what you’re looking at can be confusing.

Fortunately, the Cumberland County Historical Society has created a self-guided walking tour and accompanying map which you can pick up at the parking area.

The map corresponds to numbered posts located near ruins around the former camp, allowing you to identify what you are looking at.

There are ruins on both the east and west sides of Michaux Road, so there is really no right or wrong way to explore the site.

To me personally, the west side of the former POW camp was more interesting, and had an almost tropical jungle feel to it as I walked the trails on a steamy August morning.

There are ruins both above AND below ground.

As you’ll learn from the map, some of the ruins predate the POW camp, while others were built during the church camp era.

This CCC camp fountain is one of the best preserved ruins at the former Pine Grove Furnace POW Camp.

The remnants of a reservoir are also remarkably intact.

In one of the swampier parts of the former Pine Grove Furnace POW Camp, a boardwalk aids your hiking efforts.

A recently fallen tree reveals ruins that appear to have been covered up for decades.

On the east side of Michaux Road, the ruins of the Bunker Hill stone barn can still be seen, some of the oldest ruins at Camp Michaux.

Today, the ruins of the former Pine Grove Furnace POW Camp are literally being reabsorbed by the Earth.

My advice is to go explore this formerly secret POW camp in Cumberland County before the story and the site itself are erased by the sands of time!

Like the Pine Grove Furnace POW Camp, the Sideling Hill POW Camp started out as a CCC camp in the 1930s.

The abandoned Alvira bunkers are remnants of the American WWII war effort, as well as reminders of what lengths the federal government will go to to seize private property for “the greater good”.

Today, 149 dome-shaped concrete bunkers that once housed explosives for the US military are gradually being reclaimed by nature on State Game Lands 252 in Union County.

The goal at this secretive base was to develop nuclear-powered jet engines for the United States Air Force, so that fighter planes and bombers could stay airborne indefinitely, without refueling.

Today, as with the former Pine Grove Furnace POW Camp, the Quehanna nuclear jet engine testing bunkers are slowly being swallowed up by the Earth.

If all things old and abandoned fascinate you, then you’ll want to check out my road trip to the best abandoned places in PA!

This roadtrip highlights some of the best abandoned places in PA that are LEGAL TO VISIT, including the Abandoned PA Turnpike, Concrete City, and the abandoned Cresson State Prison.