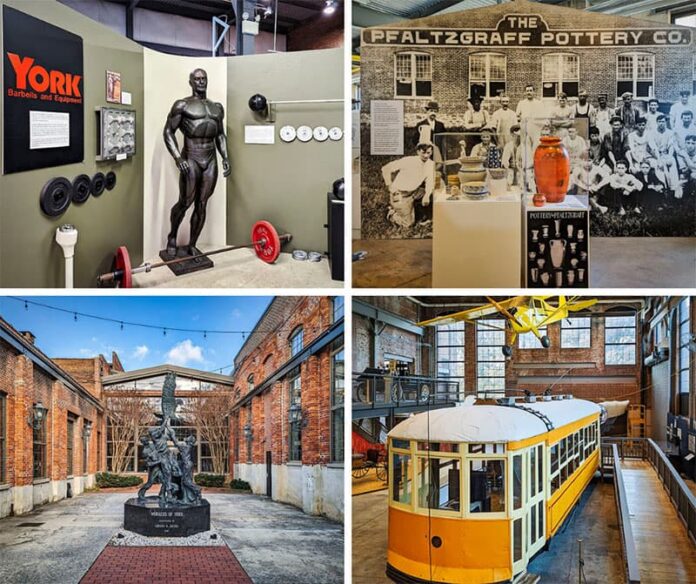 The York County Agricultural and Industrial Museum is a wonderful destination for history lovers of all ages!

Housed in a former factory complex in downtown York, the museum features thousands of artifacts and exhibits highlighting York County’s contributions to the areas of agriculture, transportation, and manufacturing.

The article is meant to highlight some of the best things to see and do at the York County Agricultural and Industrial Museum, but rest assured you could (and should) spend a few hours here taking in all the exhibits.

This exhibit hall highlights the many ways people and products have moved about York County over the years.

A 1940 train engine that you can sit at the controls of.

And several rare Pullman automobiles on display, built in York County between 1905-1917.

The agrarian history of York County is on display in the Agricultural Gallery.

One of the highlights is this working 3-story grist mill.

York-based Rutter’s sponsored an exhibit detailing how milk is produced, from farm to table.

This gallery highlights the many and varied manufacturers that call (or have called) York County home.

Some of the companies are synonymous with York, like York Barbells.

York Caskets is another company you may have heard of (or seen their tractor-trailers on a highway somewhere).

Other names you may have heard of, but never realized they originated in York County.

I, for one, didn’t realize Stauffer’s Animal Crackers originated in York County, despite having eaten a boatload of them over the years.

The Hall of Giants

The Hall of Giants contains exhibits too large to fit anywhere else in the museum.

This massive ammonia compressor was used for producing ice in the early 1900s, when “artificial ice” was a new concept.

The York County Agricultural and Industrial Museum is open Tuesday-Saturday from 10 am-4pm.

There is free street parking on West Princess Street in front of the museum – CLICK HERE to open a Google map to the museum (map will open in a separate window).

The Haines Shoe House is one of PA’s most recognizable roadside attractions, and now it’s a vacation rental home.

In fact, this is where I spent the night when visiting the York County Agricultural and Industrial Museum!

Since 1958, the York County Historical Society Museum has used artifacts and exhibits to highlight the region’s rich heritage and historical significance.

York, PA and the First National Thanksgiving dives into the fascinating backstory of this Revolutionary War-era event, which had nothing to do with Pilgrims and turkeys!