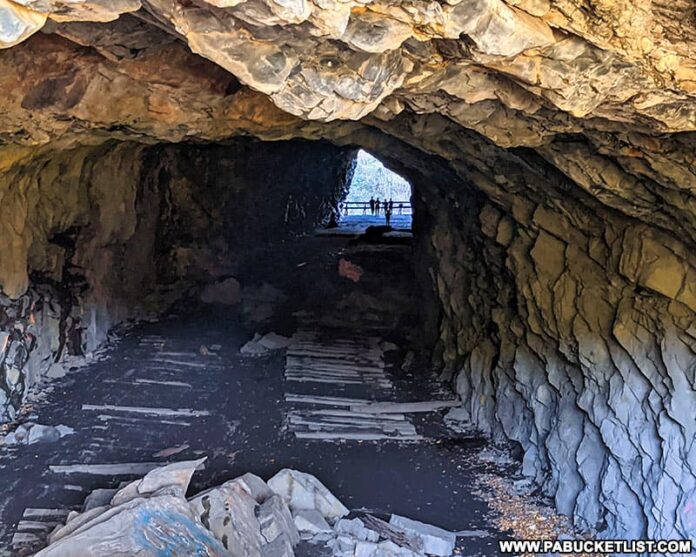 Now used exclusively by hikers and explorers, Turn Hole Tunnel and the scenic Moyer’s Rock Overlook located directly above it are both must-see destinations when visiting the Glen Onoko portion of Lehigh Gorge State Park.

Turn Hole Tunnel is named after the deep hole at the turn in the Lehigh River located directly below the tunnel, at the base of Moyer’s Rock.

Turn Hole Tunnel was constructed in 1866 by the Lehigh and Susquehanna Railroad when they extended a rail line from White Haven to Mauch Chunk (now Jim Thorpe).

The tunnel is 496 feet long, carried two sets of tracks through it (two sets of railroad ties can still be seen inside the tunnel), and was used in one capacity or another for rail traffic until it was abandoned in 1956.

How to Find the Abandoned Turn Hole Tunnel

The abandoned Turn Hole Tunnel is easy to spot as you approach the Glen Onoko access to Lehigh Gorge State Park.

At some point after it was abandoned, dirt and rocks were piled in front of the Turn Hole Tunnel entrance, no doubt to prevent vehicles from driving into it, but you can still easily walk into and through it.

Although you can see one end of the tunnel from the other, the middle section is somewhat dark, so having a flashlight handy is advisable.

From the far side / northern portal you can see the piers from the former railroad bridge still standing in the Lehigh River.

As you make your way back through Turn Hole Tunnel towards the parking area, note the 90 years worth of railroad soot on the roof!

An obvious but unofficial/unblazed trail extends from the parking area closest to the tunnel entrance up a rocky path to the overlook, which you’ll find at GPS coordinates 40.88270, -75.76108.

To reiterate: this is an unblazed and unofficial trail, so hike it at your own risk.

Hiking at a comfortable pace, I reached Moyer’s Rock Overlook in less than 10 minutes.

From the overlook you’ll see many of the same sights you did from the northern portal of the Turn Hole Tunnel, but from a much higher vantage point.

From the vast amount of graffiti at Moyer’s Rock Overlook, it seems that this is a popular local party spot, but if you can look past the paint, it’s still a fantastic vantage point.

With the magnificent Glen Onoko Falls Trail currently off-limits, per its landlord the PA Game Commission, Turn Hole Tunnel and Moyer’s Rock Overlook just may be the most interesting things to see and explore in Glen Onoko.

Whether you’re a railfan, an amateur archaeologist, or just a fan of all things old and abandoned, be sure to check out Turn Hole Tunnel and Moyer’s Rock Overlook next time you’re in the vicinity of Jim Thorpe and Lehigh Gorge State Park.

Buttermilk Falls at Lehigh Gorge State Park is a cascading waterfall along the Lehigh Gorge Rail Trail, 1/4 mile north of the Rockport Access to the park.

Luke’s Falls at Lehigh Gorge State Park is an easy 1/4 mile hike/bike ride south of the Rockport Access to the park.