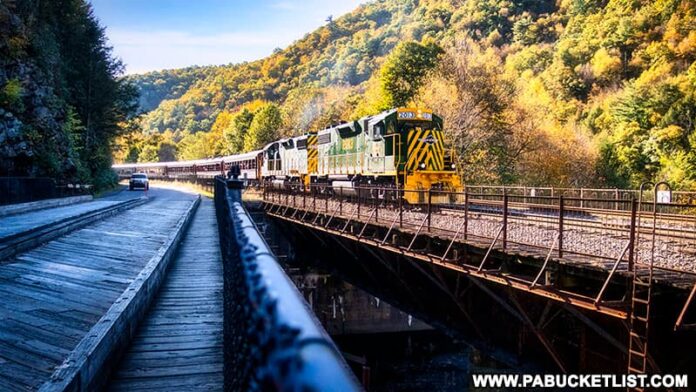 Carbon County, formed in 1843, was named for the extensive deposits of anthracite coal first discovered in the region in 1791.

From historic railroads to towering waterfalls to magnificent scenic overlooks,  here are 11 of the best things to see and do in Carbon County, PA!

Hickory Run State Park is a magnificent 15,990-acre recreational area in the western foothills of the Pocono Mountains.

The Jim Thorpe Memorial in Carbon County is the final resting place of the man voted “The Greatest Athlete of the First Half of the 20th Century” by the Associated Press.

Jim Thorpe was the first Native American to win a gold medal for the United States in the Olympics.

The views immediately in front of you at Tank Hollow Overlook are of the Lehigh River below and Lehigh Gorge State Park behind that.

Buttermilk Falls at Lehigh Gorge State Park is a cascading waterfall along the Lehigh Gorge Rail Trail in Carbon County.

It’s difficult to say how tall Buttermilk Falls at Lehigh Gorge State Park really is, because it seems to extend all the way to the sky!

To the north you have views of Lehigh Gorge State Park, while to the south the trail offers views of Jim Thorpe.

Turn Hole Tunnel was constructed in 1866 by the Lehigh and Susquehanna Railroad when they extended a rail line from White Haven to Mauch Chunk (now Jim Thorpe).

The tunnel is 496 feet long, carried two sets of tracks through it (two sets of railroad ties can still be seen inside the tunnel), and was used in one capacity or another for rail traffic until it was abandoned in 1956.

An obvious but unofficial/unblazed trail extends from the parking area closest to the tunnel entrance up a rocky path to the overlook.

Hawk Falls is a super-popular destination in Carbon County, due to ease of access and sheer natural beauty.

The trail from Route 534 to the base of Hawk Falls is part of what was once a wagon trail.

The Asa Packer Mansion was the home of philanthropist, railroad magnate, and founder of Lehigh University, Asa Packer.

Built in 1861 by Philadelphia architect Samuel Sloan, the home was constructed over a span of two years at a cost of $14,000 dollars, and sits on a hill overlooking downtown Jim Thorpe.

What About the Glen Onoko Falls Trail?

What was once THE most popular natural attraction in Carbon County, the Glen Onoko Falls Trail has been closed to the public since 2019.

And while you are no longer permitted to hike up the Glen Onoko Falls Trail, there are still plenty of trails you CAN hike on State Game Lands 141, including some that bring you out at the top of Cave Falls, the uppermost waterfall along Glen Onoko Run.