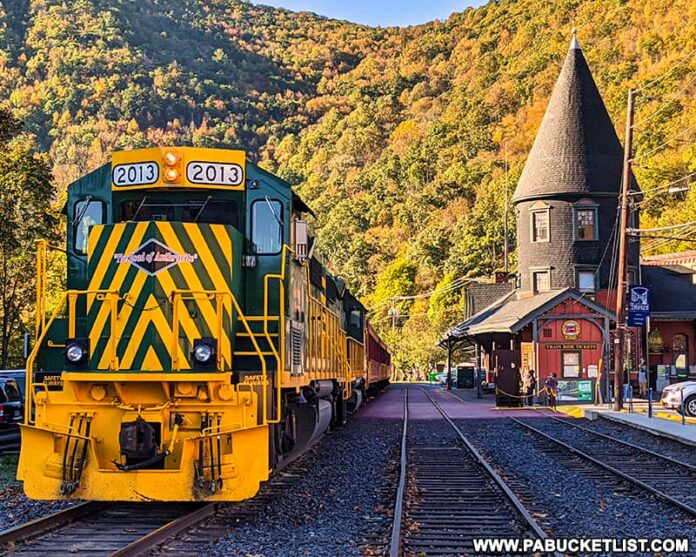 Recently I had a chance to take the fall foliage excursion, and I can confirm this is indeed a train ride you won’t soon forget!

Here’s a breakdown of what you need to know to make your own memories aboard the historic Lehigh Gorge Scenic Railway.

How to Find the Lehigh Gorge Scenic Railway

There is a large municipal parking lot next to the train station – the weekday I went it cost $8.00 for the entire day, which I thought was very reasonable.

The ticket booth is located next to the old train station.

I purchased a $20.00 seat on an open air car; seats on a standard coach car were a few dollars cheaper.

You can even rent out the entire caboose for $125, for up to 6 passengers.

The fall foliage excursions are 45 minute out-and back trips, departing from Jim Thorpe and heading north into Lehigh Gorge State Park, before reversing course and returning along the same tracks.

The day I rode the train, it was pulled by two diesel locomotives.

The train crosses over the Lehigh River on its way towards Glen Onoko.

Along the way we passed numerous cyclists riding the Lehigh Gorge Rail Trail.

The open air cars like I was riding on provide an excellent view of the passing landscape.

Eventually we returned to the train station in Jim Thorpe.

After getting a “make it official” photo, I set out to do a bit of exploring across the street from the train station.

Many people come to Jim Thorpe just to soak up the architecture.

Without strolling more than a block or two from the train station, you’ll understand why!

In a town whose fortunes were built on coal, it’s impressive to see how the economy here has pivoted to a largely tourism-driven one.

And the Lehigh Gorge Scenic Railway is certainly a big part of that.

Exploring Hickory Run State Park is an in-depth guide to the best things to see and do at this 15,990-acre park in Carbon County, just north of Jim Thorpe.

Buttermilk Falls at Lehigh Gorge State Park is a cascading waterfall along the Lehigh Gorge Rail Trail, 1/4 mile north of the Rockport Access to the park and rail trail.

Railfans will be happy to know that the East Broad Top Railroad in Huntingdon County is back and running again!