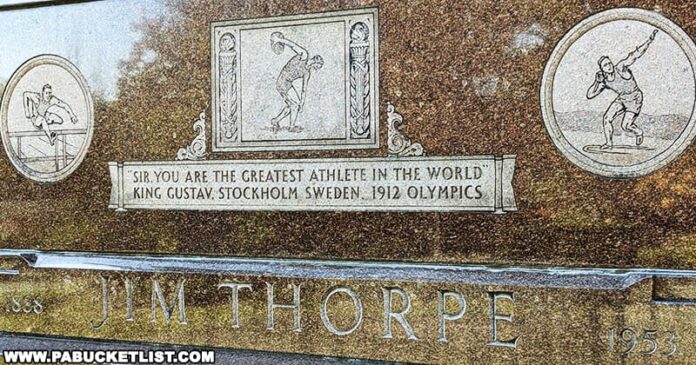 The Jim Thorpe Memorial in Carbon County is the final resting place of the man voted “The Greatest Athlete of the First Half of the 20th Century” by the Associated Press.

Jim Thorpe was the first Native American to win a gold medal for the United States in the Olympics.

Jim was Sac and Fox and Potawatomi, raised in present-day Oklahoma on the Sac and Fox Reservation, prior to Oklahoma statehood.

At age 16 he enrolled at the Carlisle Indian Industrial School in Carlisle, PA, where he became an All-American in football, playing halfback, defender, punter, and place-kicker for legendary coach Glenn “Pop” Warner.

At the 1912 Stockholm Olympics, Thorpe won both the pentathlon and the decathlon, and finished tied in fourth place for the high jump and seventh place in the long jump.

In 1913, he was controversially stripped of his gold medals after the International Olympic Committee no longer recognized him as an amateur athlete due to his time on a minor league baseball team in 1909 and 1910.

His medals were eventually reinstated in 1982; nearly three decades after his death.

How Jim Thorpe came to be buried in Carbon County, Pennsylvania is a somewhat controversial story, even to this day.

After Jim passed away at age 64 in 1953, his third wife, Patricia, arranged to sell his remains to two towns in eastern Pennsylvania called Mauch Chunk and East Mauch Chunk.

Thorpe’s remains were sold on the condition that the towns combine, call themselves “Jim Thorpe,” and erect a monument to Thorpe that included his remains.

The Mauch Chunk towns were searching for an economic boost, hoping the name change and memorial to the celebrated football player would help it become the home of the proposed Pro Football Hall of Fame, and lead to the construction of other tourist destinations as well.

In June 2010, two of Jim Thorpe’s sons sued the town of Jim Thorpe, in an attempt to have their father’s remains returned to his native Oklahoma.

Their case made it all the way to the U.S. Supreme Court, which in 2015 refused to hear the case, effectively bringing the matter to a close.

As of 2022, Jim Thorpe’s body remains interred in Jim Thorpe, Pennsylvania, a town he never visited while alive.

The grave site, a red granite mausoleum, rests on mounds of soil from Thorpe’s native Oklahoma, the New York Polo Grounds (home of the New York Giants baseball team), and from Stockholm’s Olympic stadium, where Thorpe won his gold medals in the decathlon and pentathlon in 1912.

The Thorpe Memorial also includes a sculpture, The Spirit of Thunder and Lightning, that was dedicated in 1998.

The sculpture is a tribute to Jim Thorpe’s Native American name and roots.

The memorial also features several information boards, providing facts from his life and statistics from the numerous sports in which he excelled.

Ironically, although the town’s name change and memorial did not cause Jim Thorpe, PA to become a major tourist destination, it has become that today, due to the town’s amazing architecture and proximity to many excellent natural and historic attractions.

So if you are visiting Jim Thorpe, PA to hike, bike, ride the train, or simply take in the sights, be sure to check out the memorial dedicated to the town’s namesake, one of the finest athletes the world has ever known.

Buttermilk Falls at Lehigh Gorge State Park is a cascading waterfall along the Lehigh Gorge Rail Trail, 1/4 mile north of the Rockport Access to the park and rail trail.

Exploring Hickory Run State Park is an in-depth guide to the best things to see and do at this 15,990-acre park in Carbon County, just north of Jim Thorpe.