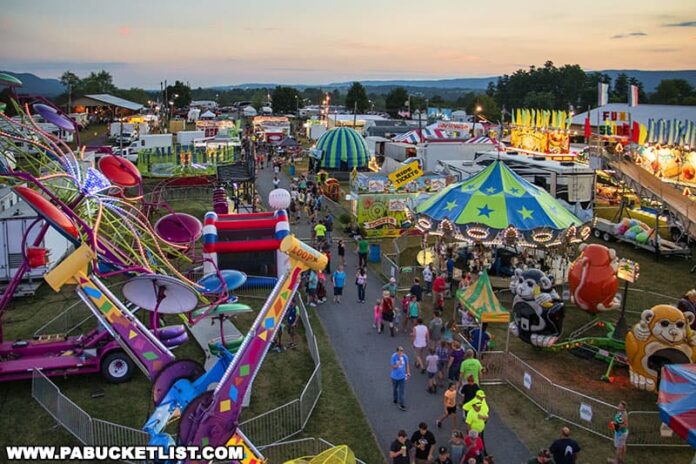 If you’re looking for a guide to the best Pennsylvania fairs in 2022, you’re in the right spot!

Growing up as a farm kid in western PA, I’ve been going to Pennsylvania fairs my entire life, but for those of you less familiar with the concept, I’ll give you a brief overview of what to expect at one of these celebrations of rural heritage.

If you’re already a seasoned fair veteran, scroll down to skip the overview and check out the Pennsylvania fairs schedule, broken down by months.

What Goes on at a Pennsylvania Fair?

Since the founding of the Commonwealth of Pennsylvania in 1682, agriculture has been a major part of the state’s economy and social fabric.

Fairs began (and continue) as a way to celebrate the successes of the harvest season, through food, entertainment, and friendly competitions among rural Pennsylvanians.

If you want bragging rights for growing the biggest pumpkin, raising the the biggest pig, or baking the best cookies, the local fair is the place to put it all on the line!

One of the great joys of attending a Pennsylvania fair is the food.

Throw your diet out the window and take a “cheat day”, because the variety of decadent fair foods is almost endless!

If it can be deep fried or dipped in chocolate, there’s a good chance you’ll find it at one of the “eat stands” at a Pennsylvania fair.

Livestock at a Pennsylvania Fair

You’ll find all sorts of livestock at a Pennsylvania fair, from baby bunnies to performing pigs!

Cows, horses, goats, sheep – there are plenty of opportunities to interact with familiar farm animals.

The Midway at a Pennsylvania Fair

The midway is where you’ll find the rides and games at a Pennsylvania fair.

You’ll also find plenty of games for kids of all ages, where stuffed animals are often the prize of choice.

Walking the midway after dark is especially fun, as the colored lights add a whole new dimension to the spectacle.

Below you’ll find the dates for 2022 Pennsylvania fairs occurring between July and October.

Simply click on the blue text links to view the official website of each fair, for hours, admission prices, directions, etc.

If you DON”T see you favorite fair listed below, AND it has a website, feel free to shoot me an email (rusty@rustyglessnerphotography.com) and I’ll add it to the guide!

Did you enjoy this Pennsylvania Fairs Guide?