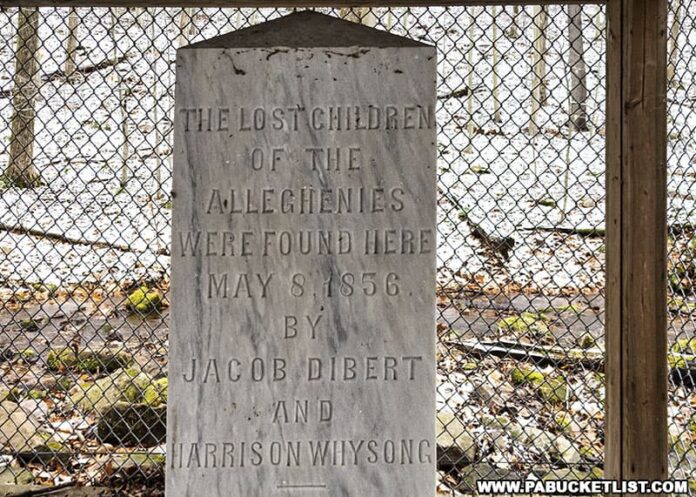 The Lost Children of the Alleghenies were two young brothers who wandered away from their Bedford County home in April, 1856 and perished in the nearby mountains, despite a massive search effort to save them.

On the 50th anniversary of their deaths, in 1906, a marble monument was erected on the spot their bodies were found, next to Ciana Run on present-day State Game Lands 26.

What Happened to the Lost Children of the Alleghenies

On April 24th, 1856 Samuel Cox returned home from a morning of hunting to discover that his children George (age 7) and Joseph (age 5) had wandered away from home.

Samuel and his wife Susannah (who thought the children had gone hunting with Samuel) began to frantically search for the children, and were soon joined by friends and neighbors in the search.

By the second day of the search, nearly one thousand people had poured into the region to search for the children, but to no avail.

Ten days after the two boys went missing, a nearby farmer named Jacob Dilbert began having dreams in which he went searching for and successfully located the children.

After having the same dream three nights in a row, he convinced his brother-in-law to accompany him and see if in fact he could locate this route he had followed in his dreams.

Miraculously, they were able to locate several of the landmarks in Jacob’s dreams, and tragically they found the two boys deceased at the foot of a birch tree along Ciana Run, exactly as Jacob had seen them in his dreams.

165 years later, people still come to this spot to pay their respects to the two young brothers who tragically perished here in the forest.

How to Find the Lost Children of the Alleghenies Monument

The Lost Children of the Alleghenies Monument (or Cox Monument as it is sometimes called) is located on State Game Lands 26 in Bedford County.

The parking area next to the trailhead leading to the monument is located along Monument Road at GPS coordinates 40.29302, -78.60492.

And while the parking area is within the boundaries of Blue Knob State Park, the Lost Children of the Alleghenies Monument is located on State Game Lands 26, so be sure to abide by the PA Game Commission’s blaze orange clothing requirements when visiting.

The hike itself is short – approximately 250 yards and essentially flat.

After crossing two footbridges, the well-worn path leads right to the monument and sign that describes the tragic incident, at GPS coordinates 40.29476, -78.60351.

The most challenging part of visiting the Lost Children of the Alleghenies Monument is navigating Monument Road itself, as it is a “no winter maintenance” dirt road in rather poor condition.

If you plan on visiting the Lost Children of the Alleghenies Monument yourself, I would STRONGLY recommend you do so in a vehicle with good ground clearance.

Pavia Overlook at Blue Knob State Park is located atop the second-highest mountain in Pennsylvania!

From museums to mountain vistas, from scenic backroads to an abandoned superhighway – there are a TON of must-see attractions in Bedford County, PA!