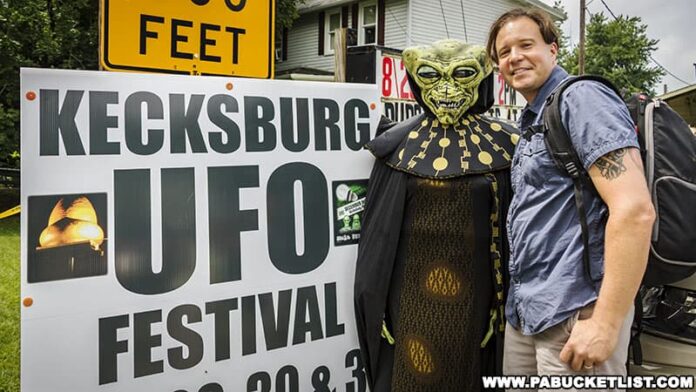 The Kecksburg UFO Festival is a 3-day fire company fundraiser inspired by a 1965 UFO crash that occurred nearby!

Part carnival and part UFO/paranormal convention, it all adds up to a fun-filled weekend in Westmoreland County.

History of the Kecksburg UFO Incident

On the evening of December 9, 1965, a large, bright fireball was seen in at least six U.S. states before crashing near the village of Kecksburg, about 30 miles southeast of Pittsburgh.

In 1990, the NBC television show Unsolved Mysteries aired an episode devoted to the incident, suggesting an extraterrestrial craft had crashed near Kecksburg, not a meteor as authorities in 1965 claimed.

The show quoted local witnesses to the crash who said they had found an object in the woods shaped like an acorn and about as large as a Volkswagen Beetle.

The craft supposedly bore writing resembling Egyptian hieroglyphs; the witnesses also claimed the object was removed under cover of darkness in a secret military operation.

In the years since, numerous books, movies, and television episodes have been devoted to the Kecksburg incident, with theorists suggesting whatever crashed near Kecksburg in 1965 could have been an errant Soviet satellite, an extraterrestrial craft, or even a secret Nazi UFO/time machine known as Die Glocke (“The Bell”)!

WHATEVER crashed near Kecksburg in 1965 may never be known, but the prop from the Unsolved Mysteries episode now resides on the hill next to the Kecksburg Volunteer Fire Department, and the Kecksburg UFO Festival is very much a real thing!

What Takes Place at the Kecksburg UFO Festival

In many ways the Kecksburg UFO Festival is similar to fireman’s carnivals across the state – there’s plenty of food, a corn hole tournament, and a parade (albeit a UFO-themed parade in the case of Kecksburg).

Cheesesteaks, funnel cakes, kettle corn – all your favorite “fair foods” can be found at the festival.

Where the Kecksburg UFO Festival differs from other fireman’s carnivals is that there are numerous vendors and celebrities from the UFO-investigator community on hand (think Ancient Aliens and Hangar 1), making appearances, giving talks, and selling merchandise.

At the most recent UFO Festival I was honored to meet Stan Gordon, renowned UFO and paranormal investigator, author, and film maker.

You’ll also find plenty of vendors selling original works of art related to the Kecksburg UFO Incident and the paranormal in general.

Even the chainsaw carvers get in on the act, depicting aliens and Bigfoot in their wooden works of art.

The UFO Store inside the Fireman’s social hall is where to get your “official” UFO Festival swag that benefits the fire company.

Hats, t-shirts, glassware – you name it, the UFO Store has it!

If you can’t make it to the festival, you can visit the Kecksburg “Space Acorn” any time of year, on the hill above the fire hall.

The festival draws thousands of visitors (the terrestrial kind) to this tiny town over the course of the weekend.

And because the festival benefits the Kecksburg Volunteer Fire Department, you can feel extra-good about indulging your curiosity and attending the Kecksburg UFO Festival in Westmoreland County!

14 Must-See Attractions in Westmoreland County is your guide to the best things to see and do near Kecksburg.

From historic forts to museums to state parks, there’s lots to see and do in Westmoreland County!