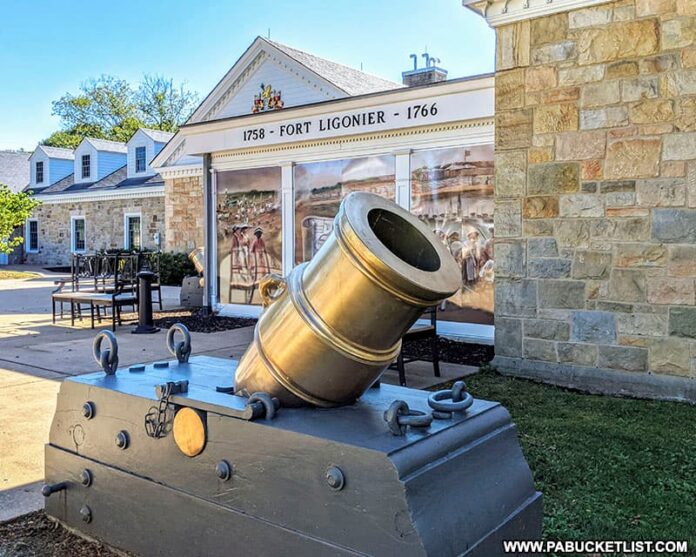 Westmoreland County, founded in 1773, makes up one-third of the Laurel Highlands in western PA (Somerset and Fayette counties making up the other two-thirds).

From historic forts to museums to state parks, here are 14 of the best things to see and do in Westmoreland County.

Located on State Game Lands 42, Mill Creek Falls is an easy 1/2 mile walk along 2 forest roads to reach the falls.

The Lincoln Highway Experience is a museum dedicated to telling the story of the Lincoln Highway, the first transcontinental automobile route linking the east and west coasts of the United States.

Some of the artifacts on display are authentically old, while others are eclectically modern and part of the efforts to revitalize tourism along the Lincoln Highway.

Spruce Flats Bog in Westmoreland County is one of the most unique ecosystems in all of Pennsylvania – a high altitude bog featuring plants and trees found nowhere else in the state.

The strong westerly winds at Spruce Flats Bog cause the trees to take on a bent shape known as Krummholz – German for “crooked wood”.

Adam Falls is normally no gusher, but if you’re lucky enough to catch it after the spring thaw or a heavy rain it can be quite impressive!

Wolf Rocks are quite expansive – nearly 150 feet of jutting cliffside to explore.

The abandoned hunting lodge at Linn Run State Park is a remarkable set of ruins from the early days of “retreat camping” in Westmoreland County.

The abandoned hunting lodge at Linn Run State Park is located along the Flat Rock Trail, which runs parallel to Linn Run.

There are ten rental cabins at Linn Run State Park, nine rustic (no indoor plumbing) and one modern.

Laurel Mountain State Park is a 493-acre ski resort in Westmoreland County, donated to the state in 1964 by Richard K. Mellon.

Started in 1939 as a private facility by Mellon and other wealthy Pittsburgh industrialists, it was opened to the public following World War II and became popularly known as the “Ski Capital of Pennsylvania.”

Laurel Mountain boast the highest vertical drop on the Laurel Ridge in Pennsylvania at 761 feet.

The Jonnet Flea Market along Route 22 in Westmoreland County is one of PA’s largest indoor flea markets.

You could easily spend an entire afternoon picking through the treasures for sale in this former car dealership turned massive bazaar of bargains.

The 1,200-acre Keystone State Park in Westmoreland County is a great place for day-trips and family vacations year round!

The Kecksburg UFO Festival is a 3-day fire company fundraiser inspired by a 1965 UFO crash that occurred nearby in Westmoreland County.

If you can’t make it to the festival, you can visit the Kecksburg “Space Acorn” any time of year, on the grounds of the Kecksburg Fire Department.

16 Must-See Attractions in Fayette County shows you the best things to see and do in Westmoreland County’s neighbor to the south!

15 Must-See Attractions in Somerset County is your guide to the best things to see and do in Westmoreland County’s neighbor to the east.

10 Must-See Attractions in Cambria County is your guide to the best things to see and do in Westmoreland County’s neighbor to the northeast.

7 Man-Made Wonders of the PA Laurel Highlands is your guide to the 7 most iconic structures in the region.

With one of its four locations along Route 22 in Westmoreland County, Gene and Boots Candies is a western PA tradition!