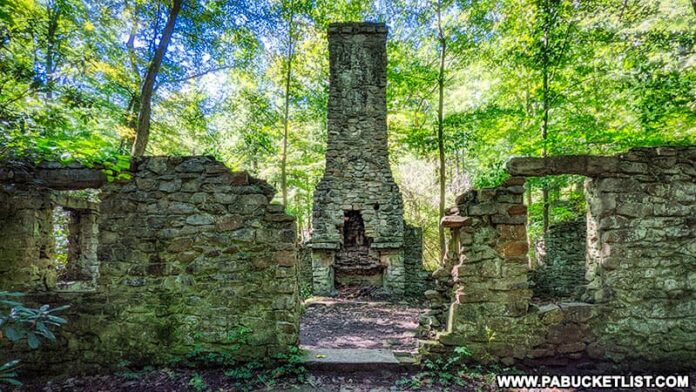 History of the McGinnis Rod and Gun Club

In the early 1920s the State of Pennsylvania was actively encouraging city dwellers to build “weekend retreats” in the country, offering $2/year leases on quarter-acre lots of state forest land.

“Retreating” from urban life was a new ideal sweeping the United States, thought to be good for societal health (something this author happens to believe is still sound advice).

The McGinnis Rod and Gun Club was one such retreat.

Built in 1922, the McGinnis Rod and Gun Club existed for roughly 20 years before the building was consumed by fire, leaving only the stone walls and fireplace you see today.

The land upon which the abandoned hunting lodge sat was eventually absorbed by Linn Run State Park, which was founded in 1924.

The abandoned hunting lodge at Linn Run State Park is located along the Flat Rock Trail, which runs parallel to Linn Run and would have been a road leading to the McGinnis Rod and Gun Club in 1922.

The hike from the parking area to the abandoned hunting lodge is 400 yards, and essentially flat.

Exploring the Ruins of the Abandoned Hunting Lodge

Considering these stones were laid 100 years ago, the ruins of the abandoned hunting lodge at Linn Run State Park have held up to the natural elements in western Pennsylvania remarkably well!

An ice house built next to the lodge looks like it could be used even today, if only its original wooden door were replaced.

If you walk around to the back of the lodge, you’ll see just how close to Linn Run the structure was built.

It’s hard to imagine a more idyllic setting for “retreating” than on the banks of Linn Run.

At the time period the McGinnis Rod and Gun Club was founded (1922), reforesting this land once clear-cut by timber companies was a priority, as was reintroducing whitetail deer, which had been hunted to near-extinction on Pennsylvania

As you explore this abandoned hunting lodge at Linn Run State Park now, it’s hard not to think about the wonderful times that must have been had here in the 1920s and 30s, all the while making your own memories along the banks of Linn Run in Westmoreland County.

Adam Falls at Linn Run State Park is accessed from the same parking area as the abandoned hunting lodge, but is located 200 yards in the opposite direction.

Wolf Rocks Overlook is located in the adjacent Forbes State Forest and literally looks out over Linn Run State Park.

Beam Rocks Overlook is located in the Forbes State Forest near near Linn Run State Park, and offers a fantastic 180° view from of Somerset County and the Laurel Highlands Hiking Trail below.

Spruce Flats Bog is a quick and easy mountain top hike, and the uniqueness of this 28-acre ecosystem makes it an interesting pit-stop while exploring the Forbes State Forest.

Fort Ligonier in Westmoreland County is a historically accurate reproduction of a British fort originally constructed in 1758, during what would become known as the French and Indian War.