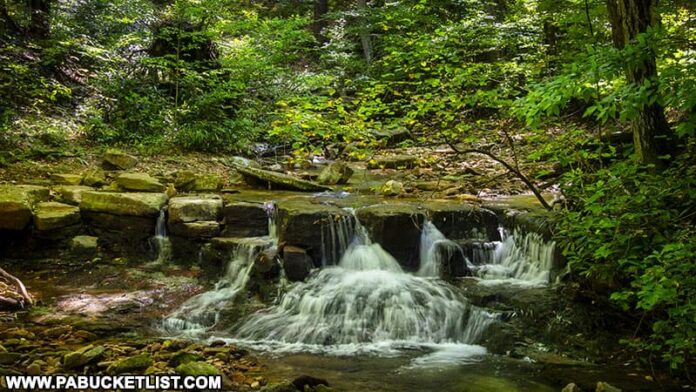 How to Find Fish Run Falls in the Forbes State Forest.

The hike itself follows the bike trail for 0.3 miles down a slight grade from the parking area along Linn Run Road.

Near the trailhead is a small clearing with several interpretive exhibits related to the Pittsburgh, Westmoreland, and Somerset Railroad.

The Pittsburgh, Westmoreland, and Somerset Railroad

The PW&S Railroad started out as a timber train, hauling logs cut in what is now the Forbes State Forest and Linn Run State Park to a sawmill in Ligonier.

The finished lumber was then hauled further west to Latrobe and Pittsburgh.

Eventually the PW&S also hauled passengers back and forth between Somerset and Pittsburgh, as well as points in-between.

Just down the road from Fish Run Falls, you’ll find a section of the old PW&S railbed at Linn Run State Park, along with more historical displays about the railroad.

The are lots of angles to photograph Fish Run Falls from, starting with the PW&S Trail which sits above Fish Run.

Down at stream level, this is a shallow body of water (best visited after heavy rain or spring thaw), so crossing back and forth is a pretty straightforward affair.

There really are no “bad” angles to shoot this waterfall from.

And the fall foliage views here are EXCELLENT in October!

A pair of stone aqueducts built by the PW&S Railroad would have allowed trains to to cross Fish Run as they went up and down Laurel Mountain.

The viaducts are separated by approximately 100 yards, with the one closest to Fish Run Falls being the easier of the two to explore.

These two aqueducts are products of functional necessity, with no style points being sought during their construction.

Nevertheless, these rough-looking stone aqueducts are still standing, having carried the waters of Fish Run beneath the old rail bed turned bike trail for more than 120 years.