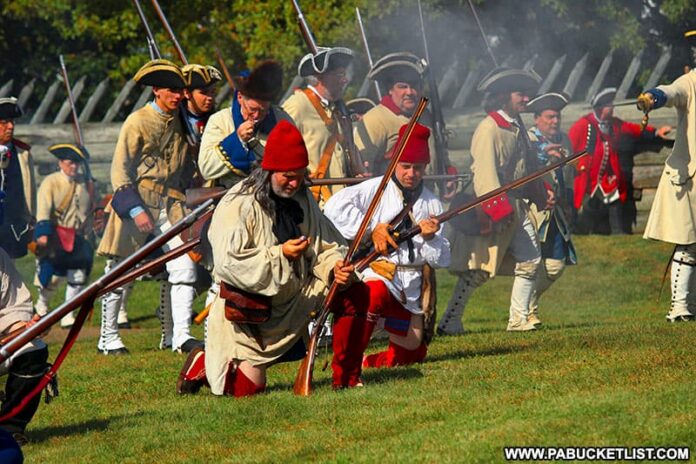 In the mid-1750s, what is now western Pennsylvania was a wild frontier, with ownership claimed and contested by the French, British, and Native Americans.

The French occupied a position of strength in the form of Fort Duquesne at the Forks of the Ohio River, now known as Pittsburgh.

Controlling the Ohio River meant controlling travel and trade routes in the interior of North America, and British General John Forbes was determined to remove the French from this fort and establish control of the region for the British empire.

So General Forbes set out to build a road (to become known as Forbes Road) from Philadelphia in the east to Fort Duquesne in the west, by which he could move troops and supplies across Pennsylvania and into position to eventually capture Fort Duquesne.

Along the route, approximately every 50 miles, he built a series of forts, with Fort Ligonier being the final fort along the road before the intended target of Fort Duquesne.

Construction on the Post at Loyalhanna (as Fort Ligonier was known at the time) began in the late summer of 1758, and the fort withstood a major attack by the French and their Indian allies in October of 1758, before the fort was even completed.

In November of 1758 French and Indian forces again staged a raid on the Post at Loyalhanna, this time trying to steal horses and cattle from outside the fort.

French prisoners captured during the raid were interrogated and provided information that Fort Duquesne was in fact very undermanned and undersupplied.

Sensing an opportunity to attack the French position in its weakened state, General Forbes immediately launched plans to strike.

But before the British troops could reach Fort Duquesne, the French and their Indian allies, sensing imminent defeat, burned and abandoned the fort.

This British took control of the position on November 24, 1758, where they built a new fort, Fort Pitt, later to become Pittsburgh.

To commemorate the victory, General Forbes changed the name of the Post at Loyalhanna to Fort Ligonier, in honor of Field Marshall Sir John Ligonier, Commander-in-Chief of the British Army at the time.

Fort Ligonier remained in use until it was decommissioned in 1766.

The Museum at Fort Ligonier

Fans of military history will enjoy the various small arms and artillery pieces inside the museum.

Numerous interpretive exhibits show what day-to-day life was like at Fort Ligonier.

One particularly fascinating exhibit is a pair of pistols once owned and carried by George Washington.

Ironically, the pistols were a gift from Frenchman Marquis de Lafayette, who served the Continental Army with distinction during the American Revolutionary War, providing tactical leadership while securing vital assistance from his native France.

This a little more than a decade after Washington had fought WITH the British AGAINST the French forces in North America!

Another interesting display from more recent history tells of the connection between Fred Rogers (Mister Rogers of children’s television fame) and Fort Ligonier.

The Fort Ligonier museum also boasts an impressive art gallery, with portraits and paintings of subjects related to the fort and/or the French and Indian War.

And what historical attraction would be complete without a well-appointed gift shop!

Once you’ve toured the museum and more fully understand the backstory, it’s time to explore Fort Ligonier itself.

Much of the original fort has been painstakingly recreated in a historically accurate way.

Numerous artillery pieces are on display around the outer defenses of the fort.

Behind the inner defenses you’ll find numerous quarters, including those of General Forbes himself.

The barracks themselves were/are quite spartan.

While some of the cannons are beautifully ornate.

Life in a frontier fort was certainly not glamorous, and one can begin to grasp what the “daily grind’ was like by touring the various buildings inside Fort Ligonier.

One weekend every October (in a non-COVID year), near the anniversary of the 1758 assault on Fort Ligonier, a town-wide celebration know as Fort Ligonier Days takes place at the fort and various other locations around Ligonier.

At the fort itself you can witness battle reenactment scenes, scheduled throughout the weekend.

Between “battles” you can interact with the reenactors and learn from folks whose passion is recreating and passing on the history of this fort and era.

There is also a MASSIVE parade associated with Fort Ligonier Days, quite possibly the longest parade I’ve ever personally witnessed!

Of course it wouldn’t be a western PA parade without the Shriners in their tiny cars.

Even YouTube sensation Pittsburgh Dad has been a participant.

The Fort Ligonier Days parade is about as All-American as you can get!

Of course in the age of COVID, I would be remiss if I didn’t tell you to check the Fort Ligonier official website for the latest hours, admission prices and practices, and any potential closures BEFORE you make the drive there!

Want to make your visit to Fort Ligonier even MORE epic?

Rent a one-of-a-kind vacation home near Fort Ligonier through Vrbo!

Check out HUNDREDS of cabins, cottages, and lodge homes near Fort Ligonier at the Vrbo link below.

Many of the events that lead up to the construction of Fort Ligonier took place a few years earlier at and around what is now the Fort Necessity National Battlefield in neighboring Fayette County.

Fort Necessity itself, along with several related historic sites maintained by the National Park Service, tell the story of how the French and Indian War in North America got started.

The Fort Bedford Museum in Bedford County pays tribute to the original Fort Bedford, built the same year as Fort Ligonier during the same military campaign by General Forbes and Colonel Bouquet.

Like Fort Ligonier, the Fort Bedford Museum features exhibits and artifacts related to the French and Indian War and colonial life in general.

The Lincoln Highway Experience, located just a few miles west of Fort Ligonier, is a museum dedicated to telling the story of the Lincoln Highway, the first transcontinental automobile route linking the east and west coasts of the United States.

Adam Falls is just one of the many extraordinary sights to see at nearby Linn Run State Park.

Spruce Flats Bog is a unique high altitude bog that features trees and plants you won’t find anywhere else in Pennsylvania.

The Flight 93 National Memorial is located in neighboring Somerset County, also along the Lincoln Highway.