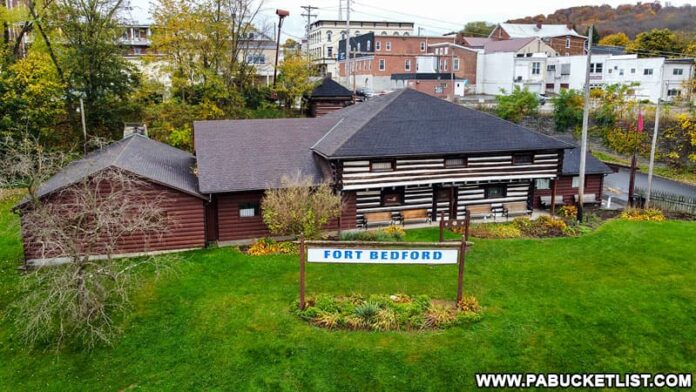 Located just off the Lincoln Highway in downtown Bedford, the Fort Bedford Museum is an outstanding place to learn about the history of this part of Pennsylvania, once considered the “Wild West” of colonial America.

Fort Bedford was constructed during the French and Indian War by British troops under the command of Colonel Henry Bouquet, who in turn answered to General John Forbes.

Three years earlier in 1755, British General Edward Braddock had been soundly defeated (and mortally wounded) in an attempt to remove the French from Fort Duquesne, site of present-day Pittsburgh.

To succeed where Braddock had failed, General Forbes ordered a road be built from Philadelphia westward towards Fort Duquesne, with a series of forts and supply depots built roughly every 50 miles along the route to protect his supply lines.

The Fort Bedford Museum is NOT a replica of the original fort, like Fort Ligonier in Westmoreland County, built during the same military campaign.

Rather, it is fashioned to look like a “blockhouse” from around the same time period, one of several blockhouses that are believed to have been part of the original Fort Bedford.

There is, however, a detailed model of what the original Fort Bedford is believed to have looked like on display inside the museum.

The Fort Bedford Museum contains thousands of artifacts and numerous exhibits that tell the story of the people and events that shaped the history of present-day Bedford County.

Being named after a fort, of course there are plenty of military artifacts on display, as you would expect.

But there is much more to the museum than just “war stories”.

Means of transportation, styles of clothing and furniture, famous citizens, and inventions that were born in Bedford County are chronicled as well.

Portions of the footprint of the original Fort Bedford are visible at a small park just a few hundred yards east of the Fort Bedford Museum.

Accessible either from East Pitt Street (the original Lincoln Highway) or via a riverwalk and stairs from below, the original foundation and reproduction of the stockade are worth seeing if you’re a history buff.

For up-to-date hours, admission prices, and information on potential closures (COVID-related or otherwise), please be sure to check the Fort Bedford Museum’s official website for details.

Fort Necessity in Fayette County is where the first shots of the French and Indian War were fired.

It is also the site of George Washington’s only military surrender, in 1754.

Fort Ligonier in Westmoreland County was built the same year as Fort Bedford, and is the site from which General Forbes launched his successful mission to take Fort Duquesne from the French.

This full-sized replica of the original British fort also boasts an outstanding museum dedicated to the French and Indian War.

Want to make your trip to Fort Bedford even MORE epic?

Rent a one-of-a-kind vacation home near Fort Bedford through Vrbo!

Check out dozens of unique cabins, cottages, and vacation homes near Fort Bedford at the Vrbo link below.

Located just a few blocks from Fort Bedford is Dunkle’s Gulf Station, an art deco-style service station built along the Lincoln Highway in 1933 and still in operation to this day!

The Bedford Coffee Pot is “roadside giant” from the heyday of the Lincoln Highway, located along the western edge of Bedford.

The 1806 Old Log Church is the oldest standing church in Bedford County, located along the Lincoln Highway just west of Bedford.

The Grand View Ship Hotel near Bedford was, in its prime, one of the most famous attractions along the Lincoln Highway, the first transcontinental automobile route linking the east and west coasts of the United States.

The Abandoned PA Turnpike is a 13 mile bike trail between Bedford and Fulton counties, a remnant of the first “superhighway” in the United States.

19 Must-See Destinations in Bedford County will show you even more great places to visit near the Fort Bedford Museum.