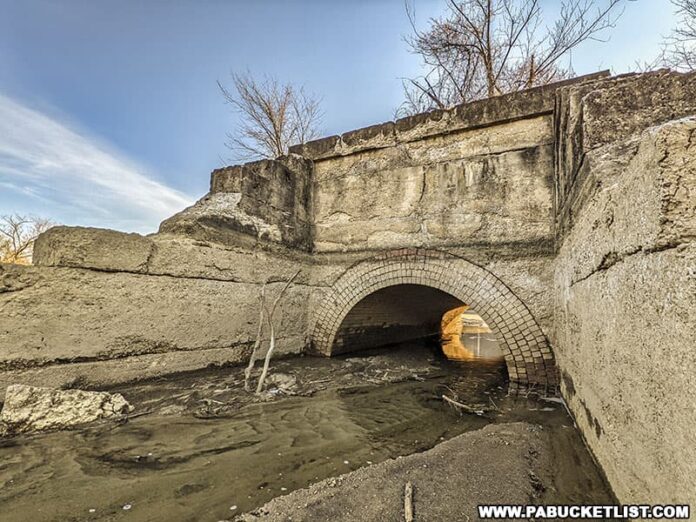 Hidden around and beneath the surface of Raystown Lake in Huntingdon County are abandoned ruins of roads, bridges, and structures of historical significance, just waiting to be rediscovered!

When Raystown Lake (the largest lake entirely within Pennsylvania) was completed in 1973, many structures were completely swallowed up by its waters, which run as deep as 200 feet in some places.

Other nearby structures, while not covered by water, were abandoned and are slowly being reabsorbed by the vegetation surrounding the lakeshore.

But as winter approaches, the vegetation dies back and the waters of Raystown Lake are drawn down, allowing for a glimpse at some of these hidden ruins not normally visible the rest of the year.

Several of these remarkable and historic structures are located near Marklesburg, and they are the subject of this article.

How to Find the Hidden Ruins at Raystown Lake Near Marklesburg

The parking area for exploring the hidden ruins around Raystown Lake described here is located at the gated end of Weller Road, at GPS coordinates 40.39390, -78.14169.

The Brumbaugh Homestead at Raystown Lake

Originally constructed in 1804, the Brumbaugh homestead was home to seven generations of the same family, including Martin Brumbaugh, who would become Governor of Pennsylvania from 1915-1919.

Over the years, additions were made to the original stone structure, as pictured in this public domain image below.

The Brumbaugh homestead eventually became part of the Raystown Lake property, and the house was added to the National Register of Historic Places in 1979.

Unfortunately, a series of subsequent fires and decades of neglect have left the historic structure just a shell of its former self.

The Huntingdon and Broad Top Mountain Railroad once connected Huntingdon to Bedford, running straight through what later would become Raystown Lake.

When Raystown Lake was completed, several stretches of the former railroad were swallowed up by water, including a stretch near the Brumbaugh homestead.

Now when the lake is drawn down for the winter, the hidden ruins of the rail line and its associated bridge become visible once again.

A few yards north of the old railroad bridge, you can walk across the drawn-down lake bed at an area known historically as Brumbaugh Crossing.

Follow this land bridge to the opposite shore and you’ll intersect with Garner Road, an abandoned paved road that now plunges into Raystown Lake.

While not abandoned, Valley View Cemetery overlooking the old Brumbaugh homestead and Raystown Lake is significant in that it is the final resting place of former Pennsylvania Governor Martin Brumbaugh.

You can drive up to the cemetery by following the road between these two columns.

The Governor’s gravesite is easy to find as it is located at the base of the only flagpole in the cemetery.

On your way out, take note of the PA historical marker honoring Governor Brumbaugh, at the intersection of Route 26 and Weller Road.

4 Magnificent Scenic Overlooks at Raystown Lake in Huntingdon County is your guide to some of the best vistas overlooking the waters of Raystown Lake.

Trough Creek State Park in Huntingdon County is home to a variety of attractions, including the spectacular Rainbow Falls.

26 Abandoned Places in PA You Can Legally Explore is your guide to some the more interesting abandoned places in Pennsylvania I have explored in recent years.

12 Must-See Attractions in Huntingdon County is your guide to even more great adventures close to Raystown Lake.