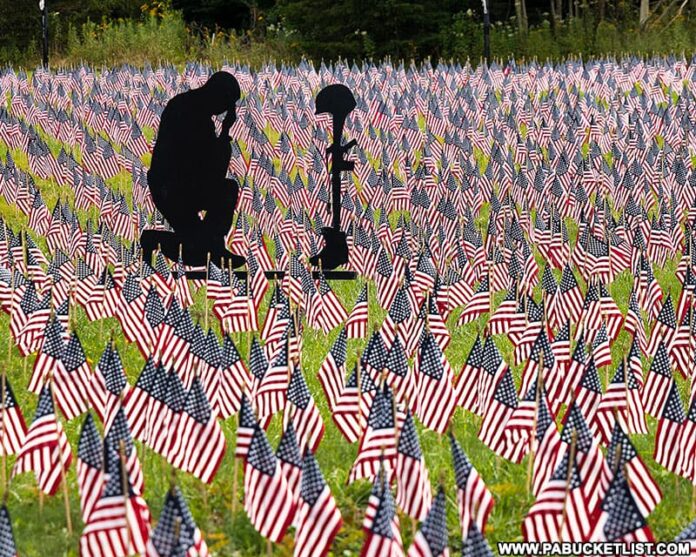 Patriot Park near Shanksville is the future home of a permanent memorial intended to honor all those who died in the line of duty while serving the United States military in the Global War on Terrorism.

Like the nearby Flight 93 Memorial Chapel, Patriot Park is privately-funded, relying on donations rather than the financial backing of the United States government.

Patriot Park will eventually feature the Gold Star Memorial Plaza at its heart, bearing the names of the Fallen on gold brick pavers.

But even now, the Field of Heroes Flag Display (a temporary placeholder until the Gold Star Plaza is built) is very moving and absolutely worth a visit before or after stopping at the Flight 93 National Memorial across the road.

How to Find Patriot Park Near Shanksville

Patriot Park is located just a half mile west of the entrance to the Flight 93 National Memorial, along Route 30 in Somerset County.

If navigating by GPS use 6150 Lincoln Highway Stoystown, Pennsylvania 15563 as the street address.

Viewing the Field of Heroes

The enormity of the loss of lives becomes all to clear as you gaze out over more than 7,000 flags representing those who died in the line of duty.

Various storyboards give more context to the sight before you.

And some of the storyboards put names and faces to the flags in a powerful way.

Located inside the northern boundary of Flight 93 National Memorial, Patriot Park is perfectly situated to honor those who served and died in the Global War on Terrorism since 9/11/2001.

I was fortunate enough to visit Patriot Park on the weekend of the dedication ceremony, where two travelling exhibits related to the Global War on Terrorism were invited to set up as well.

As with the Field of Heroes Flag Display, the enormity of loss really hits home when you see row after row of photos of those who died in the line of duty.

I was also fortunate enough to spend time talking with Brent Melton of the Global War on Terrorism History Project.

Brent is a Veteran, storyteller, and historian whose mission is to collect and save the uniforms and stories of those who served in the Global War on Terrorism.

Each helmet and uniform in his display literally had a story attached to it, and seeing these tangible mementos left a lasting impact in my mind.

Patriot Park is in the early stages of becoming home to a beautiful, permanent memorial to those military lives lost in the Global War on Terrorism.

You can help make that vision a reality by visiting Patriot Park in person, or by visiting their official website, and making a donation to this most worthy of causes.

The Flight 93 National Memorial is literally right across the road, its entrance located a half-mile east of Patriot Park on Route 30 (the Lincoln Highway).

The Flight 93 National Memorial is a tribute to the bravery, service, and sacrifice of the 40 passengers and crew members on board United Airlines Flight 93, who fought one of the first battles in the Global War on Terrorism in the skies over Pennsylvania.

The Flight 93 Memorial Chapel is another privately-funded tribute to the passengers and crew of Flight 93, this one situated approximately 3 miles west of Shanksville.

Opened on the first anniversary of 9/11, the Flight 93 Memorial Chapel houses an impressive display of donated memorabilia and tributes to the heroes of the Flight 93 story, and is a must-see when visiting the area.

The Glessner Covered Bridge is located less than 10 minutes from Patriot Park.

If you happen to be visiting the area in October, 20 Fabulous Fall Foliage Destinations in the Laurel Highlands will show you why this part of PA is consistently ranked one of the best places in the United States for experiencing spectacular autumn views!

The 28th Division Global War on Terrorism Monument, erected in 2016, is one of more than 30 monuments and memorials on the grounds of the Pennsylvania Military Museum.