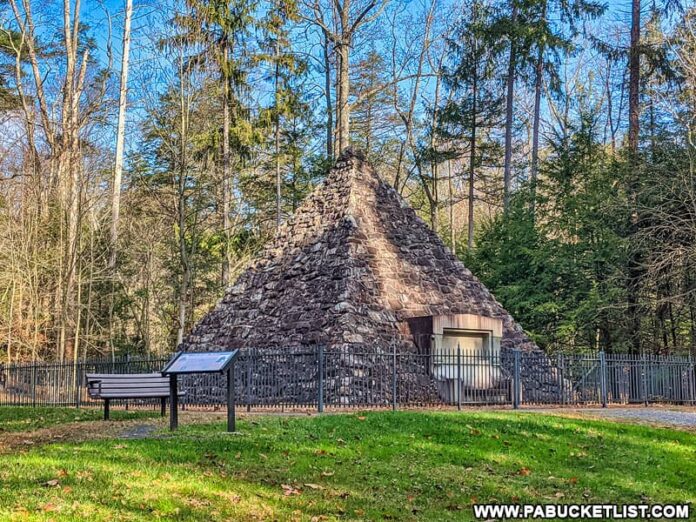 Buchanan’s Birthplace State Park is home to a large pyramid that marks the birthplace of the James Buchanan, 15th President of the United States.

Located near Cove Gap in Franklin County, this 18 acre park has 2 picnic pavilions and a few picnic tables, but the dominant feature is the 31 foot-tall pyramid that marks the spot where James Buchanan’s early childhood cabin once stood.

In 1789, James Buchanan’s father purchased Tom’s Trading Place, a busy trading post on what was then the western Pennsylvania frontier.

He renamed it Stony Batter, after the Buchanan family home in Ulster, Ireland.

James Buchanan was born at Stoney Batter in 1791, and he lived there until age 6 when his father bought a general store in nearby Mercersburg.

Buchanan graduated from Dickinson College in nearby Carlisle, became a lawyer, and eventually a politician.

He became President in the years leading up to the Civil War, was succeeded by Abraham Lincoln, and passed away at his home in Lancaster, PA in 1868.

The pyramid-shaped monument was funded by Buchanan’s niece Harriet Lane Johnston, and was constructed of local stone that was transported to the construction site by a temporary railroad.

Construction took 35 laborers two months to complete, and the project was finished on November 15, 1907.

These simple words inscribed on a granite tablet at the front of the monument are the only markings on the pyramid.

This historic site was donated to the state by the trust of Harriet Lane Johnston in 1911, becoming the first private land donation in Pennsylvania to be turned into a state park.

At the heart of this “park in the valley” lies 42-acre Cowans Gap Lake, built by the Civilian Conservation Corps in the mid 1930’s.

Big Mountain Overlook is one of the most impressive and most popular scenic overlooks in the Buchanan State Forest.

The Abandoned Pennsylvania Turnpike, quite possibly the most unique bike trail in all of Pennsylvania, spans portions of Bedford and Fulton counties.

The 7 Best Scenic Overlooks in the Buchanan State Forest is your guide to discovering the most sensational scenic vistas in Bedford, Fulton, and Franklin counties, along Pennsylvania’s southern border.

The Abandoned South Penn Railroad Aqueduct in Fulton County is a 140 year-old, perfectly-preserved remnant of a railroad that never was.