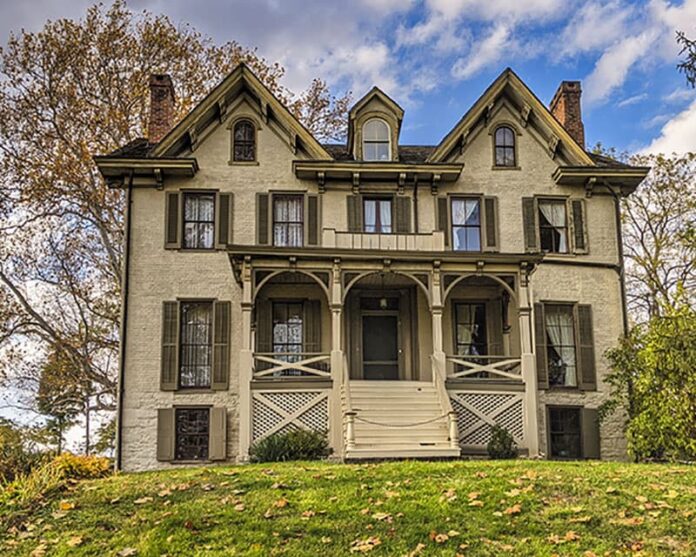 Centre Furnace Mansion in State College served as the home for a series of “iron masters” in the late 1700s through the mid 1800s.

It is also the birthplace of Farmers High School in 1855, a school that would grow into what is known today as Penn State University.

The remains of the iron furnace are a familiar scene to those who drive along East College Avenue when visiting State College and Penn State.

But the interior of Centre Furnace Mansion is the real gem here – a magnificently restored Victorian-style home with all the period-correct furnishings to complete the look.

And you can see the inside of the mansion yourself, by taking a tour with a guide from the Centre County Historical Society.

Free tours (donations suggested) are given from 1-4 p.m. on Sundays, Wednesdays and Fridays.

For the most up-to-date information on hours and any potential closures, please visit the Centre County Historical Society’s OFFICIAL WEBSITE for more details.

What You’ll See on the Tour

Tours begin in the basement, in what is now called the Hearth Room, which dates back to 1791 when the house was a simple log cabin.

Here you’ll learn about the first occupants of what would become Centre Furnace Mansion, as well as the iron-making process and the early history of Centre County.

The first floor of Centre Furnace Mansion has been restored and furnished to reflect the mid-to-late 1800s, when Moses Thompson and his family lived here, Moses being the last “iron master” before the furnace ceased operations.

The decorations, some of which are original to the home, pay homage to what life was like for an upper-class family in Centre County during this time period.

The kitchen at the back of the home is less opulent, but no less functional.

In September 1855, local dignitaries gathered at Centre Furnace Mansion to sign a document establishing a site for The Farmers High School of Pennsylvania.

The school’s intended purpose was to encourage the application of scientific methods to farming.

Moses Thompson and his partner/brother-in-law James Irvin offered the Pennsylvania Agricultural Society a donation of 200 acres of farmland near Centre Furnace to build the proposed school, with the option to purchase even more land at a discounted price.

The Agricultural Society accepted their offer, and the land agreement was signed in the east front parlor of Centre Furnace Mansion, now called the Founders Room.

The second floor of the mansion contains several bedrooms, decorated with period-correct furniture and accessories.

And some rather macabre artwork known as “hair art”, which apparently was quite popular in the 1860s-70s.

Before this tour I had no idea that making decorations out of a deceased relative’s hair was ever a “thing”, but apparently it was in the post-Civil War years.

Of course there are plenty of less-macabre decorations and accessories as well.

Of particular interest is a room containing a scale model version of Centre Furnace Mansion, an amazingly accurate miniature inside and out.

From the back of the mansion, you can see nearby Mount Nittany.

A focal point of the back yard is a massive sycamore tree, estimated to be several hundred years old.

In fact, this sycamore tree has been recognized as having been alive at the time Pennsylvania ratified the US Constitution in 1787!

For lovers of history and architecture, exploring Centre Furnace Mansion in State College is an absolute joy.

Significant for both its industrial heritage and as the birthplace of Penn State, a tour of Centre Furnace Mansion is definitely one of the “hidden gems” of things to do in Happy Valley, even if it is hidden in plain sight!

The Columbus Chapel in Boalsburg contains the largest and most important collection of Christopher Columbus artifacts and memorabilia on the North American continent!

Shaver’s Creek Environmental Center Near State College is home to an impressive aviary.

The Colyer Lake Trail near State College is a scenic and relatively flat 2.6 mile hike.