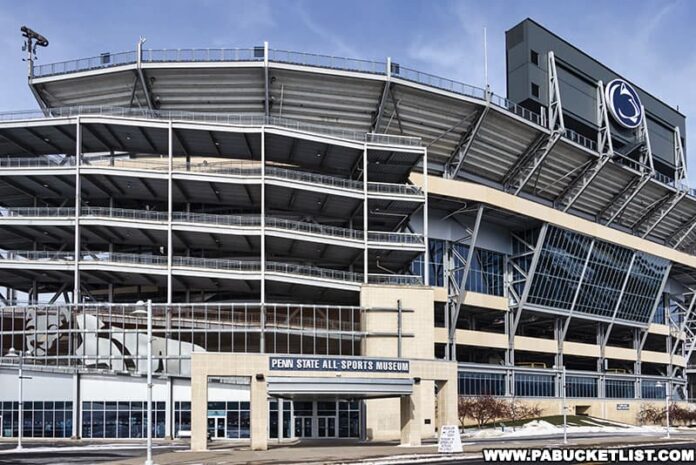 The museum features archival images and memorabilia from 34 sports played at the varsity level at Penn State, including 31 active sports and 3 that have been discontinued (boxing, bowling, and rifle).

Visitors will also learn about the history of the Nittany Lion, and how it came to be the Penn State mascot.

The upstairs portion of the museum focuses on the indoor sports played at Penn State, including basketball, wrestling, and ice hockey.

Sports that typically get less media attention, like fencing, get equal time here on the upper floor of the museum.

Each exhibit offers a wealth of information about that sport’s recent and historic accomplishments.

Trophies, jerseys, photos, and game balls are all part of this exhibit.

Throughout the museum you’ll find information related to the Nittany Lion and how it became the mascot of Penn State athletics and the University in general.

The idea for the Nittany Lion as the Penn State mascot is said to have been the brainchild of Penn State baseball player Joe Mason.

The Nittany Lion made its first public appearance as the Penn State mascot in 1922.

The Nittany Lion mascot has evolved a great deal over the past 100 years.

A version of the “modern day” Nittany Lion mascot costume is displayed in the museum as well.

Most visits to the Penn State All-Sports Museum include an opportunity to look into Beaver Stadium from the Mount Nittany Club Level, which depending on the time of year you visit, can look a LOT different than a typical game day!

Hours vary over the winter and on home football weekends – please check the museum’s OFFICIAL WEBSITE for the latest info.

The Museum is located at the southwest corner of Beaver Stadium, opposite the Bryce Jordan Center, along Curtin Road.

The suggested donation for admission is $5 for adults, $3 for children, seniors, & students.

The Arboretum is located 1 mile west of the All-Sports Museum, near the intersection of Park Avenue and Bigler Road, across the street from the Katz Law School Building.

Centre Furnace Mansion in State College is significant for both its industrial heritage and as the birthplace of Penn State.

You can take in all of State College and the Penn State main campus from the Mike Lynch Overlook on Mount Nittany, and I’ve created this comprehensive hiking guide to help you get there!

Visiting Penn State in the 1940s is a collection of family photos from the Penn State main campus between 1942-48, presented in then-and-now fashion.

The big draw at Shaver’s Creek is the recently-renovated Aviary, home to many Pennsylvania raptors including our Nation’s symbol, the bald eagle!

The Pennsylvania Military Museum  in neighboring Boalsburg honors the service of Pennsylvanians in all branches of the military, from colonial times to the present day.

Exploring the Ghost Town of Scotia Near State College offers visitors a chance to explore the ruins of a late 1800s iron-mining boomtown.

The 5 Best Scenic Overlooks Near State College will introduce you to some of the best vistas in Happy Valley!

The 6 Best State Parks Near State College is your guide to some of the best spots to seek temporary refuge from the hustle and bustle of life in a university town.