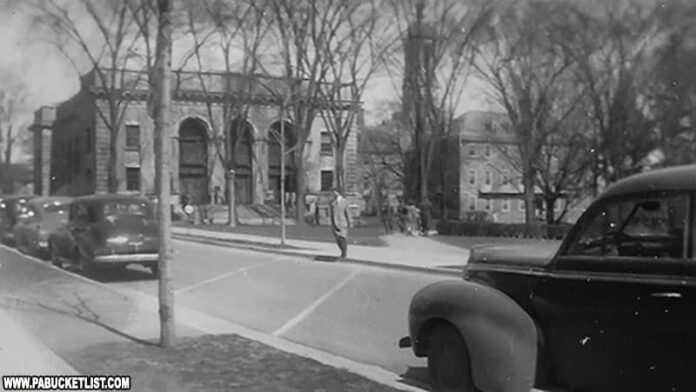 What did the Penn State main campus look like in the 1940s, and how do those same locations look in 2021?

Recently while going through an album of old family photos from Penn State in the 1940s, I decided it would be interesting to try to recreate some of those same scenes in 2021.

I took the current photos over Christmas Break in 2021, using Darl’s great-granddaughter (my daughter) as a model in some of the photos (full disclosure: both my wife and I are also Penn State alumni).

Some of the scenes from the 1940s look remarkably similar to today.

Old Main, for example, would be instantly recognizable to a time-traveler from the 1940s.

Whereas other structures are simply lost to history, like these beautiful barns.

Whether you’ve attended Penn State, are attending Penn State now, or simply enjoy watching history evolve, I hope you find these then-and-now photos of Penn State as much fun to look at as they were to try and recreate!

Schwab Auditorium in the 1940s.

Schwab Auditorium looking much the same in 2021.

The Mineral Sciences Building in the 1940s (check out those cars!).

McAllister Building in the 1940s.

Scenes That No Longer Exist at Penn State

The Armory once stood where Willard Building stands today.

Now a weathered historical marker is the only trace of this once-magnificent building.

If you look closely at the photo below, you can make out Schwab Auditorium to the left, and the tip of Old Main protruding behind the Armory.

In 2021, the Nittany Parking Deck and Kern Building occupy most of the land where New Beaver Field once stood.

An interesting side note about these photos Darl took at the football game – this was the Homecoming game versus Colgate in his freshman year of 1942.

And the Nittany Lion mascot was prowling the field.

The historical significance of this particular game is that the Lion Shrine was dedicated this homecoming weekend, having been carved from a 13-ton block of limestone over the summer months.

Since then, the Lion Shrine has gone on to become the second-most photographed spot in Pennsylvania (the Liberty Bell comes in at number one).

Windcrest Village was a complex of military-surplus trailers set up to house the huge influx of soldiers re-enrolling at Penn State following WWII.

Located where South Halls stand today, Penn State rented these trailers to married student veterans and their families for $25 a month.

Darl lived in one of these trailers for 2 years while earning dual degrees in mechanical and industrial engineering.

Some scenes at Penn State have changed considerably over the past 80 years.

Others have remained steadfastly similar.

As both a lover of history and a fellow Penn State alumnus, I owe a debt of gratitude to Darl for passing along his memories and these photos, allowing all of us to trace the evolution of Penn State from the 1940s to today.

Centre Furnace Mansion is significant for both its industrial heritage and as the birthplace of Penn State.

Hiking Mount Nittany Near State College is one of those “bucket list” items that every past and present Penn Stater aspires to do at least once in their life!

The Arboretum at Penn State is a fantastic collection of botanic gardens, fountains, ponds, walking trails, and pollinator habitats all located on the north end of the Penn State University Park campus.