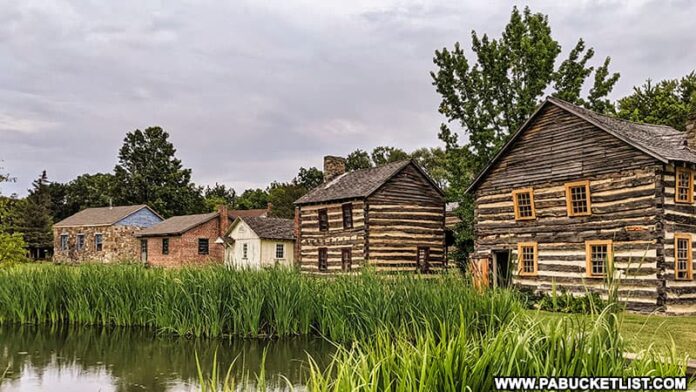 Like any good museum, there is a visitor center and a gift shop, but the bulk of your visit to Old Bedford Village will be spent touring the 40-plus buildings that make up this replica of a western PA frontier village.

In addition to the permanent exhibits at Old Bedford Village, the site plays host to a number of special events throughout the year, and you’ll see those listed on the schedule below.

The land on which Old Bedford Village sits today was once occupied by a Monongahela village, sometime between 1250 and 1600 A.D.

Today the Shoop House at Old Bedford Village houses an impressive collection of artifacts and exhibits related to those Native Americans who once called this land home.

A diorama on display in the Shoop House shows what archaeologists believe the village looked like.

The History of Old Bedford Village

Construction of Old Bedford Village began in 1974, to promote the area’s rich historic heritage and in preparation for America’s Bicentennial in 1976.

Many of the buildings at Old Bedford Village are in fact authentically old – they were disassembled elsewhere in the county are reassembled on new lots at the museum.

The Eight-Square School, for example, was built in Bedford County in 1851, and utilized this unique shape to allow for equal distribution of light and heat.

The Claycomb Covered Bridge was built elsewhere in the county in 1844, and was later dismantled and relocated to Old Bedford Village, where it now serves as the entrance to the property.

Christ Church at Old Bedford Village is a modern reproduction, inspired by the still-standing 1806 Old Log Church a few miles to the west.

Even on the frontier, the church was an important part of life, and Christ Church is a beautiful example of how places of worship from that era would have looked, with a few modern exceptions such as ceiling fans and carpet.

As a living history museum, many artisans occupy various shops around the village, demonstrating their trades and wares.

Gunsmiths, blacksmiths, tinsmiths, and candlemakers are just a few of the artisans you can watch, and in some cases, buy their finished products.

Some of the shops allow you to try your own hand at these frontier skills, like the tinsmith shop, which may or may not win you the admiration of your kids.

Speaking of kids, you can show them what school was like before iPads and Zoom classes.

Aside from arts and crafts shops, you can see what a typical frontier home looked like at Old Bedford Village.

Livestock was important to survival on the frontier, and a number of farm animals call Old Bedford Village home.

Taverns were another important part of frontier life, especially for travelers, and the Pendergrass Tavern at Old Bedford Village is a realistic reproduction of a mid-1700s establishment.

In a non-COVID year, you can enjoy soup, sandwiches, and non-alcoholic drinks at the Pendergrass Tavern.

Old Bedford Village is a great place to spend a day learning about life in western PA during the times of the first European settlers in the region.

And if you have kids, they’ll love it as well – trust me!

They are NORMALLY open Memorial Day through October 31st, Thursday-Sunday from 9-5, but in the age of COVID, it would be prudent to call ahead to confirm those days/times.

Located right along Route 30 (AKA the Lincoln Highway) just west of Bedford, it is visited by thousands of people from around the globe every year.

19 Must-See Destinations in Bedford County will show you even more great places to visit near Old Bedford Village.