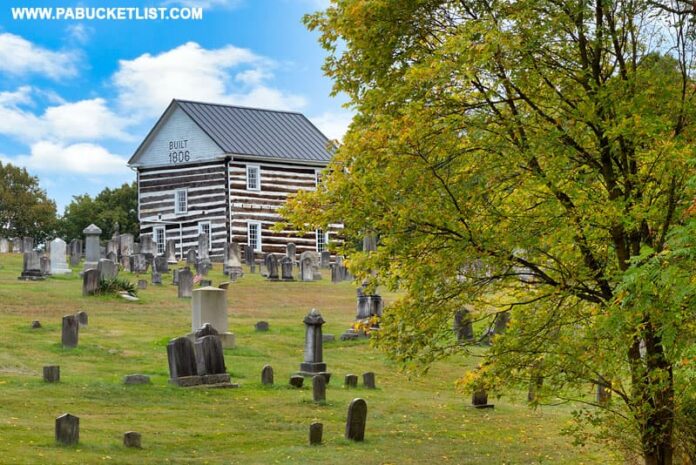 The 1806 Old Log Church is the oldest standing church in Bedford County, Pennsylvania.

Located right along Route 30, AKA the Lincoln Highway, it is visited by thousands of people from around the globe every year. 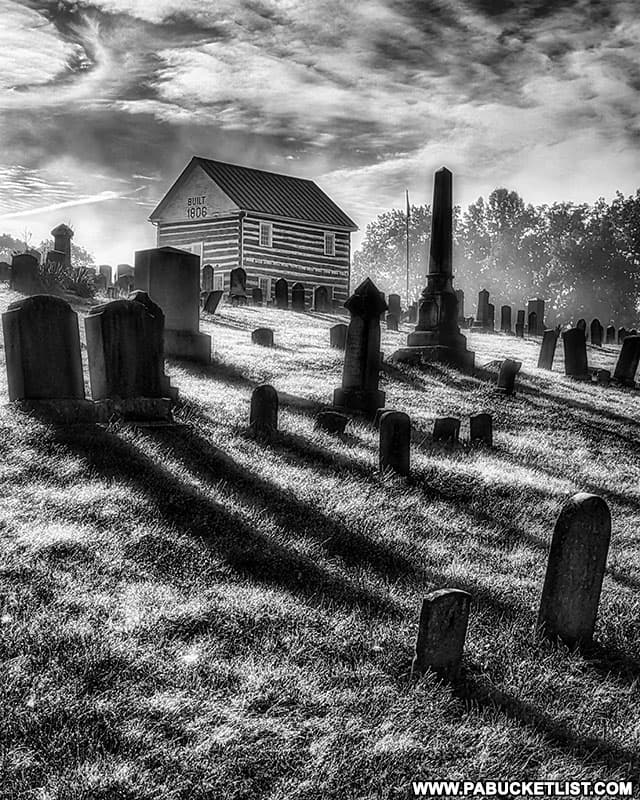 The church was originally called the Union Church, as it served both the local Lutheran and Reformed congregations. 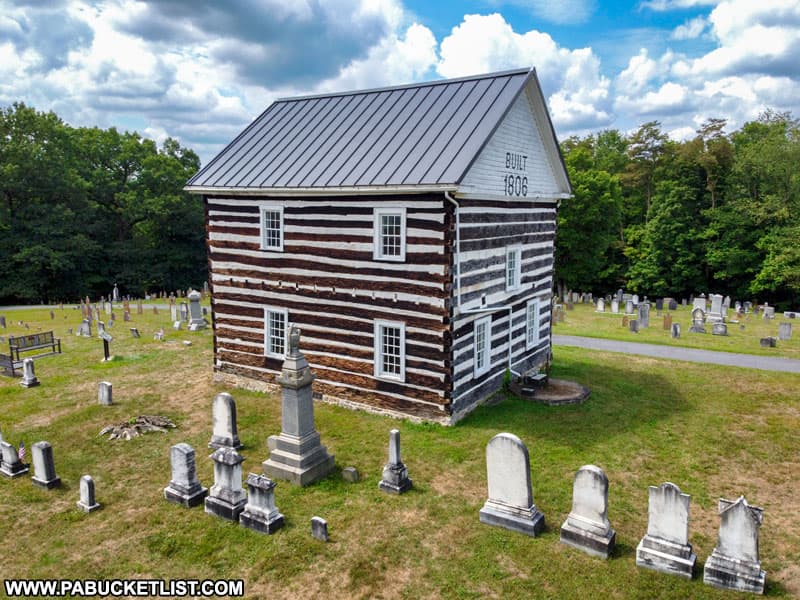 Yes – use GPS coordinates 40.04849, -78.65555 to find the church along what is now called Cemetery Road (the original route of the Lincoln Highway).
If you prefer to navigate by physical street address use 343 Cemetery Rd, Schellsburg, PA 15559. 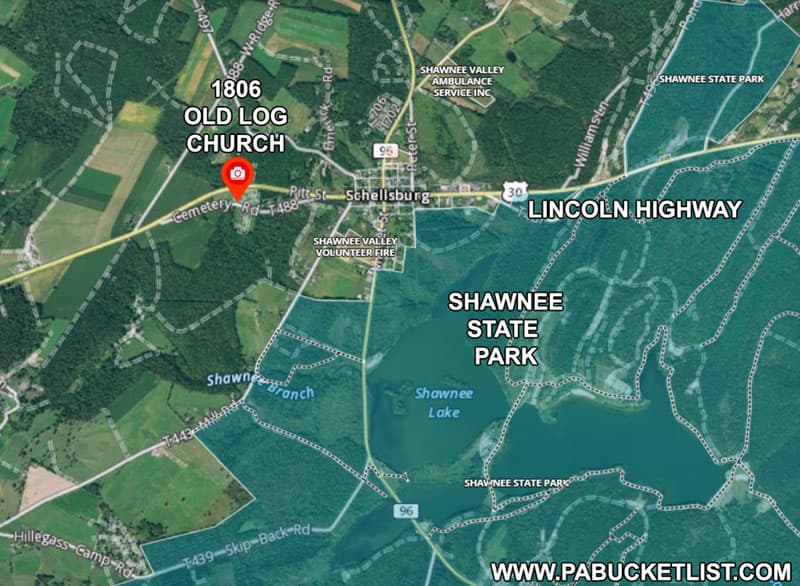 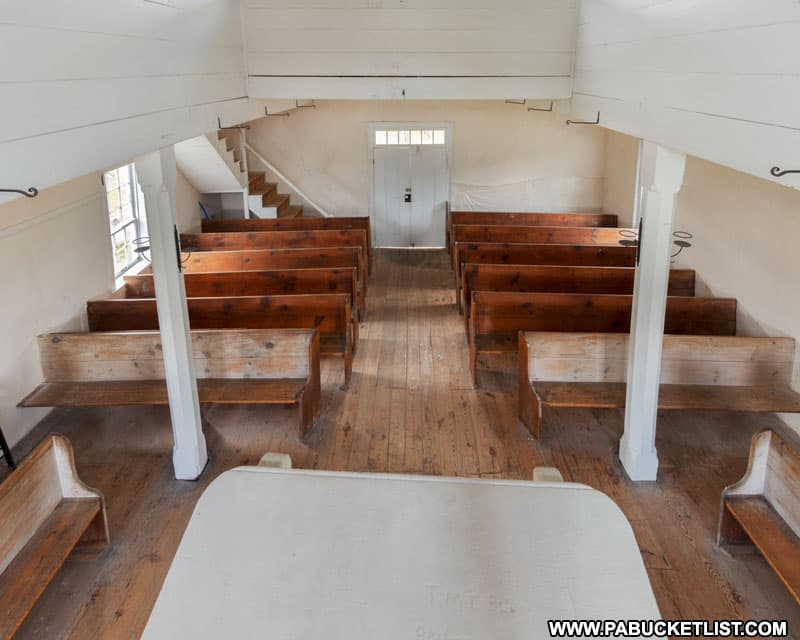 What is the unique shape of the pulpit called?

The pulpit in the 1806 Old Log Church is called a “wine glass pulpit”, as it resembles that type of drinking vessel.
It was added to the church in 1812. 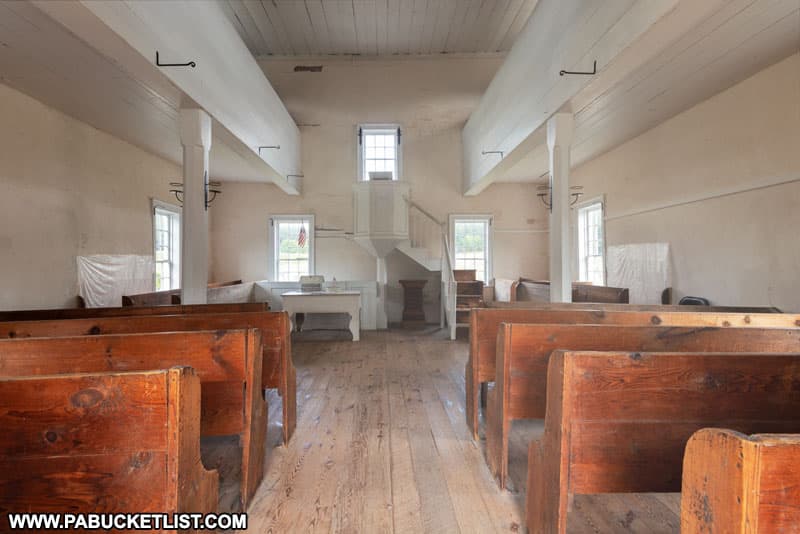 When were the galleries in the 1806 Old Log Church constructed?

The galleries that surround 3 sides of the second story of the church were constructed in 1814. 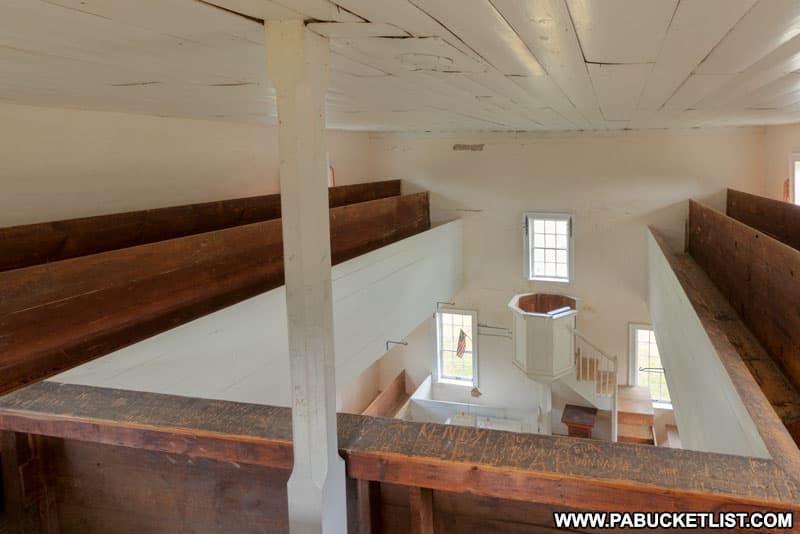 When were the interior walls of the 1806 Old Log Church plastered?

The interior walls were plastered around 1820. 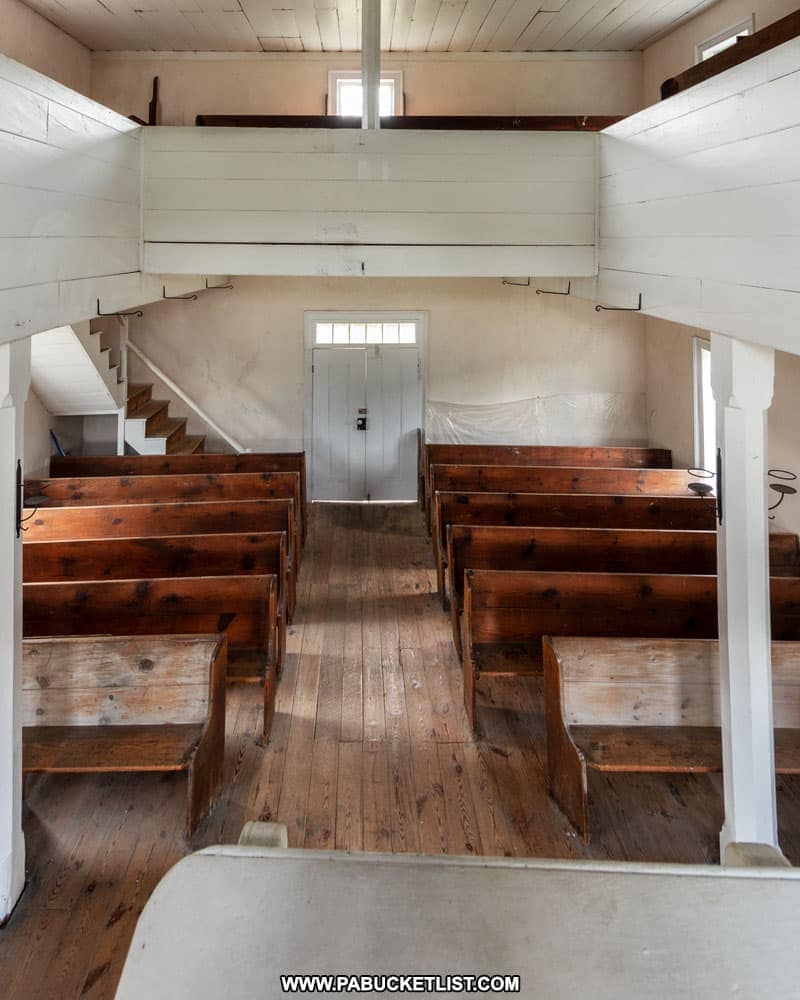 When was the 1806 Old Log Church last used for regular services? 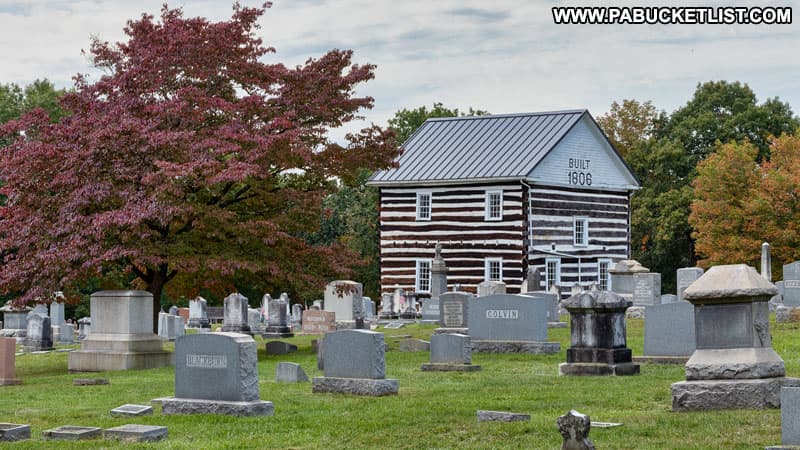 Why does the exterior of the 1806 Old Log Church look white in some old pictures?

At one time the outside of the church was covered with white weather board, but in 1935 the weather boarding was removed. So any images/postcards (see below) showing the 1806 Old Log Church looking white are from before 1935. 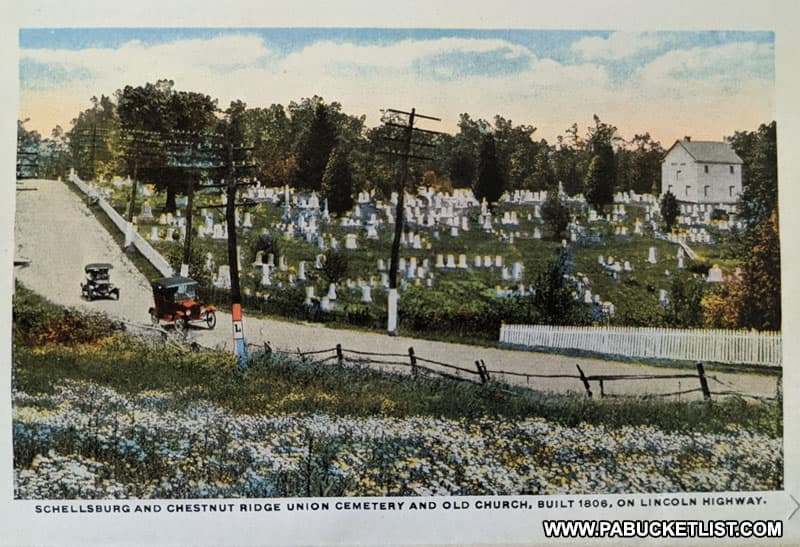 What are the visiting hours at the 1806 Old Log Church?

In a typical (non-COVID) year, the church is unlocked during daylight hours every day between Memorial Day and Labor Day. There is no electricity or plumbing in the church (so no restrooms). There is a guest book and donation box at the front of the church. 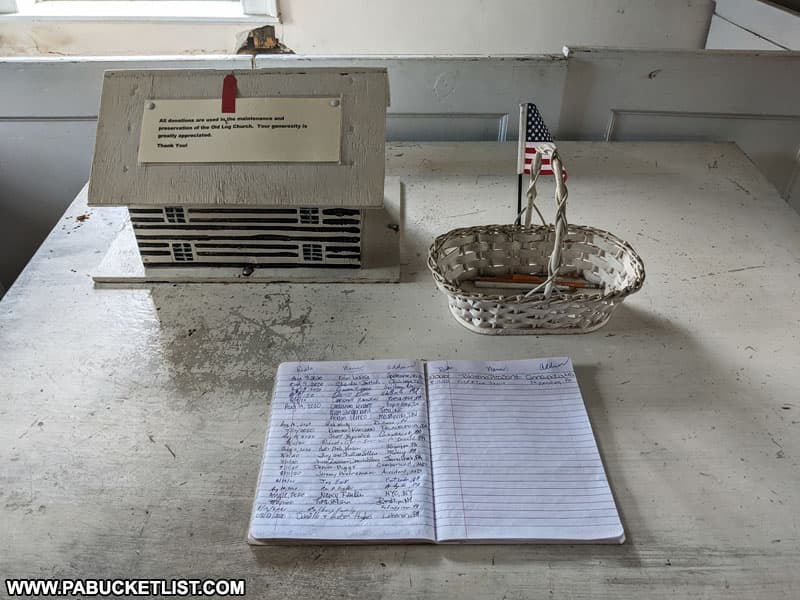 What are the fall hours at the 1806 Old Log Church?

The church is open on weekends only in October, through October 24th. 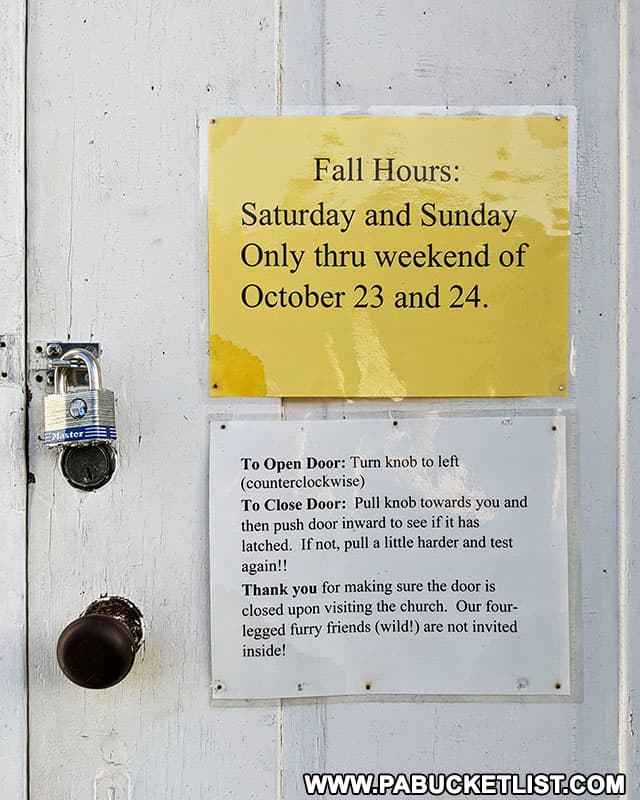 Is the 1806 Old Log Church staffed by a tour guide?

No – this is a self-guided attraction, although there is an informative sign outside the entrance to the church. 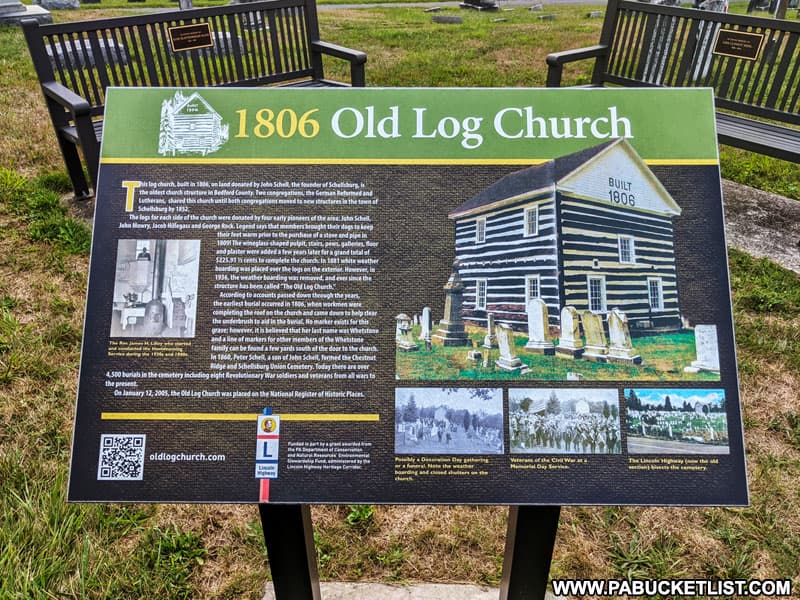 The Chestnut Ridge and Schellsburg Union Cemetery that surrounds the 1806 Old Log Church is the final resting place for many prominent local citizens as well as soldiers from all of America’s wars.

Perhaps no grave in the cemetery is more well-known than that of William Hinson, who also happens to be my great, great, great grandfather.

He was captured at Vicksburg in October 1863 and sent to a Union prison camp at Fort Alton, Illinois in November 1863. He was being transferred to a prison camp in Delaware via train in February 1864 when he escaped somewhere in the mountains of Cambria County, PA. He wandered into Somerset County and was given shelter from the winter cold by a Quaker family.

Knowing that authorities may search for him, he changed his name to William Hinson (his maternal grandfather’s name) and settled down in Pennsylvania to wait out the war.

But instead of returning to Mississippi, he started a new life in Pennsylvania. He settled near Schellsburg, where he became a pillar of the community. He married a local girl (Catharine), had children (including my great, great grandmother Emma Hinson), and was a Justice of the Peace in Bedford County for many years. When he died in 1925, his Confederate Army service was revealed and he was buried under both flags.

The story of William Hinson / Oliver Niley has been told in many Civil War publications, including Civil War Times.

One look at the guest book inside the 1806 Old Log Church and you’ll quickly realize that people from literally all over the world stop here out of sheer curiosity, or to pray, or to pay their respects to a deceased family member.

One look at some of the carvings in the upper pews inside the church and you’ll see that bored and restless kids sitting through a Sunday service is not a new phenomenon!

The relative rarity of the wine glass pulpit certainly makes the interior of this old church memorable.

As does the overall austere/no-frills nature of the church in general.

For those looking to retrace the route of the original Lincoln Highway, you’ll pass right through the Chestnut Ridge and Schellsburg Union Cemetery along what is now called Cemetery Road.

And while the 1806 Old Log Church is no longer in regular use, please treat both it and cemetery with the respect they deserve.

No matter the season, the 1806 Old Log Church in Bedford County is a beautiful sight to behold!

The Saint Severin Old Log Church in Clearfield County is another fine example of a 19th century Pennsylvania log church.

The Middle Ridge UMC Church outside Wellsboro, AKA “The Little Red Church”, is a beautiful house of worship built in 1897 and still in use in Tioga County.

The Bedford Coffee Pot is located just a few miles east of the 1806 Old Log Church along the Lincoln Highway, on the outskirts of Bedford.

The Fort Bedford Museum explains the history of Bedford County on the site of a British fort originally built in 1758.

The Abandoned Pennsylvania Turnpike near Breezewood (Bedford County) is a superhighway-turned-bikepath that feels like you’ve stepped into a sci-fi movie!

The Grand View Ship Hotel in Bedford County was, in its prime, one of the most famous attractions along the Lincoln Highway.

19 Must-See Destinations in Bedford County will show you even more great places to visit near the 1806 Old Log Church.

The Flight 93 National Memorial is located approximately 30 minutes west of the 1806 Old Log Church, also along the Lincoln Highway.

If you enjoy all things Lincoln Highway, be sure to check out the Lincoln Highway Experience near Latrobe, a museum dedicated to telling the story of the first transcontinental automobile route linking the east and west coasts of the United States.