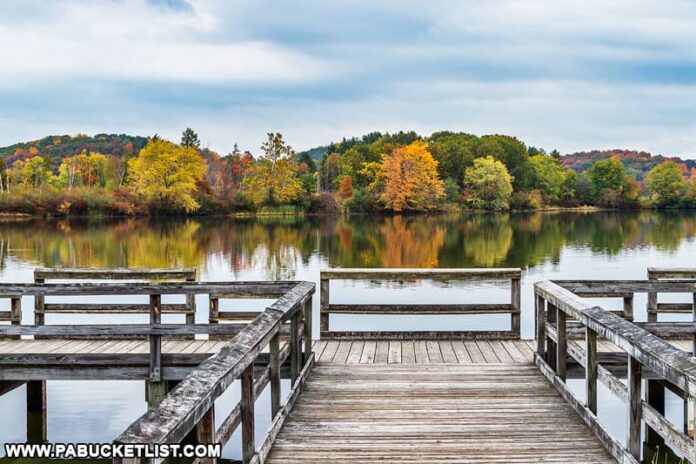 Shawnee State Park opened to the public in 1951, and has been a magnet for tourists ever since!

On the map below, you can see that Shawnee Lake almost looks like three separate bodies of water, connected by small channels.

Around the perimeter of the lake, you find a variety of hiking trails, picnic areas, and a myriad of other things to do.

Fishing is without a doubt one of the most popular pastimes at Shawnee State Park.

Just about every warm water species of fish you can think of is stocked in Lake Shawnee, including smallmouth bass, largemouth bass, northern pike, walleye, muskellunge, pickerel, catfish, crappie, yellow perch, and bluegill.

Kayaking is one of my personal favorite activities at Shawnee State Park.

If you don’t have your own, there is a boat rental open between Memorial Day and Labor Day near the East Beach.

The beach and swimming area are open between Memorial Day and Labor Day, and this is a non-guarded beach so swim at your own risk.

There is a concessions area and changing rooms right behind the beach.

There are 16 miles of trails at Shawnee State Park, with the 3.4 mile Lake Shore Loop Trail being the most popular, in my experiences there.

You can pick up a trail map at any of the kiosks scattered around the park, or at the park office itself.

Shawnee Lake serves as a stopping point for various migratory birds in the spring and fall.

Aside from wildlife photography, Shawnee State Park is a great spot for sunrise photography.

Moonlit nights in the late summer and early fall are also exceptional photo-ops.

Shawnee State Park has a lakeside disc golf course, for those who partake in this particular sport.

The reflections of fall foliage on Shawnee Lake are certainly one of the highlights of October in Bedford County.

There are so many good vantage points to view the fall foliage from here, I’d need to write a book to list them all!

But certainly if you’re visiting Bedford County for the annual Fall Foliage Festival in downtown Bedford, make sure to take a side-trip to Shawnee State Park as well.

How to Find Shawnee State Park

If navigating by GPS, use 132 State Park Road Schellsburg, PA 15559 to find the park office.

Located right along Route 30 (AKA the Lincoln Highway) less than 5 minutes from Shawnee State Park, it is visited by thousands of people from around the globe every year.

22 Must-See Destinations in Bedford County will show you even more great places to visit near Shawnee State Park.