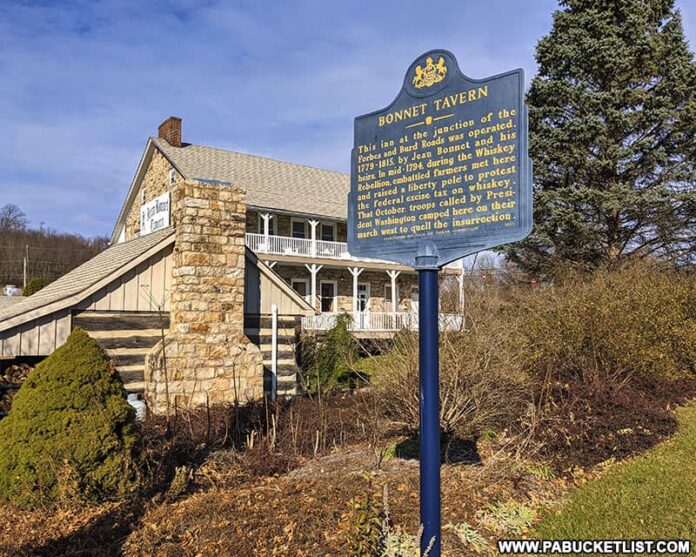 Located at the intersection of Routes 30 and 31, the Jean Bonnet Tavern has stood at this historic fork in the road since 1762.

The path of present-day Route 30 follows what was known at the time of its construction as Forbes Road, built in the late 1750s on orders from British General John Forbes as part of his plan to move troops and supplies westward across the Allegheny Mountains, to capture Fort Duquesne from the French.

Forbes Road extended from Fort Bedford, a few miles east of the Jean Bonnet Tavern, to Fort Ligonier in present day Westmoreland County, and eventually to Fort Duquesne, which ultimately WAS captured by General Forbes, renamed Fort Pitt, and is now known as Pittsburgh.

Forbes Road was the only east-west route between eastern PA and the “Ohio Country” at the time, so countless soldiers, settlers, and travellers of all kinds passed by and through the doors of the Jean Bonnet Tavern in those colonial days.

Apparently some of those travelers liked it so much, they never left!

Even the first President of the United States has historical ties to the Jean Bonnet Tavern.

The Jean Bonnet Tavern and the Lincoln Highway

In the 1920s, the Lincoln Highway became the first transcontinental automobile route linking the east and west coasts of the United States.

The Pennsylvania portion of the Lincoln Highway was built over top of the old Forbes Road, creating a new generation of travellers who would stop off at the Jean Bonnet Tavern for food, drinks, and lodging.

How to Find the Jean Bonnet Tavern

The tavern is equidistant from downtown Bedford to the east and Shawnee State Park to the west, so it makes a terrific spot for lunch or dinner when exploring the many other other historical sites in Bedford County.

Dining at the Tavern

Having grown up in neighboring Somerset County, I’ve dined at the Jean Bonnet Tavern countless times, and always found the food and service to be first rate.

The ambiance is colonial American, from the furnishings to the decorations.

Meals are served with period-correct looking plates and silverware.

Even the placemats offer up a history lesson while you wait for your food to come out.

The Ghost Book at the Jean Bonnet Tavern

The one thing you MUST do when dining at the Jean Bonnet Tavern is ask to see the “ghost book”, which chronicles some of the reported hauntings, apparitions, and other paranormal activities observed here over the years.

In all my years of dining here, I’ve never personally experienced anything I’d consider “paranormal”, but I do try to keep an open mind to the possibilities.

As you read through the ghost book, you’ll discover that hangings have taken place at the Jean Bonnet Tavern, and at least one skeleton was discovered buried beneath the floorboards, so certainly all the elements are in place for a good ghost story, if nothing else!

This is also where you buy the goat feed (more on that next).

No trip to the Jean Bonnet Tavern is complete (at least not in my family) without feeding the goats who live next to the tavern!

For the health and safety of the animals, you should ONLY feed them goat feed from the Cabin Shoppe, which is very reasonably priced at $1.00 for a decent-sized bag.

If you love historic architecture, a good ghost story, and great food, it’s hard to beat the Jean Bonnet Tavern in Bedford County.

Personally, I love the idea of sitting down for a meal next to a fireplace where someone else did the same thing 260 years ago!

And YOU become part of that 260 year legacy when you dine at the tavern.

As for the ghosts, I’ve yet to see one, but there’s always next time!

Dunkle’s Gulf Station along the Lincoln Highway in Bedford is a throwback to the early days of American automobile transportation, and is still in operation to this day!

The Bedford Coffee Pot is a unique 18 foot-tall “novelty structure” built along the Lincoln Highway near downtown Bedford.

The 1806 Old Log Church is the oldest standing church in Bedford County, and lies a few miles west of the Jean Bonnet Tavern along the Lincoln Highway.

The Abandoned PA Turnpike is a popular hiking/biking trail, featuring two lengthy tunnels and a trailhead near Breezewood in Bedford County.