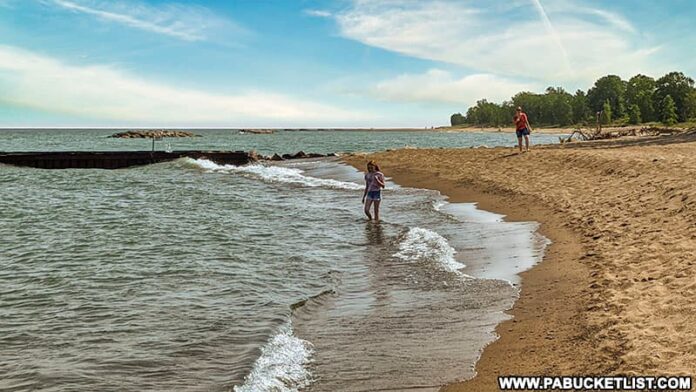 Presque Isle State Park in Erie is Pennsylvania’s most-visited State Park, with over 4 million people a year venturing onto this sandy peninsula that arcs out into Lake Erie.

There are plenty of reasons why so many people have flocked to this 3,200-acre “PA seashore,” rich in both historical significance and recreational opportunities, for so many years.

And what I’d like to share with you here are 10 of the best things to see and do at Presque Isle State Park, to help kick-start your own exploration of this Natural National Landmark that has drawn people to the shores of Lake Erie long before Europeans ever stepped foot on the North American continent.

10 Best Things to Do at Presque Isle State Park

This 65,000 square-foot facility introduces visitors to the unique history of Presque Isle, as well as educates them on the diverse ecosystems and wildlife they may encounter at Presque Isle State Park.

Aside from 2 floors of historical exhibits and educational displays, there is a 75-foot observation tower you can climb (or take an elevator to the top of) to get a nice panoramic view of Lake Erie and the surrounding countryside.

Presque Isle State Park is home to miles of sandy beaches along the shores of Lake Erie.

Some of the beaches are guarded and permit swimming, other are more natural (and less crowded) and permit only sunbathing and walking on the water’s edge.

The Presque Isle Lighthouse is open for tours during the summer months 7 days a week, from 10 a.m. to 5 p.m.

Getting to the top of this 57 foot-tall structure does involve climbing 78 steps along a circular staircase.

The reward, however, is a panoramic view of Lake Erie, as well as an up-close look at the modern LED light that replaced the original lamp and Fresnel Lens.

Another great vantage point is the beach area between the lighthouse and Lake Erie.

From the beach you’ll see the Presque Isle Lighthouse as mariners have been seeing it since 1873.

While the interior of the North Pier Lighthouse is not open to visitors, you can still walk right up to this impressive and nautically-important structure that marks the entrance to Presque Isle Bay and the Erie Harbor.

Built in 1858, the squarish design of the North Pier Lighthouse at Presque Isle State Park is unlike any surviving lighthouse in the United States.

Exploring Presque Isle State Park and Lake Erie by boat (more about that in a minute) gives you another chance at a unique view of the North Pier Lighthouse.

The Perry Monument is located along Misery Bay at Presque Isle State Park.

This 80-foot limestone monument and surrounding interpretive displays commemorate Commodore Perry’s actions in the Battle of Lake Erie during the War of 1812.

One of the more unique experiences you can have at Presque Isle State Park is touring the coastline of the park and exploring Lake Erie and Presque Isle Bay by boat.

Departing from Misery Bay (right next to the Perry Monument), the Lady Kate is a 65-foot vessel that takes you on a 14 mile, 90 minute tour that ventures out onto the open waters of Lake Erie and Presque Isle Bay.

Seeing both the park and the Erie shoreline by boat gives you a unique perspective on the area.

For more information on booking a tour aboard the Lady Kate, visit the Presque Isle Boat Tours official website.

Presque Isle State Park is home to 11 miles of hiking trails (not including the Karl Boyes Trail mentioned above).

Like the Peninsula itself, the hiking trails are basically flat, and I’d strongly recommend you bring along insect repellent as well.

Fishing is an extremely big draw to both Presque Isle State Park and the Erie area in general.

Of all the ways you can spend your time at Presque Isle State Park, perhaps none is more relaxing than simply sitting on the beach and watching the huge variety of boats that pass by on a daily basis.

Presque Isle Bay gets particularly active around sunset, when both private and charter boats position themselves to watch the sun slip below the Lake Erie horizon.

A number of these charter boats offer sunset cruises as well, so not only can you watch other boats, but you can catch the sunsets Presque Isle State Park is famous for.

The North Pier is another great place for boat watching, as it is essentially the mouth of Presque Isle Bay and the Port of Erie, where all the boat traffic in and out must pass by.

This sliver of land known today as Presque Isle State Park, jutting out into Lake Erie, is sure to become a favorite PA state park of yours, if it isn’t already!

Taking the Lady Kate Boat Tour at Presque Isle State Park provides you with an in-depth look at one of the best sightseeing tours in Erie.

Exploring the Historic Lighthouses of Erie, PA takes you on a detailed tour of all three nautical landmarks, with maps, photos, historical accounts, and driving directions.

The Sherman Memorial Lighthouse in Forest County serves no navigational purpose, but at 75 feet tall, it’s the tallest functional lighthouse in Pennsylvania!

Discover more of Pennsylvania’s best state parks, from all corners of the Keystone State, on the PA State Parks section of PABucketlist.com!