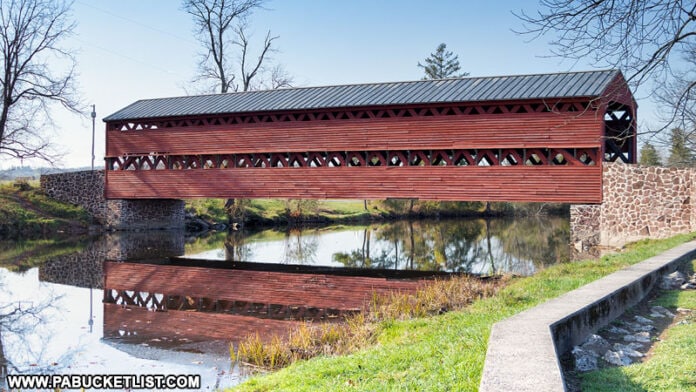 The bridge is closed to vehicular traffic (but open to pedestrians), and there is parking at either end of the bridge.

A wheelchair-accessible ramp is located next to the parking area on the northern end of the bridge, at GPS coordinates 39.79756, -77.27577, where Waterworks Road dead-ends at the bridge.

Sachs Covered Bridge During the Battle of Gettysburg

Three days later, retreating Confederate forces also crossed Sachs Covered Bridge, which in no small part is why the PA Department of Highways (PennDOT’s predecessor) designated it “Pennsylvania’s most historic covered bridge” in 1938.

It utilizes an interesting construction technique known as a Town Lattice truss, named after its designer Ithiel Town.

In a Town Lattice truss bridge, wooden beams are criss crossed to form a lattice which gives the bridge its structural integrity.

Sachs Covered Bridge was closed to vehicular traffic in 1968, and placed on the National Register of Historic Places in 1980.

Sachs Covered Bridge was damaged by flood waters in June 1996, repaired, and rededicated in July 1997.

Because it lies so close to the battlefields of Gettysburg, it is rumored to be haunted and is a popular spot for modern-day “ghost hunters”.

The Soldiers’ National Cemetery in Gettysburg is the final resting place for more than 3,500 Union soldiers killed in the Battle of Gettysburg, as well as American veterans of subsequent wars.

At its dedication in November of 1863, President Abraham Lincoln gave a 2-minute speech which is now considered one of the most iconic in American history, the Gettysburg Address.