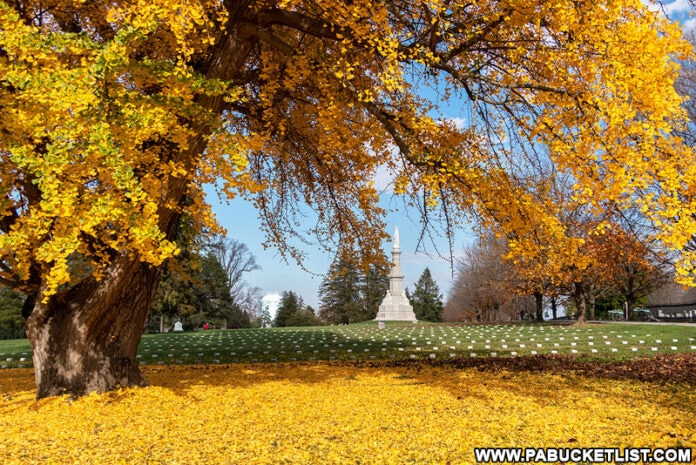 The Soldiers’ National Cemetery in Gettysburg is some of the most historic and hallowed ground in Pennsylvania.

Cemetery Hill, near the site from which Union forces repelled Pickett’s Charge on Cemetery Ridge, was in the months after the Battle of Gettysburg transformed into the final resting place for over 3,000 fallen Union soldiers.

At a ceremony dedicating the newly-created cemetery on November 19, 1863 (4 months after the Battle of Gettysburg), President Abraham Lincoln delivered what is considered to be one of the most iconic speeches in American history, what later became known as the “Gettysburg Address”.

So what does the Soldiers’ National Cemetery in Gettysburg look like today, and what can you expect to see if you visit?

Follow along as I share with you a brief history and description of this hallowed ground, consecrated by “the brave men, living and dead, who struggled here”, as President Lincoln put it.

Construction of the Soldiers’ National Cemetery

On July 1-3, 1863 nearly 165,000 soldiers from the Union and Confederate armies fought fiercely at Gettysburg, leading to more than 7,000 combined deaths on both sides.

After the battle, bodies were scattered across the countryside.

Fearing an epidemic and trying to do the honorable thing for the fallen, the dead were buried in hastily-dug graves, but wind and summer rains removed the soil covering many of the shallow plots, exposing the bodies to the elements.

Touring Gettysburg soon after the battle, Governor Andrew Curtin was so disturbed with what he saw that he and local leaders decided the state should step in and fund the construction of a proper cemetery for the Union dead at Gettysburg.

Landscape architect William Saunders was hired to design the cemetery, and his plan called for the dead to be buried in semi-circular rows arranged by state.

At the central hub of the semicircle would be Soldiers’ National Monument, begun in 1865 and dedicated on July 1, 1869.

The reburials in the new cemetery began in late October 1863, nearly 4 months after the battle.

The work was far from done when the cemetery was dedicated on November 19, 1863.

The keynote speaker for the dedication ceremony was Massachusetts statesman Edward Everett, who spoke for nearly 2 hours.

After a brief musical interlude, it was President Lincoln’s turn.

His now-famous 2 minute speech not only honored the fallen soldiers, but called for a renewed sense of purpose in preserving the Union, “that these dead shall not have died in vain“.

The President attended a church service after the dedication ceremony, and then returned to Washington by train.

The Lincoln Address Memorial (dedicated in 1912), which now stands near the southern gate of the Soldiers’ National Cemetery, is the only monument in the United States dedicated to a speech and not the person who gave it.

The Soldiers’ National Cemetery was turned over to the Federal Government in 1872, and transferred to the National Park Service in 1933.

It cannot be overstated that this is a cemetery, not a theme park, and visitors should act in a dignified manner when visiting.

The original Union gravesites fan out in a semicircular fashion from the base of the Soldiers National Monument.

The Genius of Liberty stands atop the Soldiers’ National Monument, sword in one hand and wreath of peace in the other, representing the competing costs of freedom.

Numerous other monuments are scattered about the cemetery in honor of the various Union artillery batteries that defended key positions on Cemetery Hill during the 3-day battle.

Between 1898 and 1968 additional sections were added to the cemetery to accommodate the graves of veterans from the Spanish-American War, both World Wars, the Korean War, and the Vietnam War.

A rostrum (raised stage) was constructed in 1879, and has been the site of speeches by Presidents’ Theodore Roosevelt, William Taft, Calvin Coolidge, Herbert Hoover, and Franklin D. Rooselevlt.

Near the North Gate of the cemetery is the only statue in the Soldiers’ National Cemetery dedicated to an individual, that being Major General John F. Reynolds, the highest-ranking officer killed at Gettysburg.

This was the first bronze statue at Gettysburg (cast from 4 bronze cannon barrels, thought to be from Confederate guns), and was dedicated in 1872.

The concept of “peace with honor” is conveyed in this American Legion plaque.

In the letter inviting President Lincoln to attend the dedication of the Soldiers’ National Cemetery, it was written “It will be a source of great gratification to the many widows and orphans that have been made almost friendless by the great battle here to have you here personally, and it will kindle anew in the breasts of the comrades of these brave dead who are now in the tented field that they who sleep in death on the battlefield are not forgotten by those highest in authority and they will feel that should their fate be the same their remains will not be uncared for.“

When I look closely at this photo I took on my last visit to Gettysburg (November 2020), I can’t help but think that the brave dead indeed “are not forgotten by those in the highest authority”.

Sachs Covered Bridge near Gettysburg was crossed by both Union AND Confederate troops during the Battle of Gettysburg.

Because of that, the State designated this “Pennsylvania’s most historic covered bridge” in 1938.

Exploring an Abandoned POW Camp in Cumberland County will show you how to find a secret POW camp set up by the U.S. military during World War Two to house German and Japanese prisoners in a remote section of the Michaux State Forest.

The Flight 93 National Memorial pays tribute to the bravery, service, and sacrifice of those 40 passengers and crew members.