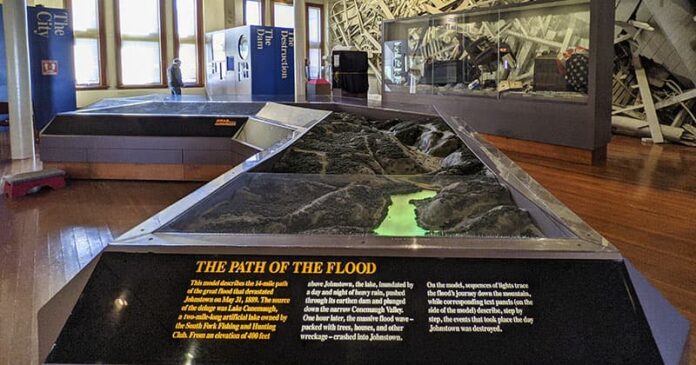 The Johnstown Flood Museum, located in downtown Johnstown, tells the story of the tragic May 31, 1889 flood that killed over 2,200 people and captured the attention of the entire world.

Through a mixture of interpretive exhibits, surviving artifacts, photographs, and an award-winning film, visitors to the Johnstown Flood Museum can get a sense not only of the causes of the flood and the devastation in wreaked, but of the recovery and rebuilding efforts as well.

What Caused the Johnstown Flood of 1889

Periodic flooding was a fact of life in Johnstown, as it was built on a flood plain at the confluence of the Little Conemaugh and the Stony Creek Rivers.

But in the spring of 1889, a wetter-than-normal-spring, a powerful rainstorm, and a neglected dam 14 miles upstream from Johnstown proved to be a recipe for disaster.

The South Fork Fishing and Hunting Club, a private club made up of wealthy and powerful Pittsburgh businessmen such as Andrew Carnegie and Henry Clay Frick, had purchased the damaged Western Reservoir in 1879, and haphazardly repaired the dam to create their own private lake (which they renamed Lake Conemaugh) for fishing, boating, and swimming.

During the 10 years the club owned Lake Conemaugh, they made several dangerous modifications to the dam, including lowering and widening the breast of the dam several feet (to allow their carriages to pass on the road across the dam), and installing screens across the spillway (to keep prized game fish from escaping the lake).

When the heavy rains came on May 30th and 31st, 1889, the spillway simply couldn’t keep up, water crested the breast of the dam, and at 3:10 pm the dam gave way, unleashing 20 million tons of water on the unsuspecting communities downstream.

Destruction Caused by the Flood

The wall of water unleashed when the dam at Lake Conemaugh burst was estimated to be at least 40 feet tall, and it leveled not only large parts of Johnstown, but numerous small communities along the Little Conemaugh River as well.

In the end, over 2.200 people were killed or presumed killed (some bodies were never found).

Johnstown’s Grandview Cemetery on Yoder Hill became the final resting place for a large number of the flood victims, and includes 777 white stone markers in a plot for the unknown/unidentified.

In the aftermath of the flood, funds, materials, and volunteers poured into the area to help with the clean-up and recovery effort.

More than 300 “Oklahoma Houses”, and early form of manufactured housing, were set up to house the homeless, a surviving example of which is on display at the Johnstown Flood Museum.

These no-frills homes were a godsend to those who were left with nothing but the clothes on their backs.

Nearly 100 newspaper reporters from across America descended on Johnstown to cover the flood story, and while some of their stories were sensationalised to sell more papers and increase profits, the coverage did help raise nearly four million dollars for the relief effort from within the U.S. and 12 foreign countries.

The Johnstown Flood Museum is located at 304 Washington Street, Johnstown PA 15901, on the corner of Washington and Walnut Streets.

Ironically (or perhaps fittingly), the Johnstown Flood Museum is housed in the former Johnstown Public Library, built with funds provided by Andrew Carnegie (prominent member of the South Fork Fishing and Hunting Club) AFTER the 1889 flood destroyed a previous library at the same spot.

You enter and exit through the gift shop, which is stocked with a variety of flood-related books, prints, posters, and knick-knacks.

In addition to informational displays and artifacts, a large 3D interactive relief map takes up a big chunk of the first floor of the museum, giving you a great visual overview of the 14 mile-long path of the flood.

The second floor of the museum features a movie theatre which shows “The Johnstown Flood” (a 26-minute film that won the Academy Award for Best Documentary, Short Subject) every hour.

An interesting footnote to the 1889 flood story can be found just a few blocks from the Johnstown Flood Museum, at a small park in front of City Hall.

Morley’s Dog is a cast iron lawn ornament that survived the Johnstown Flood of 1889, and became a symbol of the strength and resiliency of the citizens of Johnstown.

The Johnstown Flood National Memorial was authorized by the U.S. Congress in 1964, and encompasses and preserves the remains of the South Fork Dam, the former Lake Conemaugh lakebed, the farm of Elias Unger, and the clubhouse and cottages of the South Fork Fishing and Hunting Club, owners of the lake and dam in 1889.

Hinckston Run Falls is a man-made waterfall formed by the outflow of the Hinckston Run Reservoir near Johnstown.

Fans of all things old, abandoned, and slightly creepy will find the abandoned Cresson State Prison in Cambria County a joy to explore!

Yoder Falls in neighboring Somerset County requires a short-but-steep hike on property owned by the City of Johnstown (but open to public hiking).