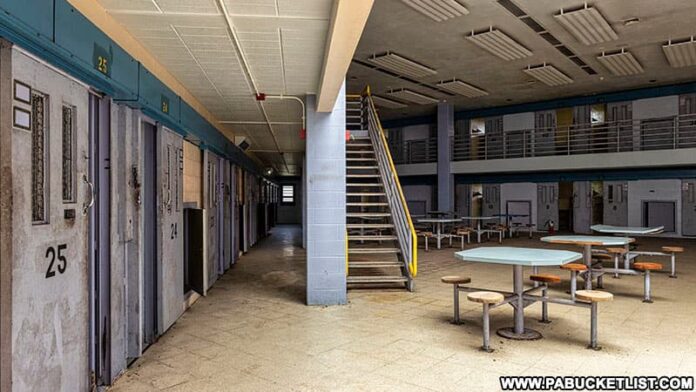 If you love exploring abandoned buildings and/or historic structures, the abandoned Cresson State Prison (AKA SCI Cresson, AKA the Haunted Cresson Sanatorium) seems almost too good to be true!

Let me reiterate: THE PRISON GROUNDS ARE NOW PRIVATE PROPERTY – YOU MUST SCHEDULE AN APPOINTMENT TO VISIT!

What began as the Cresson Tuberculosis Sanatorium when it opened in 1913 morphed over the years into a state hospital and finally a state prison (SCI Cresson).

SCI Cresson opened in 1987 as a medium-security correctional facility for male inmates.

SCI Cresson closed June 30, 2013, with the State citing the antiquity of the prison and rising costs of maintaining it as the primary reasons for the closure.

Now SCI Cresson sits mostly abandoned on a parcel of land just off of Route 22 between Altoona and Ebensburg.

I said mostly abandoned because at least part of the former prison grounds is now being used by a new company for a new purpose.

Hydroponic Life took over the SCI Cresson campus in late 2019 with plans to build hydroponic equipment, grow hydroponic produce and hemp, and develop sustainable energy projects on the property.

Though the day-to-day focus of Hydroponic Life is on growing crops and building equipment for other hydro farmers, they began offering photographers and explorers a chance to tour portions of the former prison in May of 2021, as a way to help offset the costs of restoring vandalized infrastructure more quickly.

They plan to continue offering events throughout 2022 while simultaneously remodeling, cleaning, and protecting the historical buildings at the abandoned Cresson State Prison.

What You’ll See at the Abandoned Cresson State Prison

The portion of the prison grounds made available for tours by the folks at Hydroponic Life (AKA Big House Produce) is MASSIVE!

Wear study boots and bring a flashlight, so that you are prepared to safely explore the former prison grounds.

The tours are self-guided and self-paced, and there is really no right or wrong way to make your way around and through the various structures.

You definitely WILL encounter flaking paint, broken glass, dark corridors, and other hazards typical when exploring abandoned buildings, so dress appropriately and come prepared for that.

By voluntarily exploring this location, YOU assume the risk of any personal injury or damage to personal property, and shall not hold the author liable for any injuries, losses, or damages that may occur while visiting.

Exploring the Cell Blocks at the Abandoned Cresson State Prison

The cell blocks in the various housing units at the former SCI-Cresson were built in several different eras.

There is no artificial light in any of the buildings, leading to some dramatic natural light and shadow combinations.

Some of the older cells have an enormous amount of peeling paint coming off the ceiling and walls, thus my recommendation to bring a dust mask along.

The more modern cells are far “cleaner”, but still not somewhere I’d want to call home!

Some of the older housing units are three stories high, while the more modern ones are only two stories high.

Inmate phones in the cell blocks were controlled by panels like the one below.

Corrections officers kept an eye on the cell block from behind reinforced glass windows.

Although some of that glass has since been shattered at the hands of vandals.

Essentially every building at the former SCI Cresson had some form of access control room.

This drinking fountain in one of the older cell blocks once quenched the thirst of the medium-security prisoners housed here.

Grace Chapel was built in 1914, as part of the original Cresson Tuberculosis Sanatorium.

This might have been my favorite building to explore, as even with the ravages of time and vandalism, it still (fittingly) retains its grace and beauty.

If you visit, be sure to check out the exquisite small details like this rear door to the chapel.

A painting of Jesus in the foyer still greets visitors to the chapel as it has for many, many years.

If you like exploring older churches, you’ll enjoy the fine details that went into building Grace Chapel.

The Gymnasium at the Abandoned Cresson State Prison

The hardwood basketball court at the former SCI-Cresson is definitely showing its age, although at one time I’m sure it was magnificent.

No doubt countless pick-up games were played on this court over the years the prison was in operation.

One thing I noticed in here was echos of my footsteps seemed just a bit eerie!

A weight room off the side of the gymnasium is a throwback to the 80s, when multi-station weight machines became all the rage.

The kitchen (above) and the laundry (below) are just two of the more interesting service areas I explored while visiting the abandoned Cresson State Prison.

Exploring the Building Exteriors at SCI-Cresson

The Tudor-style structures dating back to the original days as a tuberculosis sanitorium are some of the more interesting building facades at the abandoned prison complex.

Contrast that with other areas of the prison where the more modern, industrial-style buildings are prominent features.

Almost all of the buildings have either a number or a letter emblazoned on them.

No matter where you look, you’ll see plenty of razor wire and chain link fences.

I enjoyed seeing the contrast of wildflowers juxtaposed against those fences and razor wire throughout the complex.

If you can ignore the fences and razor wire, it’s not hard to imagine yourself on the grounds of a grand English manor in the countryside, at least among the Tudor-style buildings.

Scheduling a Visit to the Abandoned Cresson State Prison

To schedule your own visit to the abandoned Cresson State Prison, contact Hydroponic Life / Big House Produce at this link.

You can find out more about Hydroponic Life / Big House Produce by following their social media on Facebook and/or Instagram.

The grounds here are so massive that I made a second full-day visit in November of 2021.

On this visit I got to check out the tunnels that run BENEATH the complex.

As well as the prison power plant.

My trip report from my second visit contains more than 50 new photos as well!

Looking for even more abandoned places to explore in Pennsylvania that won’t have you running from the law?!

Then be sure to check out 28 Abandoned Places in PA You Can Legally Visit!

Road Tripping to the Best Abandoned Places in PA will take you on an epic 379 mile route to seven of Pennsylvania’s most intriguing abandoned places!

The Allegheny Tunnel (known originally as the Summit Tunnel) in nearby Gallitzin was the longest railroad tunnel in the world at the time of its completion, at 3,612 feet.

Completed in 1854, the Allegheny Tunnel is still in use to this day, and the Gallitzin Tunnels Park next to it is a popular spot for railfans to congregate and watch trains enter and exit this historic tunnel.

In conjunction with the Allegheny Tunnel mentioned above, the Horseshoe Curve allowed trains to cross back and forth over the steep Allegheny Mountains, something that had been impossible before 1854.