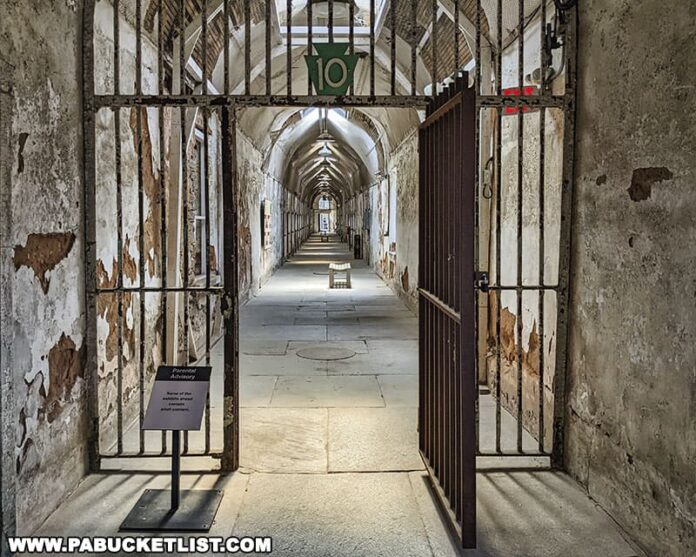 Eastern State Penitentiary in Philadelphia is America’s most-historic (and some say most-haunted) prison!

This was the world’s first true “penitentiary,” a prison designed to inspire penitence, or true remorse, in the hearts of prisoners.

Known for its grand architecture and strict discipline, Eastern State Penitentiary was the most famous and expensive prison in the world when it opened in 1829.

The prison closed in 1971, and slowly descended into ruin over the next 20 years.

Saved from the wrecking ball and now owned by a non-profit organization, Eastern State Penitentiary operates as a year-round museum and historic site.

Design of the Prison

Designed by British architect John Haviland, Eastern State Penitentiary has a hub-and-spoke look to it.

Cell wings radiated in a circle from a central guard room and tower, where the prison could be kept under constant surveillance.

It was thought that by placing inmates in a solitary cell with only a Bible for reading material, they would become penitent (hence the word “penitentiary”).

By 1913, overcrowding forced and end to the solitary confinement policy, and the prison was transformed into a more modern facility, with multiple inmates per cell and recreational team sports allowed.

The prison closed in 1971, with many of the prisoners and guards being transferred to Graterford Prison, 30 miles north of Philadelphia.

The property sat abandoned for more than 20 years, until it was purchased by a non-profit, stabilized to make it safe, and reopened as a museum and tourist attraction in 1994.

The prison is now designated a National Historic Landmark.

Eastern State Penitentiary is currently open for daytime tours every day from 10:00 am to 5:00 pm (closed on Thanksgiving, Christmas Eve, Christmas Day, and New Year’s Day).

Tickets can be purchased in-person or online – please check out Eastern State’s OFFICIAL WEBSITE for the current pricing and ticket availability.

Included in the price of admission is an audio tour (narrated by actor Steve Buscemi) that allows you to listen to descriptions of what you are seeing at numbered stops around the prison grounds.

Some areas have been cleaned up enough to allow tourists to walk through them safely.

Others are preserved in their abandoned state, and while you can see them through the bars, you can’t walk through them.

Some cells have been turned into art installations.

On Death Row, the bars have been replaced with clear plastic tubes.

The prison’s greenhouse is in remarkably good shape.

As is this guard tower, although you cannot go up inside of it on your tour.

The Prisons Today exhibit takes a look at what the American criminal justice system looks like in modern times.

The exhibit raises some interesting questions and illustrates some harsh realities of what faces both inmates and guards/staff in today’s prison system.

Al Capone is arguably the most famous prisoner ever housed at Eastern State Penitentiary.

A reproduction of Capone’s rather lavishly-decorated cell is one of the highlights of the tour.

It seems likely that Capone’s favorable living arrangements during his time at Eastern State Penitentiary were due to some hefty bribes being paid to those running the show!

Eastern State Penitentiary has been the site of many film productions, including the 1995 flick 12 Monkeys, starring Brad Pitt and Bruce Willis.

Tina Turner also filmed a music video here, appropriately enough for a song on the Mad Max Beyond Thunderdome soundtrack.

Eastern State Penitentiary has been the subject of numerous television programs and films about hauntings, including Ghost Hunters, Ghost Adventures, and MTV’s Fear.

If you believe in the supernatural/paranormal, then it is certainly not implausible that with a history dating back nearly 200 years, this prison MAY have some strange vibes about it, to say the least.

While I did not encounter any ghosts on my tour, the eerie beauty of Eastern State Penitentiary easily made this one of the most interesting places I’ve explored in 2022 (so far!).

I felt like the museum did a nice job balancing the need to make this place “safe” for tourists with keeping it just “ruined” enough to make it interesting.

It reminded me a lot of exploring the abandoned Cresson State Prison in Cambria County, and what that facility will likely resemble in the years ahead as it morphs into a bigger tourist attraction.

Eastern State Penitentiary has been inspiring awe and fear (and probably some penitence) into people for nearly 200 years; I’d definitely put this near the top of your “must-sees” when visiting Philadelphia!

As I mentioned briefly, the Cresson State Prison in Cambria County is another former state prison that was abandoned and subsequently morphed into a tourist attraction.

Rumors of hauntings and paranormal activity have made the abandoned Cresson State Prison yet another must-see location for those interested in the supernatural!

If the “old and abandoned” aspect of Eastern State Penitentiary is appealing to you, be sure to check out my article 30 Abandoned Places in PA You Can Legally Explore!

Whether they were abandoned due to natural disasters or technological obsolescence, these fascinating spots around PA all have one thing in common – the Earth is slowly reclaiming them, and one day they will all be but distant memories.

Visiting the Rocky Statue and Steps at the Philadelphia Art Museum is your guide to paying homage to Philly’s favorite fictional son, Rocky Balboa.

You’ll find both the Rocky statue and Rocky Steps on the southeast side of the Philadelphia Museum of Art (5 blocks from Eastern State Penitentiary), both completely free to visit!