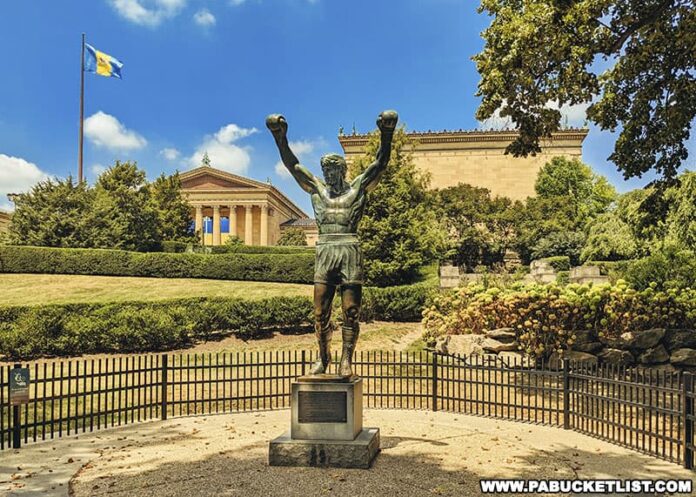 The Rocky Statue and Steps at the Philadelphia Museum of Art are iconic cultural symbols of the City of Brotherly Love, and two of its most popular tourist attractions.

The fact that a life-size replica of Rocky Balboa can be found mere steps from Independence Hall shows you just how seriously this city takes this Sylvester Stallone-created fictional boxer!

The 1976 film Rocky, written by and starring Sylvester Stallone, tells the tale of a blue-collar Philadelphia boxer (Rocky Balboa) who gets an unlikely shot at fighting the heavyweight champion of the world, Apollo Creed (played by Carl Weathers).

The film was a critical and box office success, spawning a series of sequels, including the 1980 flick Rocky III, for which Stallone commissioned the creation of a bronze statue of Rocky for use in the movie.

After filming was completed, Stallone donated the statue to the City of Philadelphia.

Visiting the Rocky Statue in Philadelphia

Since 2006, the Rocky statue has been located at the bottom of the stairs at the Philadelphia Museum of Art, and it has become one of the “must-see” photo-ops when visiting the city.

I visited on a July afternoon when the museum was closed and only had to wait a few minutes to get my photo with the fictional boxer, but reviews I’ve read online suggest wait times can be considerably longer when the art museum is open.

Visiting the Rocky Steps at the Philadelphia Museum of Art

The reason the location of the Rocky statue is so appropriate is because in the original Rocky film, Rocky runs the art museum steps as part of his cardio training (something you’ll still see people doing to this day if you visit).

I chose to leisurely ascend the steps and take in the view from the spot made famous in the film, which is impossible to miss.

And what a spectacular view it is!

I recruited a fellow tourist to snap a photo of me in the classic Rocky pose.

And of course I had to get the “sneaker shot” as well, though I managed that without assistance.

Don’t neglect to turn around – the Philadelphia Museum of Art is itself quite a work of art and architecture, resembling a Greek temple.

The building was constructed with dolomite quarried in Minnesota, and completed in 1928.

To this day, Rocky is considered one of the greatest sports films ever created, an enduring tale of a blue collar guy rising to fame due to hard work and determination in the face of seemingly-insurmountable odds.

That the fictional boxer has been embraced so completely by the City of Philadelphia, with popularity rivaling that of the Founding Fathers, is something uniquely “Philly”.

And if you’d like to pay homage to Philly’s favorite fictional son, you’ll find both the Rocky statue and Rocky Steps on the southeast side of the Philadelphia Museum of Art, both completely free to visit!