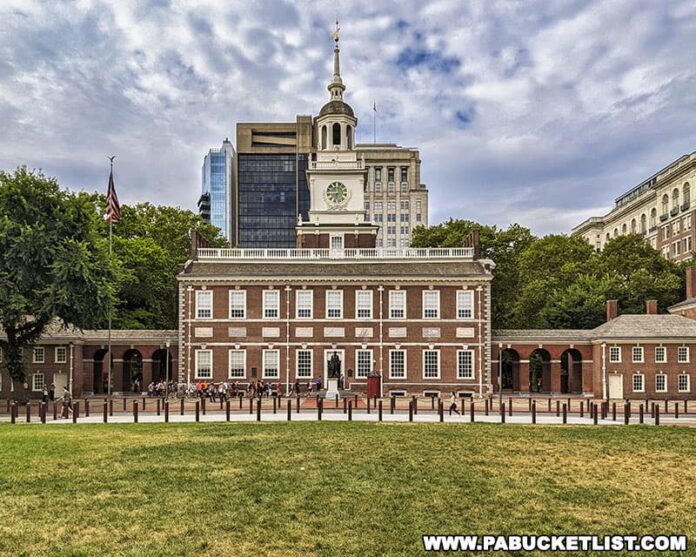 In 1776, the Second Continental Congress signed the Declaration of Independence here.

Eleven years later, in the same room, delegates to the Constitutional Convention created and signed the United States Constitution.

Although known today as Independence Hall, the building was constructed to be the Pennsylvania State House.

It once housed all three branches of Pennsylvania’s colonial government.

Today Independence Hall is the centerpiece of the Independence National Historical Park, and has been designated a UNESCO World Heritage Site.

Independence Hall is open for tours daily from 9 am to 7 pm.

Entrance is by guided tour only, and timed entry tickets are required from March through December.

No tickets are required after 5pm; entrance is first-come, first-served.

What You’ll See on the Tour

Tours are led by a National Park Service Ranger, and begin by entering through the front door of Independence Hall, near a statue of George Washington.

Above the bench where the four judges sat hangs a beautiful painting of the Pennsylvania State Seal.

The second stop on the tour is the Assembly Room.

The Declaration of Independence and U.S. Constitution were both signed in this room.

In the 1850s, the Assembly Room became a shrine to the founding of the nation, proudly displaying the Liberty Bell and original paintings of the Founding Fathers.

President-elect Abraham Lincoln visited this shrine-like room in 1861, as he journeyed to Washington D.C. for his inauguration.

After his assassination in 1865, President Lincoln’s body returned to the Assembly Room to lie in state for two days, where more than 85,000 mourners passed by the casket.

While you cannot get close to the actual “Rising Sun Chair” where George Washington sat while presiding over the Constitutional Convention in 1787, you can sit in an exact replica of it at the nearby Independence Visitor Center.

The tour moves back out into the hallway between the two chambers, where you’ll see a grand staircase leading to a second floor.

While the second floor is not part of the tour (at least not as of July 2022), it once housed the Governor’s office, and was used in the time the British occupied Philadelphia during the Revolutionary War as a prison hospital for American POWs.

You’ll also notice many ornate wood carvings in this hallway between the two lower chambers of the building.

From here you can take a self-guided tour (no ticket required) of the West Wing of Independence Hall, which houses an exhibit called the Great Essentials.

In this smaller chamber you’ll find original copies of the Declaration of Independence and the United States Constitution, as well as the inkwell used to sign both documents.

There is no more important or historic site in the United States that Independence Hall in Philadelphia.

The debates, decisions, and documents associated with this building literally gave birth to the Nation, and have shaped every American’s lives to this very day.

Visiting the exact spot where the United States got its start is a pilgrimage that, in my humble opinion, every American should make at least once in their lives.

The Pine Creek Declaration of Independence, as it has come to be known, was signed on July 4, 1776 beneath an elm tree on the west bank of present-day Pine Creek in Clinton County.

The signers were a group of frontier settlers known as the Fair Play Men, and they signed their own declaration of independence from Great Britain at about the same time as the final draft of the Declaration of Independence was being approved by the Continental Congress meeting in Philadelphia.

Although he signed neither the Declaration of Independence nor the Constitution, Rocky Balboa certainly rivals the Founding Fathers for fame in Philadelphia!

Visiting the Rocky Statue and Steps at the Philadelphia Art Museum is your guide to paying homage to Philly’s favorite fictional son.

You’ll find both the Rocky statue and Rocky Steps on the southeast side of the Philadelphia Museum of Art, both completely free to visit!